Under fire from hard-line foes, Expediency Council chairman Sadegh Amoli Larijani appears to be gearing further to the right — but such maneuvering appears bound to fail. 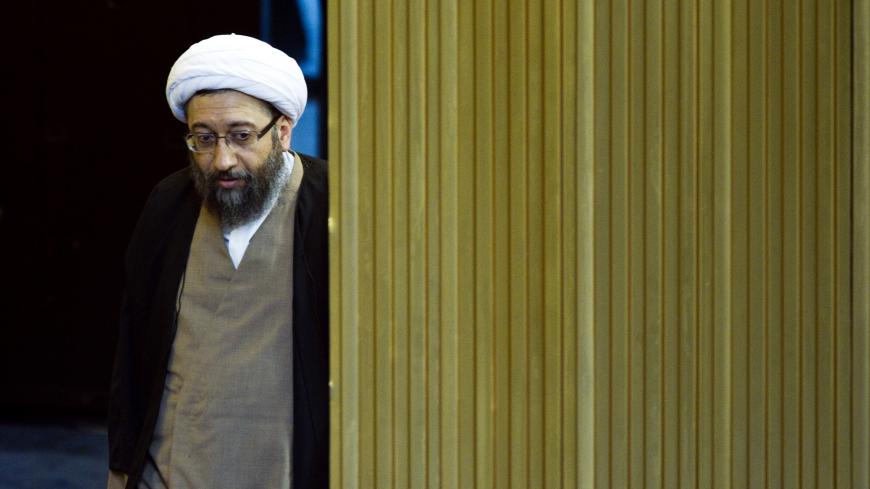 An unpopular figure among almost all of the political currents, Larijani was in December appointed chairman of the Expediency Council, which is tasked with resolving disputes between the parliament and the Guardian Council. During his tenure as judiciary chief, Larijani tolerated little criticism — even from hard-liners and conservative figures — leading to the judicial branch’s lodging of constant lawsuits against political activists.

Javad Karimi Ghodoosi, a controversial hard-line member of parliament known for his harsh allegations against moderate President Hassan Rouhani and Foreign Minister Mohammad Javad Zarif, has particularly had his eyes set on Larijani. On May 8, Karimi Ghodoosi took to Twitter to allege that Larijani is residing at a special complex reserved for foreign guests of the judiciary. He then advised Larijani to follow the footsteps of low-ranking clerics and live a simple life.

In reaction, the Expediency Council released a statement May 8 describing the allegations as “untrue” and “cruel.” The council said that while Larijani was living in the quarters cited by Ghoddosi, they were neither luxurious nor reserved for foreign dignitaries.

Meanwhile, the judiciary notably did not throw its weight behind its former head, showing no reaction. This may be rooted in the frosty relationship between Larijani and his successor, Ebrahim Raisi.

Larijani, when he was named head of the judiciary in 2009, kept on Raisi as first deputy. But in 2014, he unexpectedly replaced Raisi — who had held the post for a decade — with Gholam-Hossein Mohseni-Eje'i. Raisi was demoted and named prosecutor general.

In March, a group of hard-liners accused Larijani and senior conservative figure Akbar Nategh Nouri of being involved in a land-grabbing scandal. A hard-line group calling itself the Justice-Seeker Student Movement wrote a formal letter to Raisi, calling for a probe into “possible violations of the law” by Larijani in the affluent suburb of Lavasan, where he was accused of the land grab.

The hard-line Farheekhtegan daily has labeled this scandal as the “black box of land grabbing in Iran.” A documentary has been made about the issue, and its director Milad Goudarzi, a hard-line activist, has spoken about the scandal on the conservative-controlled state broadcaster. He alleged that despite the opposition of the governmental Urban Planning and Architecture Council of Iran and Supreme Leader Ayatollah Ali Khamenei, two small towns are effectively being built in Lavasan. In their letter, the Justice-Seeker Student Movement asked for the “maximum punishment” if he is found guilty.

On May 16, in a summit with students, Raisi announced that the Lavasan case is being pursued by the judiciary, saying, “In countering financial corruption, we have no red line. Anyone in any economic, social and political position, if having engaged in corruption, will be investigated.”

What should not be neglected here is that Larijani’s family is largely unpopular among the public and political currents, especially hard-liners. Hard-liners loathe parliament Speaker Ali Larijani — the older brother of Sadegh Larijani — for defending Rouhani and for the speaker's significant role in passing the 2015 nuclear deal in parliament. In addition, in 2013, former hard-line President Mahmoud Ahmadinejad released a secretly recorded video in parliament he said showed that Fazel Larijani, Sadeghi Larijani’s younger brother, had tried to bribe a governmental official. But during his chairmanship of the judiciary, Larijani did not appear to allow the latter case to be fully pursued. Of further note, his older brother, Mohammad Javad Larijani, has also been accused of land grabbing.

Apparently feeling the heat, Larijani seems to have sought to approach hard-liners more than in the past and appears to have made a U-turn in his position on the passing of two bills that Iran needs to approve in order to exit the blacklist of the Paris-based Financial Action Task Force (FATF).

The FATF is an intergovernmental body tasked with combating money laundering and terrorism financing. In 2016, it temporarily took Iran off the FATF blacklist pending Tehran’s adoption of a series of measures. If Iran fails to comply with the FATF requests, it will be put on the black list again, alongside North Korea. Of the four main bills on money laundering and terror financing that the Iranian government has submitted to parliament, and which lawmakers have approved, the fate of two of them remains unclear given the Guardian Council’s rejection of them.

Given this dispute, the Expediency Council — which Larijani chairs — has final say. Whereas the former judiciary chief previously spoke in support of passage of the bills, he recently joined the hard-liners in expressing opposition to the legislation. Larijani reportedly removed the bills from the top of the agenda of the Expediency Council, even as Iran has only a month left to comply with the FATF action plan.

It could be that Larijani’s apparent efforts to sway the hard-liners may not have the intended effect as the hard-liners likely have their eyes set on a larger objective, that of preventing Larijani from being named as the new secretary of the Guardian Council. The official IRNA news agency has reported that Larijani may succeed 92-year-old hard-line Ayatollah Ahmad Jannati, who has been Guardian Council secretary since 1992. Jannati recently sought to resign from two other positions he had long held, including Friday prayer leader of Tehran.

As such, Larijani may face tough days ahead — particularly since he appears to have made a lot of enemies for himself during his time as judiciary chief.