Iran’s parliament speaker, while long a figure in the conservative camp, appears to be gaining Reformist backing for a potential presidential bid in 2021. 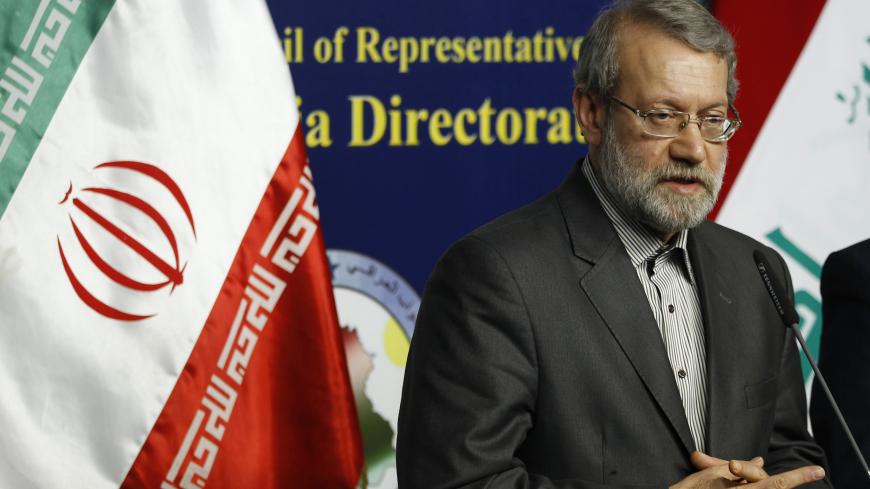 Iran's parliamentary speaker Ali Larijani is under fire by hard-liners over his role in lawmakers’ recent approval of bills related to the Financial Action Task Force (FATF). In this vein, hard-liners are reminding the Iranian public of Larijani's cooperation with President Hassan Rouhani in selling the nuclear deal to Iranians, arguing that Larijani is being groomed for the 2021 presidential election.

Iran's parliament passed the Combating the Financing of Terrorism bill on Oct. 7, one of the four key bills that parliament must approve for Iran to be removed from the FATF blacklist. It took parliament months to pass this controversial bill due to the determination of hard-liners to stop it. Hard-liners believe the bill would cut Iran's ties to the "Axis of Resistance" — an argument refuted by the Reformists, who say the FATF only recognizes groups as terroristic if they are described as such by the United Nations.

The Oct. 7 parliament session turned into a real competition between the Reformists and hard-liners over the FATF bills. It was reminiscent of the day the lawmakers approved the Joint Comprehensive Plan of Action back in 2015, despite the uproar from hard-liners.

The FATF is an intergovernmental organization created in 1989 to combat money laundering and terrorism financing. Iran's presence on the FATF black list was suspended in 2016. Following Tehran's passing the related bills, the group has given Iran a four-month period (until February) to undertake reforms that would bring it in line with global banking norms.

Hard-liners cited Ayatollah Khamenei’s earlier remarks about international conventions as justification for preventing the passing of the CFT bill. Yet Larijani quoted the Office of the Supreme Leader as saying, "I have no opposition to these bills being reviewed in the parliament." Larijani's move may have been effective in convincing a number of conservatives to vote for the CFT bill.

Hard-liners compare Larijani to an infamous figure in Islamic history

The hard-liners’ reaction to Larijani's attempts to persuade parliament to vote for the CFT bill was harsh. Vatan-e Emrooz, a leading hard-line newspaper, dedicated its front page to the CFT issue, condemning Larijani for his "willingness" to give up anything the West wants from Iran.

Meanwhile, on Twitter and other social networks, the reactions were worse. Hard-liners created the hashtag "Larijani's betrayal" and compared him to Al-Ash'ath ibn Qays, who played an influential role in forcing the first Shiite Imam Ali bin Abi Taleb to accept arbitration even though he was close to victory in the Battle of Siffin in 657. Moreover, a short clip of hard-line parliamentarian Javad Karimi Ghoddousi was released to the media, in which he stated that Larijani and Rouhani are examples of the “betrayers” that Ayatollah Khamenei has spoken about.

What shouldn’t be neglected here is that Larijani, once known as a hard-liner, has dealt with crucial issues in a down-to-earth manner over the past decade. Since the final years of Mahmoud Ahmadinejad's presidency (2005-13), Larijani's distance from the hard-liners and the conservatives grew, reaching its peak with his cooperation with the Reformist-backed Rouhani on many key issues, including the 2015 nuclear deal.

Reformists hail Larijani's management, raising the possibility of backing him as president

In return, the Reformists have welcomed Larijani's stance and decisions, bringing up the likelihood of supporting him in the 2021 presidential election. This would not be Larijani's first presidential campaign. In 2005, the conservatives chose Larijani, who had headed the state broadcaster for a decade, as their candidate. But other conservative figures, including hard-liner Ahmadinejad and Mohammad Bagher Ghalibaf, rejected Larijani's nomination.

Mahmoud Sadeghi, a prominent Reformist parliamentarian, praised Larijani's management of the parliament sessions, saying, "I don’t deny the possibility that the Reformists will unavoidably move to support a figure with the characteristics of Larijani."

Furthermore, Mohammad Atrianfar, a leading Reformist activist, stated on Oct. 8 that Reformists reaching a consensus over Larijani "is probable. If the Reformist friends reach this consensus, we all have the duty to back Mr. Larijani."

In an Oct. 13 interview, parliamentarian Naghavi Hosseini claimed he had credible news that Larijani's nomination in the next presidential election was certain.

He also described the abovementioned remarks by Atrianfar as the result of Larijani's efforts to attract moderate Reformists. By "moderate reformists," he refers to a number of Reformists who are flexible and ready to form a coalition with someone like Larijani, who has a conservative background.

In this vein, hard-line ANA news agency wrote on Oct. 20, "Reformists' [backing of] Larijani as well as [his] suspicious meetings are among the signs indicating Larijani's nomination in the 2021 presidential election. On one hand, Larijani sits next to [former Reformist President] Mohammad Khatami, who had an active role in the 2009 sedition … and on the other hand, he approaches the [Rouhani] government to accompany them by passing bills like [those related to the] FATF. These signals show a clear goal by a spectrum of Larijani's fans, especially the Moderation and Development Party and a section of Reformists for reaching a consensus over Larijani."

Of note, the hard-liners believe that Khatami, who threw his weight behind opposition figures Mir Hossein Mousavi and Mehdi Karroubi, is not loyal to the political system anymore, and they have even put a media ban on him.

In sum, the hard-liners' railing against Larijani is probably intended to drive a wedge between Larijani and the old guard of the conservative camp. At the same time, all these attacks could be part of a broader strategy to both discredit him among the old guard by portraying him as a Reformist-backed candidate acting against the will of the supreme leader and also to unseat him in parliament's next speakership vote, which is held every year. Nonetheless, if Larijani decides to run in the next presidential election, he faces a bumpy road ahead. He has to overcome the hard-liners' coup against him in his own camp and also gain the approval of the entire spectrum of Reformists, assuring them he is committed to their notions, because the Rouhani experience has not been pleasant for them.