While former Reformist President Mohammad Khatami's call for national reconciliation earlier this year was roundly rejected by Iranian conservatives, the initiative may finally take off with Principlist parliament Speaker Ali Larijani at its helm. 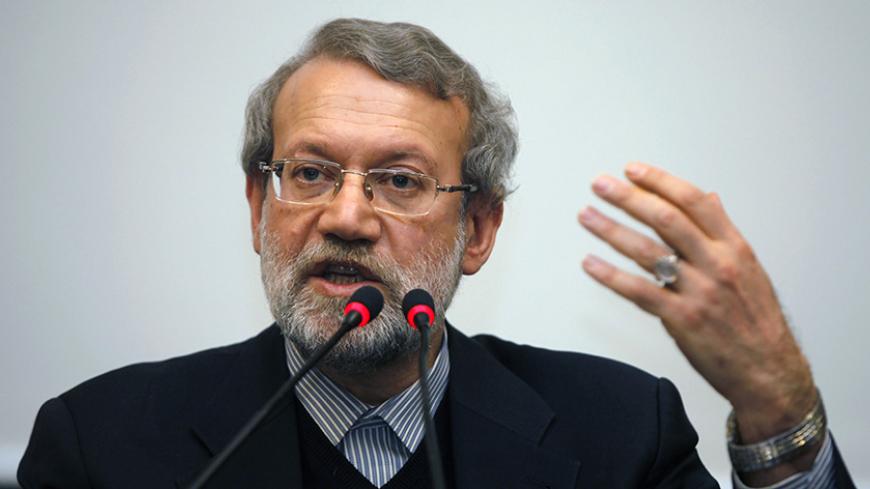 Parliament Speaker Ali Larijani and prominent Reformist lawmaker Mohammad Reza Aref have reached a consensus on setting up a committee to do preparatory work for what has been dubbed the National Dialogue Plan. The initiative has been discussed in recent months by members of the Hope (Omid) faction, a Reformist parliamentary bloc led by Aref.

As its running theme, the plan encourages a dialogue-based solution to discrepancies and disputes between political groups in a bid to reduce factional tension and sniping.

The fact that Larijani, a Principlist heavyweight, has agreed to join the initiative is particularly promising. A similar call for a national dialogue by former Reformist President Mohammad Khatami (1997-2005) earlier this year was deplored and roundly rejected by hard-liners in the Principlist camp.

Khatami had said "nobody should get stuck in the past" while emphasizing to his supporters that this shouldn't be taken as an effort "to appease [political opponents] and forgo our rights." Explaining the timing of his call, Khatami cited concerns over the future of "the country, and its ruling establishment, national interests and prestige." However, Khatami's call was scuttled by skepticism among hard-liners who believed that his inner circle aims to re-enter national politics after being sidelined because of the unrest following the 2009 presidential elections, dubbed the "sedition" in state discourse.

Although both of the national dialogue plans are similar, they are different in scope. Unlike Khatami, Larijani and Aref intend to give substance to the idea on a limited scale, with only political groups initially involved. A more inclusive, nationwide version of the initiative would then be on hold until there is fertile ground for it to grow.

The national dialogue framework urges political groups to discuss sticking points seriously and face to face. "The reason why we can't reach a constructive agreement on solving problems is lack of direct negotiations. Instead, we usually talk about problems in public and this creates conflict," Bahram Parsaei, spokesman for the Omid parliamentary faction, told Al-Monitor.

Larijani is the first Principlist to have formally embraced the push for what has been called national reconciliation. It notably comes less than a year after Larijani's successful battle against Aref to become parliament speaker once again. Since then, Aref has been presiding over a 120-member bloc of Reformist lawmakers in the 290-seat parliament. Larijani is considered as the leader of the Principlist and independent groups in parliament.

The nascent effort to forge cross-factional engagement between the rival Principlist and Reformist factions is of great consequence because it has not occurred over the past 20 years, a timespan which has been characterized by partisan hostility and conflict. A reduction in conflict was rare even when parliament was primarily dominated by Principlists, with the legislature often turning into a stage for clashes between center-rightists and rightist lawmakers. In the eighth (2008-12) and ninth (2012-16) parliaments, Gholam Ali Hadad Adel and Larijani steered hard-line and center-right parliamentarians respectively. It was during this time that Larijani slowly distanced himself from the Principlist camp, tilting toward the rival Reformist wing. In the February 2016 parliamentary elections, the moderate-Reformist coalition counted Larijani on their ticket even though he announced that he would run as an independent.

Ahmad Mazani, a Reformist lawmaker who has worked on the national dialogue plan, told Al-Monitor that Larijani's turn away from the Principlists was due to their view of all issues through a political lens at the expense of rational approaches. This is after Reformists considered Larijani as their key rival for a decade (1994-2004) when he led the state broadcasting agency. Larijani was widely accused of utilizing the Islamic Republic of Iran Broadcasting to pursue factional interests and depict a distorted image of the Khatami administration, which was in power from 1997 to 2005.

In this context, Larijani's decision to join hands with Aref to give substance to the national dialogue initiative is a strong hint that he is moving away from the Principlist current. Over the past four years, the influential speaker has thrown his full support behind the Reformist-backed administration of President Hassan Rouhani.

Although Larijani has not directly endorsed Rouhani, who is seeking another term in office in the May 19 presidential elections, the speaker's close center-right comrades fully back the moderate president. Previously, Behrouz Nemati, spokesman for the parliament's presiding board, and Kazem Jalali, head of the parliament's research center, both endorsed Rouhani — an indirect message that Larijani shares their stance.

Moreover, Larijani's maneuvering also makes sense when considering the backdrop of events that caused other senior Principlist figures to move away from the camp. Prominent examples include Ali Akbar Velayati, the current chairman of the Center for Strategic Research and former foreign minister (1981-1997) and Ali Akbar Nategh Nouri, speaker of the fourth (1992-96) and fifth (1996-2000) parliaments and current head of the supreme leader's inspection office.

The Principlist front has practically broken down as it faced fundamental, conceptual clashes and serious challenges during the second term of former President Mahmoud Ahmadinejad (2009-2013), when moderate elements of the camp turned toward Reformism.

This internal discord was perhaps most evident during the 2013 presidential elections, when the Principlist camp was represented by five candidates, all of whom competed separately against Rouhani, who had the joint backing of the Reformists, moderates and other center-right principlists. A similar scenario took place in the last parliamentary elections in February 2016. The pattern emerging in the run-up to the May 19 presidential election is quite similar.

Larijani's cooperation with Aref to embark on a new national agenda is a step forward in strengthening the emerging political coalition-building in the country. It may also be an indication that some traditional rightists have felt the imperative for such a move.

Yet, the national dialogue push is fledgling and is being raised only months after the death of one of its originators, Ayatollah Ali Akbar Hashemi Rafsanjani, who vociferously deemed it necessary to foster national reconciliation on two occasions: once after the 2009 presidential elections and later in 2011. The veteran politician pressed ahead with this agenda until his death in January, and was the most consequential figure — particularly over the last decade — to bring the state together with Reformists and critics of the establishment.

Ever since Rafsanjani's death, the question of how to fill the vacuum has been hotly debated. The national dialogue initiative can be one alternative. In fact, Khatami issued the call for national reconciliation just three weeks after Rafsanjani's death.

But only time will tell whether Larijani and Aref can lay the groundwork for the stalled national dialogue agenda proposed by Rafsanjani and Khatami.