Iran's parliament speaker moves to position himself as Rouhani’s successor 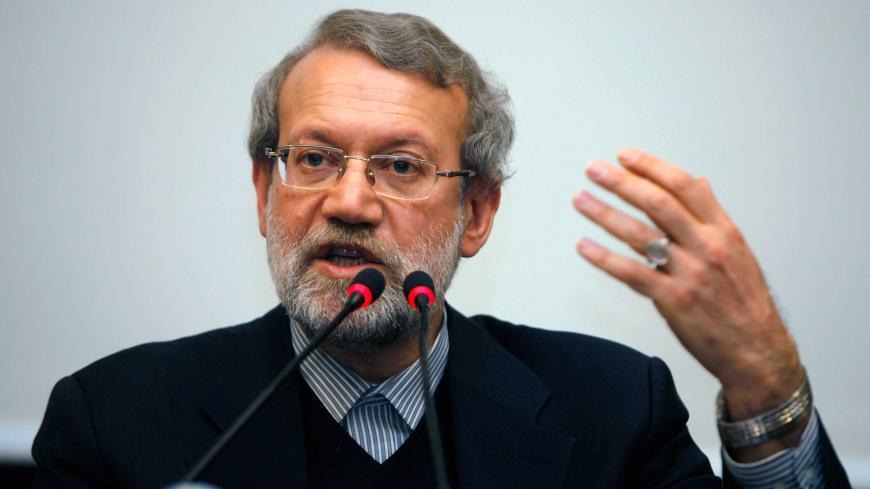 Will Iranian Reformists decide to once again support a moderate-conservative as their candidate in the 2021 presidential elections? This is a question that has come to occupy the minds of observers as a rare scene in a ceremony captured the attention of Iranian media outlets, leading Reformists to think more about their choices when President Hassan Rouhani’s second term ends.

On Sept. 22, moderate parliament Speaker Ali Larijani was seen sitting next to former Reformist President Mohammad Khatami, who is under a media ban, and talking with him seriously — a scene that did not slip through the fingers of photographers and was captured and then released to the media.

In the 2009 presidential elections, hard-liner Mahmoud Ahmadinejad was announced the winner, but Reformist candidates Mir Hossein Mousavi and Mehdi Karroubi claimed that the ballot was rigged, leading protests that ultimately caused them to end up under house arrest, where they have been since 2011. Khatami sided with Mousavi and Karroubi during the protests and has called for their release.

In the years after the contested re-election of Ahmadinejad, hard-liners branded the protests as the “2009 sedition,” and Khatami was condemned and censured by them as a seditionist along with Mousavi and Karroubi. Meanwhile, the political establishment lost its trust in the Reformists and Khatami, resulting gradually in the judiciary imposing a media blackout on Khatami.

Following the events in the aftermath of the 2009 elections, the political establishment’s mistrust of the Reformists deepened, leading to reduced opportunities for the latter to run for parliamentary or indeed any other election. Therefore, the Reformists sought to plan a return to politics step by step, preventing any action that would create fear in the political system.

As such, in the 2013 presidential elections, moderate-conservative Rouhani was surprisingly supported by the Reformists, who only had Mohammad Reza Aref as a candidate.

It should be noted that after the 2009 elections, the moderate-conservatives gradually distanced themselves from hard-liners and other conservatives, effectively establishing a new “moderate” camp led by two-time President Ali Akbar Hashemi Rafsanjani, who died in January. Rouhani’s victory in the 2013 vote was the result of a moderate-Reformist coalition, an alliance that was repeated in the May 2017 presidential elections.

Through Rouhani’s political ascent, the Reformists were given new life, and a large number of them were appointed as ministers and to high-ranking government positions.

In the 2016 parliamentary elections, the moderate-Reformist coalition was enhanced as its candidates ran on a single ticket — a strategy that clearly worked out.

During the past four years, a number of Reformists — including First Vice President Eshaq Jahangiri — have met with Supreme Leader Ayatollah Ali Khamenei to repair the Reformists’ relationship with the political establishment. The practical results of such initiatives are unknown.

But now, a number of Reformists who are critical of the moderates’ way of cooperating with them believe that they enjoy enough power and influence to run in the 2021 presidential election without having to resort to a coalition with moderates.

However, a Reformist decision to choose one of their own as a candidate in the next presidential election depends on at the very least one key issue: gaining the full trust of Iran’s political establishment. If the latter is realized, they won’t have any problems with the Guardian Council — the body tasked with vetting candidates — and their nominee would be cleared to run.

The important point here is that If the Reformists see that the political establishment’s trust in them has not been restored, they will likely go with another proxy candidate such as Rouhani — a nominee who will probably be a moderate and is proven to hold views that are close to them. In this vein, Larijani is a leading choice. Along with Rouhani, he is considered by many as the leader of the moderates; he is also detested by conservatives and hard-liners for having turned away from them.

Indeed, Larijani has been slammed by hard-liners and conservatives repeatedly for various reasons. In the aftermath of the 2009 elections, he attempted to appease both sides, using a soft tone whenever he wanted to speak of Mousavi and Karroubi. For this, he was labeled by angry conservatives as the "silent man of the sedition."

Furthermore, during Rouhani’s first term (2013-17), Larijani fully stood behind him in his capacity as parliament speaker even as the hard-liners still had a glimmer of hope that he would join them. If it had not been for Larijani, Rouhani would have faced far more obstacles than he did, and many aspects of his pro-reform agenda would have remained futile — including the nuclear deal. Indeed, despite the loud ruckus by hard-line parliament members opposed to the landmark accord, Larijani got the nuclear deal passed in parliament in late 2015 in just 20 minutes. It was at that point that hard-liners and conservatives truly turned into one of the main foes of Larijani in Iranian politics.

Moreover, in the 2016 parliamentary elections — when many Reformists were initially disqualified — Larijani played an important role by engaging with the Guardian Council to convince the watchdog to reverse its barring of some of the Reformist hopefuls. Of further note, the conservatives excluded Larijani from their ticket in the 2016 polls while the Reformists placed him and his entourage on their list.

As such, for all practical purposes, Larijani is now considered an outcast in the eyes of the conservatives and hard-liners, particularly as he before the 2017 presidential elections signaled that he backed Rouhani, publicly stating at a press conference in March that he was a “comrade” of the president.

Additionally, Larijani is seemingly working toward lifting the house arrests of Mousavi and Karroubi, whose freedom remains high on the Reformist agenda. On Sept. 11, Mohammad Reza Khatami, a senior Reformist politician and younger brother of Mohammad Khatami, confirmed Larijani’s efforts.

Larijani’s possible nomination as a presidential candidate in the next elections has always been discussed in media, but following his appearance next to Khatami, many analyzed this scene as showing that Larijani was preparing himself for the 2021 ballot. This may be true, as senior figures in Iran are commonly aware of attendees at meetings before participating — or at least don’t sit next to the most controversial Reformist figures despite knowing they will later be scolded. Thus, Larijani seemingly might have chosen to publicly engage with Khatami to test the mood in Iranian society and among the Reformists to see the reaction to his possible candidacy in 2021, as well as to approach Khatami as the leader of the Reformist camp and the former president's supporters.

It should be noted that the hard-line Javan daily has claimed that Khatami’s media ban may be lifted and that Larijani is attempting to be the first in taking credit for it. Based on Javan’s analysis, Larijani is apparently trying to change his voter base in an attempt to widen his sphere of support. “He feels that being punched by the conservatives is not only not harmful, but also useful,” wrote Javan on Sept. 24. However, following Larijani’s appearance next to Khatami, the judiciary — headed by Sadegh Larijani, a brother of the parliament speaker — increased the limitations on the former Reformist president, forbidding him from attending public ceremonies.

For now, there is a real and ongoing internal debate among Reformists on whether to support a figure such as Larijani in 2021. A remarkable segment, such as the prominent Executives of Construction Party (Kargozaran) and Unity (Ettehad) parties, has signaled its readiness to back him. But it is still too soon to draw conclusions. One can only wait until at least the 2020 parliamentary elections and their aftermath to see the Reformists’ strategy based on the situation they will face at that time.