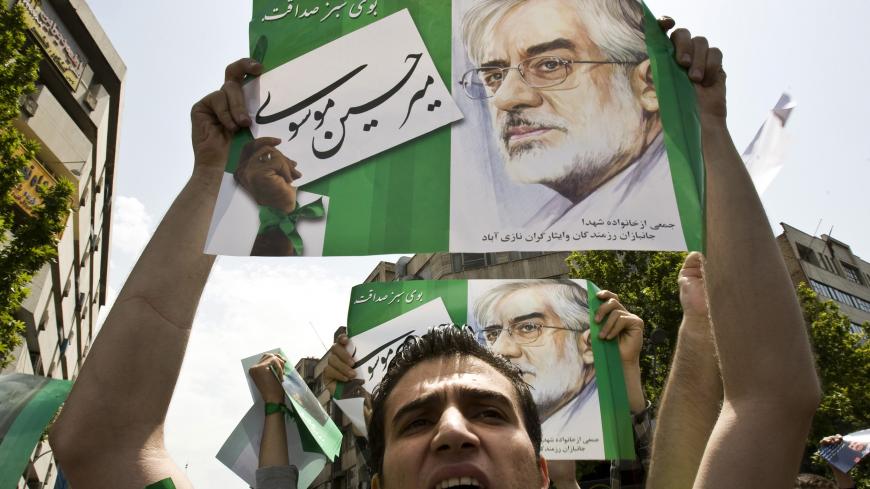 A man holds a poster of Iranian presidential candidate Mir Hossein Mousavi during a rally in support of Mousavi, after Friday prayers, Tehran, Iran, May 29, 2009. - REUTERS/Raheb Homavandi

Iranian Reformists are getting serious about boycotting the upcoming 2020 parliamentary elections. In the disputed 2009 presidential vote, the camp rallied behind contenders Mir Hossein Mousavi and Mehdi Karroubi as they faced incumbent hard-liner Mahmoud Ahmadinejad. The outcome was shocking for many, leading Reformist candidates to allege the ballot was rigged, with mass protests ensuing. The two Reformist candidates promised supporters they would stick to their commitment to “take back” their votes. This promise led Mousavi and Karroubi to be put under house arrest in 2011, but it also ultimately preserved and maintained the social capital of the Reformists.

Just over two years later in the 2013 presidential elections, Reformists — who had been marginalized owing to their unrelenting objections to the outcome of the 2009 vote — were persuaded to take part by former presidents Akbar Hashemi Rafsanjani (1989-1997) and Mohammad Khatami (1997-2005). In the wake of moderate leader Rafsanjani and Reformist icon Khatami’s efforts to get out the vote, a great number of so-called grey voters — a term for mostly reform-minded individuals who usually don’t cast their ballots — led to long lines to vote for Hassan Rouhani, a moderate cleric who at the time was mostly unknown to ordinary Iranians. After Rouhani’s victory, a similar moderate-Reformist triumph was achieved in the 2016 parliamentary elections as the Reformists used all of their social capital.

The important point here is that neither Rouhani nor the Reformist hopefuls in the 2016 parliamentary elections were the preferred candidates of the Reformist camp. In fact, in the 2013 elections, Rafsanjani was the preferred candidate but was rejected by the Guardian Council, the conservative-dominated body tasked with vetting candidates. The same dynamic unfolded in 2016 when the most prominent and outspoken Reformist candidates were disqualified from running. The Reformists were left with no choice but to put low-level and largely unknown candidates on their ticket.

The outcome of this has been particularly devastating in parliament, where Reformist parliament members lack the courage to push for sweeping change while at the same time facing a series of accusations of abuse of power and having sided with hard-line entities.

As for Rouhani, while he is often described as skilled in international relations, advancing Iran’s policies and preventing global isolation, his performance on domestic issues has been disappointing as he has been unable to fulfill most of his electoral promises, including social and political freedoms as well as an economic boom. The economy has particularly suffered since the US reimposition of sanctions in the aftermath of its 2018 withdrawal from the 2015 nuclear deal signed between Iran and six world powers.

What should not be neglected here is that hard-liners have done their best so far to block the desired path of Rouhani and Reformists, resulting in constant retreats and failures on the part of the latter. Prominent Reformists are aware of the destruction of their social capital and have acknowledged it, urging pro-reform parliament members to do something.

Criticizing the political and economic situation of the country, Khatami told a group of Reformist parliament members on March 6, “It is very difficult to tell people to vote. … Do you think people will take part in the future elections [if we urge them to do so]? It is highly unlikely unless change happens within the next year.”

All of this has caused ordinary Iranians to begin losing hope in the Reformist current’s capacity to institute significant change in the country. Facing such a danger, senior Reformist figures are thus moving to restore people’s trust — or at least preventing any further discontent with the camp among the public. Their strategy, which has been billed “conditional participation,” appears to be tantamount to the issuing of an ultimatum to the Iranian state in general and the Guardian Council in particular.

The outspoken Tajzadeh, who was jailed alongside scores of other Reformists in the aftermath of the 2009 presidential vote, then addressed the Iranian state, saying that it must accept responsibility for a possible Reformist decision not to participate in the 2020 parliamentary elections. In this vein, he warned, “Today, the people are asking what the [parliament members] are supposed to do and to what extent they have authority. If they do not have any authority, then why should we vote?” Laying blame for the failures the Reformist camp is facing on both the Iranian “deep state” and the Trump administration, Tajzadeh said the “deep state” interferes in many minor and major issues, including the appointment and dismissal of officials.

Going further, Saeed Hajjarian, a prominent Reformist theoretician, proposed sarcastically on May 11 that Rouhani ought to step down before the parliamentary elections so presidential polls could be held concurrently. This would, according to Hajjarian, end the issues pertaining to “dual governance,” paving the way for the conservative-dominated broader political establishment to take over both the government and parliament.

While Reformists have yet to make their final decision on whether to participate in the 2020 vote, it is likely that they will opt for the “conditional participation” strategy, which would drown out the minority in the camp — led by Reformist parliamentary leader Mohammad-Reza Aref — who insist on taking part in the elections at any cost.