Does Raisi need a nuclear deal more than Biden?

Also:​ The Iran talks in Vienna enter their final days, what comes next, and why neither president should expect an assist from the US Congress on Iran. 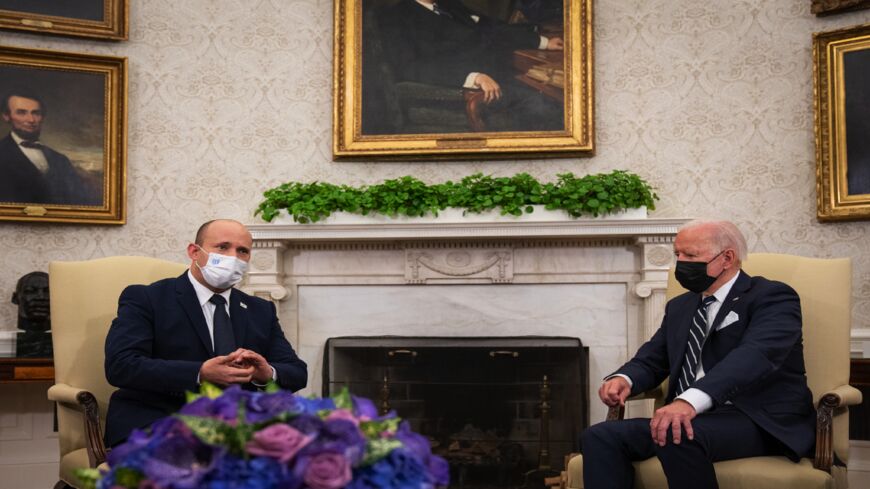 US President Joe Biden meets with Israeli Prime Minister Naftali Bennett in the Oval Office at the White House on Aug. 27, 2021, in Washington, DC. Biden and Bennett focused their talks on Iran. - Sarahbeth Maney-Pool/Getty Images

“It is not a question of weeks, it is a question of days,” said French Foreign Minister Jean-Yves Le Drian, speaking about the Vienna talks on the Joint Comprehensive Plan of Action (JCPOA) on Wednesday, Feb. 16.

State Department spokesperson Ned Price said hours later that “we are in the midst of the very final stages of the talks.”

Amwaj has the scoop here from informed Iranian sources that there is a 20-page document in circulation among the negotiating teams in Vienna, including three annexes on sanctions, nuclear commitments and implementation, meaning the sequencing of actions, which would reportedly take place over a 10-day period.

Foreign Minister Hossein Amir-Abdollahian, in an interview with the Financial Times, suggested that Congress make a “political statement” demonstrating its commitment to an agreement searching, it seems, for some political cover before closing a deal.

The early draft of the agreement focuses on unfreezing Iranian funds in exchange for Tehran releasing Western prisoners, according to three diplomats speaking to Reuters. The draft lays out steps for all parties to the deal once it is approved. As we wrote in November 2021, a “goodwill gesture” — such as the release of funds held up over US sanctions — could overcome mistrust to help revive a deal.

Iran could soon be open for business

The Biden administration’s position is “compliance for compliance,” meaning that if Iran returns to its obligations under the JCPOA for constraints on its nuclear program, the United States will waive sanctions reimposed in May 2018, including those directed on non-US persons and non-US subsidiaries of US companies engaging in financial dealings with Iran.

If the United States lifts sanctions, that means Iran is open again for business in the energy, shipping, metals, automotive, insurance and other sectors.

Iran also wants the United States to lift sanctions imposed after US President Donald Trump’s withdrawal from the deal in May 2018 — a key sticking point in the negotiations.

Iran, for its part, would need to walk back nuclear actions taken since 2018. As a result of its nuclear activities outside of the parameters of the JCPOA, Iran is now capable of producing enough nuclear fuel for a bomb in less than a year, a much shorter time frame than envisioned in 2015 — which may be impossible to walk back.

Iran’s return to compliance is of course the core demand of the other parties to the JCPOA. The International Atomic Energy Agency (IAEA), which oversees Iran’s compliance, said in September 2021 that Iran’s restrictions on access to its facilities were seriously compromising the agency’s oversight. In August, the IAEA noted that Iran was enriching uranium at 60%, well above the 3.67% cap in the JCPOA. Highly enriched uranium at 90% purity is required for nuclear weapons.

The IAEA’s next report on Iran’s compliance is due March 7 — a key signal for Iran’s progress.

So if there is indeed ”compliance for compliance,” according to the JCPOA (read it here) the following “days” are coming soon:

Transition Day (October 2023): After the IAEA reports “that all nuclear material in Iran remains in peaceful activities” and ratifies the Additional Protocol, the UN will end restrictions on missile transfers to Iran, and “the US will seek such legislative action as may be appropriate to terminate, or modify to effectuate the termination of, the sanctions specified in Annex II on the acquisition of nuclear-related commodities and services for nuclear activities contemplated in this JCPOA, to be consistent with the US approach to other non-nuclear-weapon states under the NPT.”

Termination Day (October 2025): On or about October 2025, and assuming Iran’s compliance with JCPOA constraints on its nuclear program, the UN would close the Iran nuclear file.

Why Raisi needs a deal …

Iranian President Ebrahim Raisi may want and need a deal more than US President Joe Biden.

Speaking at his swearing-in ceremony at the Islamic Consultative Assembly (or parliament) Aug. 5, 2021, Raisi said, "Sanctions against Iran must be lifted, and we will support any diplomatic plan that achieves this goal."

The incentives for Raisi are both economic and political, as we wrote in July last year.

The economic rationale for the deal is a no-brainer. Iran desperately needs relief from US oil and financial sanctions. While Iran’s economy is not on the verge of collapse, even without a deal, and is projected to achieve modest (2%) growth this year, according to the IMF, ultimately the burdens of debt, inflation and other structural challenges can only be addressed by sanctions relief.

The political rationale may be less obvious, but it’s also compelling.

Why Biden can probably live with or without a deal

Biden made re-entering the JCPOA a priority while seeking a better agreement if possible. No doubt this administration believes Iran’s nuclear program is better contained with the JCPOA in place. Biden’s Iran envoy, Robert Malley, has the mandate to make it happen, but only if Iran does its part.

Biden’s approach has been textbook diplomacy, as we wrote last March. The first order of business was to repair relations with European parties to the deal, fractured by Trump’s approach to Iran and other issues, such as the Paris Climate Accords.

That box is checked. There appears no daylight between the United States, the UK, France and Germany on Iran, whichever way the negotiations break.

The positions of Russia and China are more complicated, especially because of broader US concerns with both countries.

Both stand to benefit from the lifting of sanctions on Iran.

If there is no deal, they will seek to exploit their relationship with Iran for their own interests and challenge US interests in the region.

But Moscow and Beijing oppose an Iranian nuclear weapon, and it’s also possible, given the stakes elsewhere in the world, that they would be cautious about opening up a front with Washington on Iran, at least in a big way, or facing, especially in Russia’s case, even more sanctions.

Iranian officials likely have their reservations about Russian and Chinese support if negotiations collapse, for these reasons.

Another reason Biden can go either way is that there is no popular or political consensus for an Iran deal, and the congressional debate would be a complication — at best.  A "political statement" of support, as Amir-Abdollahian is seeking, is a nonstarter.

Senate Foreign Relations Committee Chairman Bob Menendez of New Jersey, a Democrat, scorched the Biden Iran policy in a speech this month, and Republicans have already put down a marker that they will oppose the deal, as Elizabeth Hagedorn reported.

Congressional elections in November could result in Republicans taking at least one chamber.

Former US Assistant Secretary of State Stephen Rademaker explains that the Biden administration would likely need to submit an agreement to Congress per the Iran Nuclear Agreement Review Act of 2015 (INARA):

"When Congress reviewed the JCPOA in 2015, bipartisan majorities of both houses voted to reject the deal," Rademaker writes. "Fortunately for President Barack Obama, those were not two-thirds majorities, and so the law permitted him to implement the agreement over Congress’ opposition. But those votes established the political illegitimacy of the JCPOA, laying the groundwork for President Donald Trump’s decision a few years later to repudiate it."

Israel: Making the best of the worst

As Ben Caspit reported last month, Israeli leaders are expecting that there will be an Iran deal and are planning accordingly, expanding Israel’s weapons capabilities and seeking a NATO-like alignment with friendly Gulf states, a subject of Israeli Prime Minister Naftali Bennett’s meetings in Bahrain this week.

In making the best of the worst, watch for these possible revisions to the JCPOA, advocated by Israel, if and when a nuclear deal is announced:

Update: Feb. 18, 2022. This article has been updated with information on a preliminary draft of the deal.