Two months in, Naftali Bennett and Yair Lapid remain both partners and rivals as the new government passes a budget, grapples with COVID-19 and Iran and seeks to strengthen already warm ties with the Biden administration. 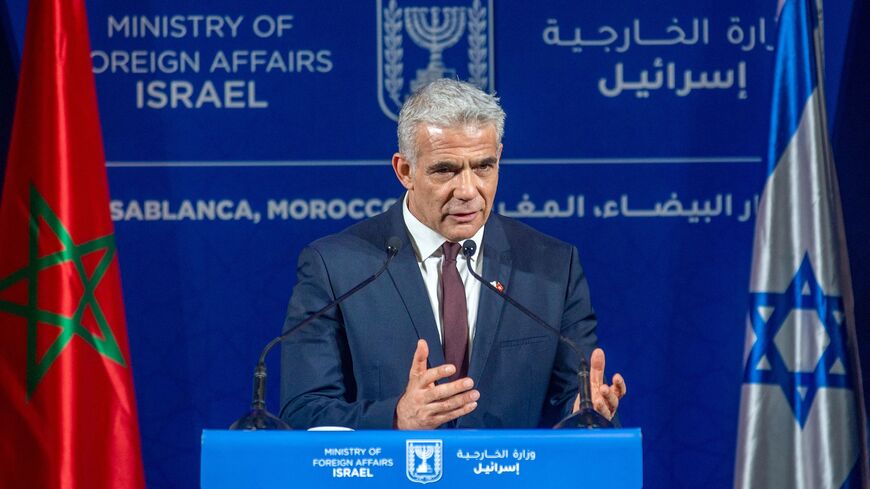 Lapid was the leader of the opposition in the fourth and final effort to oust Netanyahu, but he needed Bennett, who is to the right of Netanyahu, to close the deal, with a razor-thin margin. The only topic that seemed to unify the coalition, which also includes the Arab Raam Party, was their opposition to Netanyahu. The government therefore hangs by a thread that could unravel with just one or two defections.

The passage of the Israeli budget this month, despite the fragility of the coalition, was considered a breakthrough of sorts and testimony to Bennett’s leadership so far.

"This is, no doubt, a brand-new Bennett,"  writes Afif Abu Much. "Here is a man who speaks out against the acrimonious and divisive policies identified with the former prime minister. It was Netanyahu’s often hostile tone that won the Likud quite a few of its voters. Bennett is apparently different. He is trying to build a new voter base, made up of moderate right and center-right voters, who are uncomfortable with the divisive rhetoric that has taken over Israeli politics over the last few years."

So far the center is holding, but not without cracks, as Lapid attempts to distance himself from the spiraling coronavirus crisis.

"To the outside world, Bennett and Lapid are the picture of an idyllic relationship," writes Mazal Mualem. "Beneath the surface, however, things are hardly perfect. Upon closer inspection, it is impossible to ignore the growing cracks in this alliance. Last week, for instance, it was revealed in the press that Lapid does not participate in meetings of the coronavirus cabinet, a surprising development considering that this cabinet was formed to address a mounting national crisis."

Being foreign minister has allowed Lapid the opportunity to lead Israel’s normalization with Arab states that began under Netanyahu. In this field he can play the statesman and strategist, unburdened by the health crisis on the home front.

Last week Lapid visited Morocco in what was reported to have been an emotional and impactful visit. "Strategically, what we are creating here is a diplomatic axis of Israel, Morocco, Egypt, Jordan, Bahrain and the United Arab Emirates, which presents a pragmatic alternative to religious extremism," said Lapid as he inaugurated Israel’s liaison office in Rabat, Morocco, on Aug. 12.

"The emotional component is very much present since the beginning of the process, with Jews of Moroccan origin, both in Israel and abroad, encouraging every step of the way," writes Rina Bassist.

"The most important figure in these developing bilateral relations is King Mohammed, who reportedly sees in relations with Israel an important strategic goal, because of its economic aspects and the expected benefit to the Moroccan economy through a potential jump in commercial and business connections with Israel," writes Zaken.

Bennett takes point on US, Iran

The most important national security and diplomatic files — the United States and Iran — remain with Bennett. Bennett will visit Washington this month for a White House meeting with US President Joe Biden.

Lapid was on the road when US Director of Central Intelligence William Burns came to Israel last week to discuss Iran and other topics. Ben Caspit has the scoop this week on Burns’ meetings with Bennett and his team, writing, "Bennett presented Burns with the pillars of the new government’s policy on Iran, explaining that while Israel opposes a return to the original version of the nuclear agreement with Tehran, it would coordinate with the Biden administration and avoid going behind its back to thwart the deal."

"Bennett also explained that Israel strives to agree on a joint strategy with the United States in the event that negotiations with Iran fail, dealing with all types of Iranian aggression, including its nuclear project and spread of terrorism, destabilization of regimes in the Middle East and proliferation of rockets and missiles," Caspit continues.

Bennett, who has been a champion of Jewish settlements in the West Bank, is nonetheless seeking to smooth out potential friction with Biden on Israeli-Palestinian differences.

"According to Israeli security sources, Israel plans to make substantive, tangible goodwill gestures toward the Palestinians in order to portray Biden in a positive light as delivering the goods to the Palestinian Authority and thereby gain his trust on Iran-related issues," writes Caspit.

The appointment of Michael Herzog as Israel’s new ambassador to the United States is notable as well, as he is "the only Israeli official to have participated in all diplomatic negotiations between Israel and Arab states over the past two decades," writes Caspit.

Herzog "is not expected to spend much time mingling at Washington cocktail parties. He is not a socialite and his small talk is limited. He is serious, well versed in details, an in-depth thinker, highly discreet and trustworthy," adds Caspit. "He has yet to prove his ability to forge a stable, credible diplomatic channel with the White House, but should he succeed, this channel would undoubtedly be effective and discreet. The fact that both Israel’s prime ministers — the incumbent Naftali Bennett and his alternate Yair Lapid scheduled to succeed him in two years — have signed off on Herzog’s appointment will surely work in his favor."