On the backdrop of the fatal drone attack against the oil tanker off Oman and of growing tensions on Israel’s northern border, Prime Minister Naftali Bennett is positioning himself as Israel’s new Mr. Security. 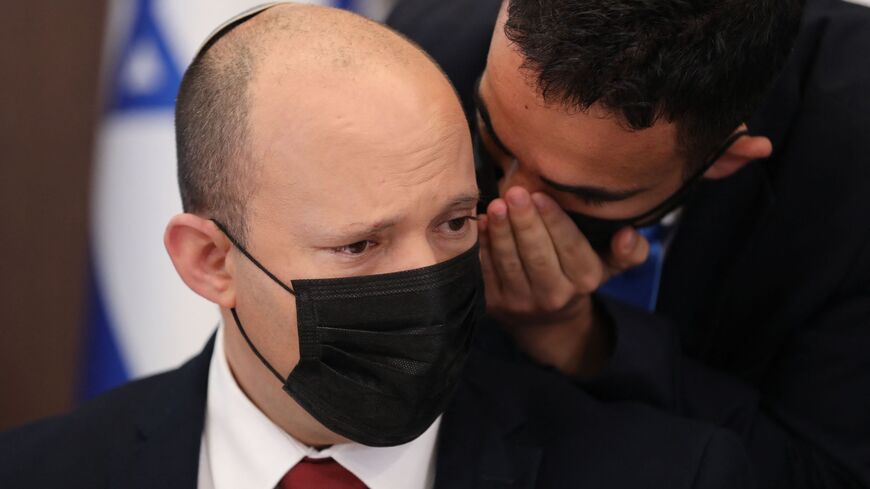 With IDF Chief of Staff Aviv Kochavi and Northern Command Chief Amir Baram on either side of him, Prime Minister Naftali Bennett toured Israel’s northern border Aug. 3. As is customary for prime ministers’ visits, he landed in a military helicopter and wore a suit despite the oppressive heat.

The visit followed a tense weekend when an Israeli-managed ship was attacked July 29 off the coast of Oman. Two crew members, one British and one Romanian, were killed as a result of a drone strike. According to a report in the New York Times, several drones crashed and hit the ship.

Although Iran and Israel have been at maritime war, this time the incident cost the lives of citizens of foreign countries friendly to Israel. Expectations of an Israeli response are high, especially since the prime minister claimed that his predecessor was not aggressive enough on security matters, most of all in facing the Iranian threat.

Bennett knows that the eyes of the world, especially regional leaders and the United States, are looking to him and his policy now. He understands that he faces a test not just before the Israeli public, but before Israel’s enemies, foremost among them Iran, Hamas and Hezbollah, who are now testing the limits of the new government he heads.

Thus, Bennett’s declaration to the media, a message that would be transmitted worldwide, was significant. He stood before the cameras and spoke gravely about Iran. He said, “They can’t sit calmly in Tehran while igniting the entire Middle East — that’s over. We are working to enlist the whole world, but when the time comes, we know how to act alone. Iran knows the price that we’ll exact when anyone threatens our security.”

His remarks also included a dig at his political rival, opposition head and former Prime Minister Benjamin Netanyahu: “Facing Iran, speeches are not enough. … We need a strong IDF and for that we need to invest many resources, and we are doing that.”

A day before his visit to the northern command, Bennett spoke at the Knesset plenum, at a debate initiated by the opposition as part of its no-confidence measure against the government.

In his speech, Bennett accused the Netanyahu government of failing to stop the Iranian race toward nuclear capabilities. "Iran is racing ahead with its nuclear program. We will deal with it. We know what to do. But to fight with every country in the world while Iran proceeds with its military program is irresponsible. But this is the legacy you have left for us."

Israel's security situation is tense and dynamic, and Bennett has no grace period. In his own words, polished speeches won’t be enough. On Aug. 4, three rockets were fired from Lebanon and landed in Israeli territory, when the north was full of summer visitors. In response, the air force carried out an attack in southern Lebanon. Analysts explained it was a proportionate response that signaled that Bennett has no intention of escalating the Lebanese front — just like his predecessor.

That being said, two months have passed since the changing of the guard in Israel, and Bennett seems to still be feeling things out. He inherited a security-diplomatic legacy that was driven by an organized worldview, for good and for bad. Netanyahu did not believe in a peace agreement with the Palestinians, forged new alliances with moderate Arab nations, opposed the nuclear deal with Iran and directed a secret intelligence war to thwart the Iranian nuclear program — a fight he defined as his life’s mission.

In the diplomatic arena, it’s not entirely clear where Bennett is headed. In the meantime, he has played along with the Democratic American administration and with the moves toward a nuclear deal with Iran — which aligns with the worldview of the foreign minister and his senior partner, Yair Lapid. It's a stark contrast with Netanyahu, who sees any agreement with the Iranians as a disaster.

This approach predicts that his relations with the Biden administration will be calmer and less contentious. On the other hand, Bennett leads a government that includes leftist parties and an Arab party that believe in a peace agreement with the Palestinians based on the partition of the land — which Bennett has ideologically opposed his entire career, even calling for annexation of the territories. Of course, he won’t be able to lead from that worldview, and some say he will go along with the left’s agenda in order to build a new electoral base for himself.

He’s already failed one test against Hamas. After attacking Netanyahu for allowing the transfer of suitcases of dollars into Gaza for Hamas and declaring that he’s working on a different solution, it seems that the Qatari money is returning to Gaza, though along a different route: bank transfer. This week Jacki Hugi, Arab affairs analyst for Army Radio, uncovered the agreement between Qatar and the Palestinian Authority to transfer money to the Gaza Strip — with Israel’s agreement. As Hugi sees it, the move damages Israel’s interests. He said, “The Palestinian Authority and the Qataris reached an agreement. Israel isn’t part of it, but it agrees to it, and doesn’t get that they did a number on it. … The dollars will return without Hamas paying a price and without Israel being able to stop the flow when it wants to.”

There’s no doubt that rhetorically, Bennett is trying to position himself as the new “Mr. Security” and to portray Netanyahu as abandoning the existential threats to Israel, proving his suitability to be prime minister. The big question is: Does Bennett have an overall security viewpoint? Does he know to navigate the complex and multi-pronged diplomatic-security landscape without any real political power? And can a prime minister who lacks political power lead an independent agenda?

Bennett has been given an opportunity to show that he’s better than his predecessor and knows how to steer Israel to safer security shores.