While coalition partners from the center and left congratulated Prime Minister Naftali Bennett on his meeting with Egyptian President Abdel Fattah al-Sisi, figures on the right are busy criticizing him over Gaza. 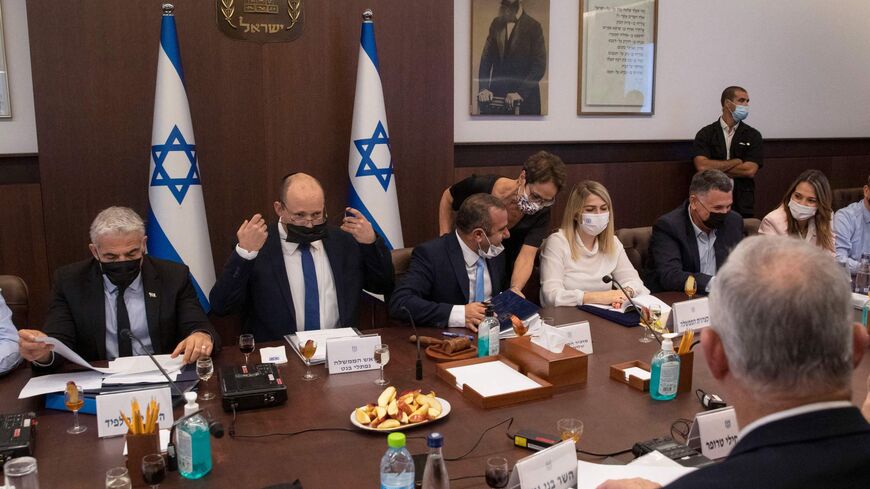 Egyptian President Abdel Fattah al-Sisi rolled out the red carpet for Israeli Prime Minister Naftali Bennett Sept. 13. The meeting, which took place at the Presidential Compound in the Sinai resort town of Sharm al-Sheikh, was warm and friendly by any standard.

While the meeting was going on, however, a stabbing took place in the crowded shopping area of Jerusalem’s Central Bus Station. Two yeshiva students were moderately injured in the attack. The perpetrator, a young Palestinian man from Hebron, was taken into custody.

News stations reporting on the successful meeting between Sisi and Bennett cut to the scene of the attack. Though the incident ended without any deaths, it fueled worry that Israel and the Palestinians are headed toward an escalation of violence.

The stabbing interfered with media attention on Bennett's state visit, during which the press was supposed to focus exclusively on Egypt’s many public gestures toward Israel. For one, the Israeli flag flew right beside the Egyptian flag. The press made a point of noting that former Prime Minister Benjamin Netanyahu never received such gestures from the Egyptians.

The meeting lasted more than three hours. Part of was an informal conversation for the two leaders to get to know each other.

Just before flying back to Israel, Bennett made a statement to the cameras: “I have just completed my first visit with the president of Egypt. It was a very important meeting and a very good one, too. First and foremost, we created the infrastructure for a deep relationship between us in the future.”

The Israeli prime minister and the Egyptian president reportedly discussed tensions in Gaza, relations with the Palestinian Authority, Iran and security cooperation between the two countries.

The meeting with Sisi, initiated by Egypt, also helped Bennett build his reputation as a statesman. It was the latest in a series of important meetings with world leaders, including King Abdullah II of Jordan and US President Joe Biden in the White House, an impressive tally for someone who only entered the prime minister’s office three months ago.

After the meeting, skeptics asked why the Egyptians were so quick to embrace Bennett so warmly and publicly.

People close Bennett said simply that Bennett had received warmer treatment from the Egyptians than his predecessor. It is, however, worth remembering that the decade-long relationship between Sisi and Netanyahu was strong. True, the Israeli flag did not fly alongside the Egyptian one when they met, but most of their meetings took place out of the public eye. During his time in office, the two countries had maintained security and intelligence cooperation of the highest order.

What did change? According to Army Radio commentator for Arab Affairs Jackie Hugi, “There are no free hugs. The Egyptians showed warmth, but that was nothing new. What was new was the effort to shine a spotlight on this warm relationship.” Hugi explained to Al-Monitor, “The Egyptians’ ultimate goal is Washington. Israel is the means to establishing a good relationship with the Biden administration, especially since the US government is unhappy with human rights violations in Egypt — and that’s putting it mildly.”

From a diplomatic perspective, there can be no doubt that this meeting was a reflection of the changes in leadership in Washington and Jerusalem over the last few months. A new government in Washington led by the Democrats and a new government in Israel that includes the left and even an Arab party allow for a change in approach to the Israeli-Palestinian conflict. Under the Netanyahu government, negotiations were deadlocked, Palestinian President Mahmoud Abbas was weakened and Hamas grew stronger in the international arena. On the other hand, the Abraham Accords also proved that Israel can sign peace agreements with Arab states without going through Ramallah.

That era is over. On Sept. 12, Foreign Minister Yair Lapid released a diplomatic plan for economic peace in the Gaza Strip, involving reconstruction and recovery in Gaza in exchange for calm. Senior Israeli officials led by Defense Minister Benny Gantz opened a direct channel of communications with Abbas in Ramallah with a series of personal meetings and phone calls. Bennett may be a right-wing prime minister and he may have described Abbas in the harshest terms in the past, but he cannot stop his leftist partners in the government from advancing their worldview.

Inevitably, the first people to congratulate Bennett on his meeting with Sisi were ministers representing the left. In contrast, right-wing members of the Bennett government, including Justice Minister Gideon Saar of the New Hope party, were conspicuously silent.

Health Minister Nitzan Horowitz of Meretz tweeted, “Finally, an official meeting, as is only appropriate. This is another important change being led by our government. We are strengthening regional ties after years of deadlock. It is in Israel’s clear interest to enter into dialogue and cooperate with our closest neighbors, chief among them the Palestinians, in the hope that with effort, this will lead to a diplomatic solution.”

Minister of Transportation Merav Michaeli took a similar approach as head of the Labor Party. She tweeted enthusiastically in Hebrew and English, “This is what change looks like. … Peace with our neighboring allies is part of the Zionist vision that the Labor Party and I believe in wholeheartedly. Strengthening these links is critical for our political-military standing in the Middle East.”

In contrast, the right attacked Bennett for breaking his promises and failing to attack Hamas, despite the rockets fired from Gaza into Israel over the last few days. They claimed that the reason he cared more about his meeting with Sisi, who has asked him to maintain calm.

One person to take advantage of this weakness was the leader of the opposition. Netanyahu broke several days of social media silence to comment while Bennett was still in Egypt. “In an effort to give more free gifts to the Palestinians and to restore the Palestinian issue to the international agenda,” the government is failing to manage the coronavirus crisis and the state is being weakened, strategically and security-wise.”

Bennett must be deeply entangled in a political crisis. Otherwise, it is hard to explain an attack by his own Yamina party’s number two, Interior Minister Ayelet Shaked, on Abbas this morning, one day after Bennett’s meeting with Sisi. Shaked, Bennett’s most stalwart ally, told the International Conference on the War on Terror at Reichman University that Bennett would not be meeting with Abbas. “When it comes to Abbas, my opinion is well known. It has not changed. Abbas pays money to terrorists who murder Jews. He sues IDF soldiers and commanders at The Hague and therefore is not a partner. The prime minister won’t meet with him and doesn’t intend to meet with him.”

Her words were politically significant. Shaked is believed to coordinate everything she says with Bennett. She helps him maintain his voter base on the right by adopting a hard line when he can’t to do so himself in his capacity as prime minister.