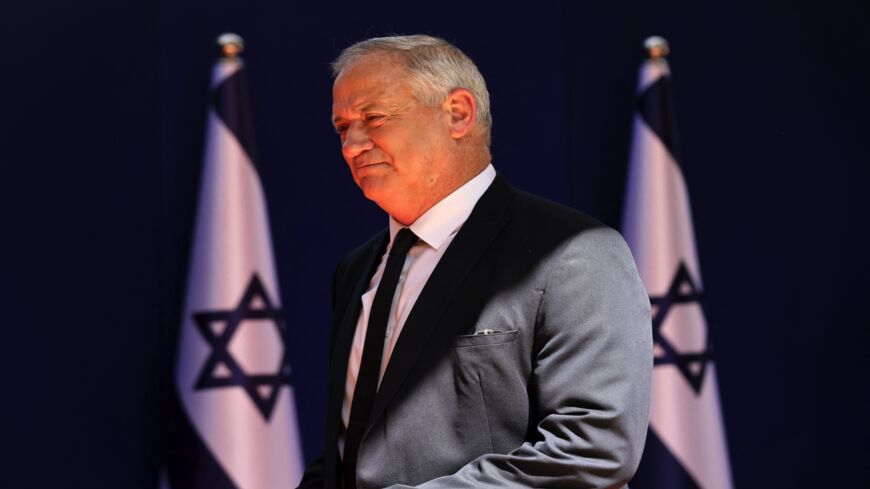 Israeli Minister of Defense Benny Gantz arrives for a photo at the president's residence during a ceremony for the new coalition government in Jerusalem, on June 14, 2021. - EMMANUEL DUNAND/AFP via Getty Images

As soon as Defense Minister Benny Gantz returned from his meeting with Palestinian President Mahmoud Abbas in Ramallah late on Aug. 29, his staff notified the country’s political reporters about that unusual event.

Over a decade had passed since a senior Israeli official met with the Palestinian leader. It was, therefore, important for Gantz to show that he was spearheading a change in policy from within the government. He could have decided, of course, that the meeting would be kept secret, but he actually wanted the public to know about it. What made the meeting so important was the fact that it was held at all. So the meeting was reported extensively and rightfully evoked great interest.

In all of Benjamin Netanyahu's governments of the past decade, the government made great efforts to weaken Abbas. Israel took pains to depict him as irrelevant. If anything, Jerusalem tried to shame him.

In 2014, for example, then Foreign Minister Avigdor Liberman said Abbas had lost all touch with reality. Then, in 2015, Education Minister Naftali Bennett — who now happens to be prime minister — warned Netanyahu not to meet with “the terrorist” Abbas. This occurred at the start of a new wave of terrorism that came to be known as the “intifada of knives.” At the time, Netanyahu said he would like to meet with Abbas to see if that could mitigate the violence.

Bennett responded sharply: “Abbas is the head of the snake of incitement; he created a new blood libel about a child that [IDF] soldiers allegedly murdered. I think it was wrong to plead with him and urge him to meet.” Bennett also said the world longs for a clear statement from Israel that Abbas is not a partner and the Israeli government opposes a Palestinian state.

Bennett, Liberman and others on the right continued with their scathing rhetoric about Abbas in the ensuing years. That is why the press was eager to ask whether the prime minister even knew about Gantz’s visit to Ramallah on Sunday. Now that he is prime minister, has Bennett taken a new approach to the Palestinian president, and if so, did this have anything to do with his successful meeting on Aug. 27 in Washington with President Joe Biden?

"There is no diplomatic process with the Palestinians, nor will there be one.” That was the response from an unnamed source close to Bennett. His associates were evidently eager to tone down the enthusiasm over the Gantz-Abbas meeting. They also noted the prime minister did approve the meeting, but it simply intended to cover all the mundane issues surrounding the defense establishment’s dealings with the Palestinian Authority (PA).

It is easy to understand why those close to the prime minister were so eager to play down the importance of this meeting. It was significant politically. Bennett still hopes to keep his base of supporters on the ideological right who rallied around him for years, not least because of his belligerent attitude toward Abbas. On the other hand, Gantz has a base of his own, and they were thrilled by his initiative in meeting Abbas.

When details about this important meeting in Ramallah began leaking the following day on Aug. 30, things suddenly got more complicated for Bennett. It was soon learned that one of the trust-building measures between Israel and the PA, approved by the defense minister at the end of the meeting, was the registration of thousands of West Bank Palestinian businesses for digital payments. This would ensure the PA receives an added 10 million shekels in taxes from those businesses. At the same time, Israel also approved a half-billion shekel loan to the PA.

Inevitably, Bennett was attacked by the right for these concessions. His detractors argued he was really paying the price for his meeting with Biden.

The Likud’s reaction was particularly sharp: “Israel is continuing to pay the price for Bennett’s photo op in the White House. Bennett failed to respond to the murder of a Border Patrol officer, and now he is transferring 500 million shekels to Abbas’ ‘Terror Authority.’ And this comes after he promised last week that he would not take action openly against Iran.”

One former partner of Bennett, chairman of the Religious Zionist Party Bezalel Smotrich, also attacked Bennett, saying Abbas poses a strategic threat to the State of Israel and adding, “After years in which the right rendered Abbas irrelevant in the political field and with great efforts slowly suffocated the Palestinian state option and took it off the table, the Bennett government brings Abbas back to the forefront as a player on the international field.”

Criticism of the visit was not limited to the opposition. Ministers from the coalition’s right-wing flank also expressed reservations and more. The chairman of the New Hope Party, Minister of Justice Gideon Saar, told an interviewer at radio station 103FM he would not have met with Abbas, “who pays the salaries of terrorists.”

In internal conversations, members of Saar’s party were even more outspoken in their opposition to the meeting. In one such conversation, Communication Minister Yoaz Hendel said, “Under no circumstances would I have met with him. He is a Holocaust denier and someone who transfers money to terrorists. A unity government should not be taking steps that favor the left, and not steps that favor the right.”

This was the background for the harsh attacks that Gantz sustained from right-wing elements within the government. He was accused of being focused on his own interests and of running a government within the government. Those same voices wondered: If the meeting was intended to focus on Israel’s security needs, why would it be followed by a statement to the press? Finally, they warned that if this government falls, it will be because of Gantz’s rash behavior.

On the other hand, there was also a wave of support for Gantz’s meeting from the center-left parties in the coalition. They all expressed their hope that it would open the way for reestablishing dialogue with the Palestinians and reengaging in the diplomatic process.

The head of the Meretz Party, Health Minister Nitzan Horowitz, congratulated Gantz for meeting with Abbas. “After a long and harmful rift with our closest neighbors, which lasted many years, it is time to renew our dialogue and cooperation with the [PA].”

The big question now, of course, is what happens next. Is Bennett really about to cross the political Rubicon like his predecessors on the right did, including prime ministers Ariel Sharon and Ehud Olmert?

Only time will tell. What is clear is that as prime minister, Bennett has turned off all the harsh rhetoric targeting Democratic administrations in the United States as well as the PA. During his meeting with President Biden, Bennett went out of his way to prove he does not intend to be a contrarian like his predecessor. He even announced he would not be waging a public campaign against the nuclear agreement with Iran.

Bennett is operating in a tough political environment. There are several centers of power in his government, meaning he is not the only person at the helm. On the other hand, if he does choose to change direction with the Palestinians in a clever, sophisticated way — one rooted in the realization that he already lost most of his right-wing supporters — it could be a major turning point for him, catapulting Bennett to the position of a genuine leader. It is now believed even the coalition’s right-wing parties, such as New Hope and Yisrael Beitenu, would not quit the coalition over this. After all, no one wants a new round of elections.