His invitation last week for Palestinian President Mahmoud Abbas to come and met him in his home, earned Defense Minister Benny Gantz a much stronger spot in Israel’s political leadership. 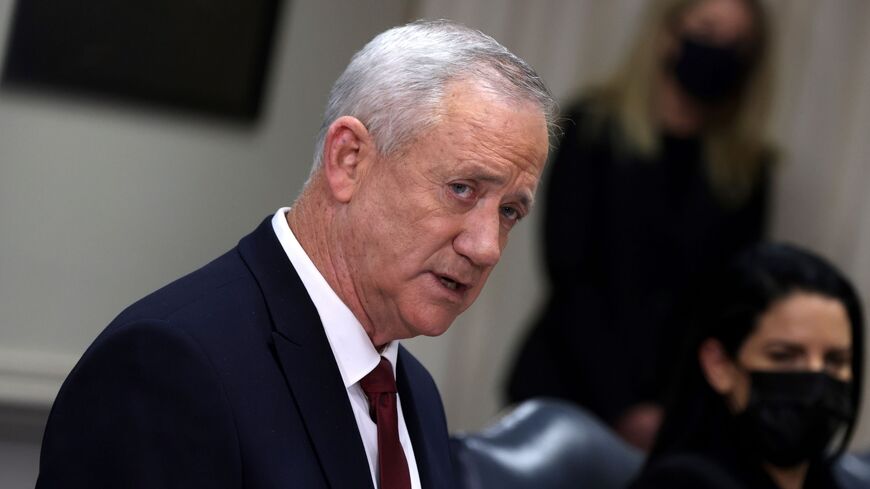 Israeli Minister of Defense Benny Gantz speaks during a meeting with U.S. Secretary of Defense Lloyd Austin at the Pentagon on Dec. 9, 2021 in Arlington, Virginia. - Alex Wong/Getty Images

Almost a week has passed since the Dec. 28 surprising meeting between Defense Minister Benny Gantz and Palestinian President Mahmoud Abbas. Still, the face-to-face session between these two men has refused to fall off Israel’s political and diplomatic agenda. While it poses a challenge to the coalition at large, the main people affected are Prime Minister Naftali Bennett and especially Foreign Minister Yair Lapid.

Just the fact that the two-and-a-half-hour meeting took place at Gantz’s home in Rosh Ha’ayin is evidence of the warm relationship he now has with Abbas. While the meeting was approved by Bennett, and Lapid knew about it, it nevertheless put them in an embarrassing situation. First and foremost, it positioned Gantz at the forefront of talks with the Palestinians, thereby transforming him into a key player in the international arena. The problem for Bennett and Lapid is that this comes at their expense.

Bennett responded that he saw no reason to prevent the meeting. Lapid went so far as to congratulate Gantz, saying that the meeting resulted in important coordination between Israel and the Palestinians.

Though all the coalition’s center-left parties joined Lapid in congratulating Gantz, ministers from the government’s right-wing flank came out publicly against him. Housing Minister Ze’ev Elkin of the New Hope party said, “From my point of view, inviting a man who insists on paying salaries to people who murdered Israelis is a mistake. Claiming that there will be a third intifada if Abbas is not hosted in Gantz’s spacious living room … well, no one actually believes that.”

As leader of a rightwing party [Yamina], the meeting was politically harmful to Bennett. Since most of his base has already abandoned him over his decision to join a coalition government with the center-left, it will probably have little impact on him electorally.

However,  it makes him look like someone who has no control over his ministers. Gantz seems to be pushing forward with his own strategy of strengthening the Palestinian Authority while weakening Hamas. Again and again, Bennett's rivals in the opposition, led by the Likud, try embarrassing him by bringing up his past harshest statements about Abbas, whom he had regularly referred to as a supporter of terrorism.

The turmoil that the meeting caused only intensified as details started to come out. According to reports, Major General Ghassan Alian, coordinator of government activities in the territories; Palestinian Minister of Civil Affairs Hussein al-Sheikh, who is responsible for civil and security coordination with Israel; and the head of Palestinian Preventive Security, Majed Faraj, were also present, though part of the meeting included only Gantz and Abbas.

To make things even more controversial, Gantz approved a series of goodwill gestures afterward. These measures include legalizing 6,000 undocumented residents of the West Bank for humanitarian reasons, and permission to legalize another 3,500 such residents of the Gaza Strip. More measures announced were the approval of a 100-million-shekel loan to the Palestinian Authority, another 600 BMC (Israel entrance cards) permits to top Palestinian businesspeople, and dozens of new VIP (fast-track Israel entrance) permits to senior Palestinian officials. Gantz and Abbas also discussed the need to approve additional long-term planning programs for the Palestinian territories.

Gantz's relationship with senior figures in the Palestinian government seems to be getting closer, with the backing of the White House. And the person most hurt by this development is Lapid.

The center-left camp appears enamored with what Gantz has been doing, and Lapid, who is scheduled to take over as prime minister in 18 months, seems increasingly irrelevant in the international arena and especially in his dealings with the White House.

Until only recently, Lapid’s strategy was to keep a low profile, avoid mistakes, and wait quietly to replace Bennett. But the situation refuses to remain static. Gantz’s moves have forced Lapid to mark his territory and to create his own agenda. After a long period of media silence, Lapid gave several interviews over the last few days, in an effort to make headlines. On Jan. 3, at a briefing for diplomatic reporters, Lapid offered a chilling prognosis of Israel’s diplomatic situation.

Among other things, the foreign minister said that an international issue this year will be the idea of Israel as an apartheid state because Palestinian pressure is actually working. According to him, the way to neutralize this assault on Israel is through the resumption of negotiations with the Palestinians.

He also said, “I think it's good that today's foreign minister and the person who will serve from August 2023 as prime minister is a man who believes in the two-state solution. But even after the rotation, the coalition's makeup will remain the same, and I will adhere to every agreement that I made with my partners."

Asked if he would meet with Abbas, he said that he does not reject the possibility, if it is justified. He added that the best Israel can hope to achieve right now with the Palestinians is cooperation in matters of security and civil affairs.

Even with all this, it is not at all clear what Lapid really wants to achieve. His messages raise the question of why he is not playing a more active role in the diplomatic arena, where Gantz is very active. Gantz seems to enjoy this position too, since it allows him to purse the agenda in which he believes. In effect, he is filling the diplomatic vacuum in a very complex and conflicted government.

At the start of a meeting of his Blue and White faction in the Knesset on Jan. 3, Gantz responded to criticism from the right-wing side of the government. "I was disappointed to hear what these ministers had to say," he said. "They speak differently behind closed doors.” He later said that he would meet again with Abbas should it prove necessary.