After distancing himself from the issue, Foreign Minister Yair Lapid has started meeting with senior Palestinian officials in a possible attempt to lay the groundwork for negotiations after he becomes prime minister. 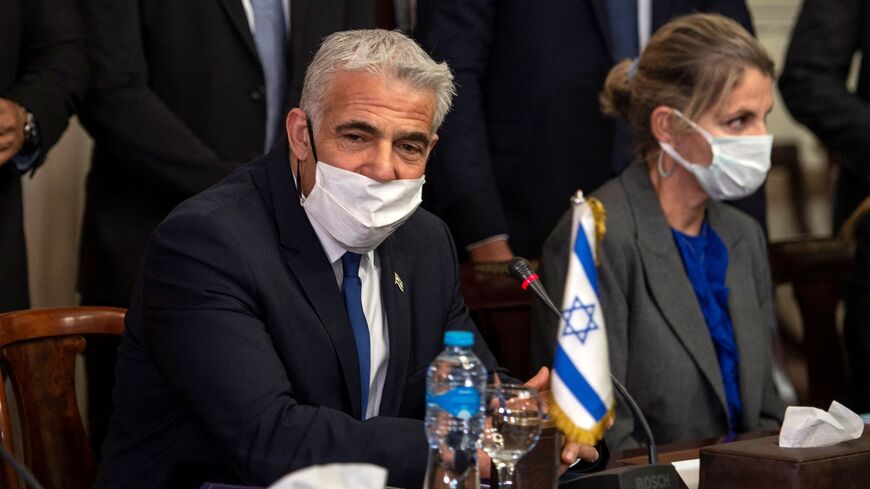 Ever since helping to form a new government last June, Foreign Minister Yair Lapid made a point of distancing himself from Palestinian issues. As he explained at the time, the government was built around consensus and included rightwing elements.

Still, it was only at a briefing for political correspondents early this month [Jan. 2] that Lapid admitted that the current government is not expected to move the diplomatic process with the Palestinians forward, even after he replaces Naftali Bennett as prime minister in August 2023. He attributed this immobility to coalition agreements. At the same time, however, he also said that he will still try to convince his coalition partners to return to the negotiating table with the Palestinians.

But that is all theory. In practice, Lapid seems to be laying the groundwork for renewing negotiations with the Palestinians anyway. Last Sunday, for instance, he hosted the Palestinian Minister for Civil Affairs Hussein Al-Sheikh at his home in Tel Aviv. The meeting took place just a few weeks after Lapid met with the head of the Palestinian General Intelligence, Majed Faraj.

Both these top Palestinian officials are thought to be very close to Palestinian leader Mahmoud Abbas. They are even mentioned as potential candidates to replace him one day. By meeting with these two men, Lapid seems to be signaling who Israel prefers to take over from Abbas when he steps down.

What did Lapid and Al-Sheikh discuss? In an interview with Israel’s Walla News, the Palestinian minister said that that the meeting “opened the door” for increased contacts between Israel and the Palestinians. “We want this door to remain open, so that we can move ahead in the future to a renewal of negotiations,” he said. He also mentioned that during their discussions, he relayed a message from Abbas to Lapid, in which the Palestinian leader expressed his belief in a diplomatic solution with Israel.

Lapid's office would not discuss the meeting. Nevertheless, on Jan. 24 Lapid told Channel 13 News, “I will not hide the fact that a diplomatic process is necessary. At the same time, we must recognize that this government was built on the principle of maintaining the status quo. I will continue to try to convince the members of the coalition to begin these negotiations. [On the other hand,] I would never do anything behind their backs, and I will not do anything against their will, because this is a government built on consensus, and which works well together.”

Lapid is taking a two-pronged approach. He is aware of how sensitive the renewal of negotiations with the Palestinians can be, especially with his coalition partners on the right. He informs Bennett of every meeting he has and avoids meeting with Abbas himself. At the same time, however, he is showing increasing independence and speaking on behalf of his own position, or in other words, on behalf of negotiations between Israel and the Palestinians. By meeting with two senior Palestinian officials considered close to the Palestinian leader, he is putting the groundwork in place for what may lie ahead, when Lapid enters the Prime Minister’s Office.

But why has he decided to do this now? It is necessary to go back to Defense Minister Benny Gantz's meeting with Abbas at his home last December, their second official meeting. According to briefings from both sides, they discussed security issues and effort to restore calm and prevent an escalation of violence in the West Bank. This is, of course, only a partial account. Security coordination is not something that would require a face-to-face meeting. Apparently, Gantz's real goal was to fill the diplomatic vacuum left by a government built around consensus. He was pulling the government toward the diplomatic agenda of his center-left electorate.

That is problematic for Lapid. It ends up depicting him as a secondary player, when both he and Gantz are part of the same camp that supports renewed negotiations with the Palestinians. If the foreign minister ignored these developments, it would leave the arena to Gantz.

Ever since he founded the Yesh Atid party a decade ago, Lapid has learned to take advantage of opportunities as they present themselves. He proved this when he agreed to let Bennett serve first as prime minister, even though his own party held three times as many seats as Bennett’s. Lapid realized that with most Israelis situated on the right of the political spectrum, this was the only way he could even approach the coveted Prime Minister’s Office. To do this, he had to put aside the diplomatic agenda of his camp regarding the renewal of peace talks.

Now that the coalition is an established fact, and he is almost certain to enter the Prime Minister’s Office in the not-too-distant future, he can show greater confidence. He is also a more sophisticated player. He has not met face-to-face with Abbas, so as not to undermine the stability of his alliance with Bennett and the parties on the right. In actual fact, however, his meetings with those people closest to the Palestinian leader are a hint of what lies ahead. They offer some indication of what Lapid hopes to achieve as prime minister.

As soon as he takes over the office, Lapid will be able to expedite diplomatic activity and set the agenda. Even if that leads to the collapse of his government, he will still have established himself as the sole leader of the center-left camp. He may even be able to win over voters who support Gantz and other leftwing parties in the next election.