Foreign Minister Yair Lapid is reshaping his election-campaign strategy in response to infighting on the right, and a possible showdown with former Prime Minister Benjamin Netanyahu. 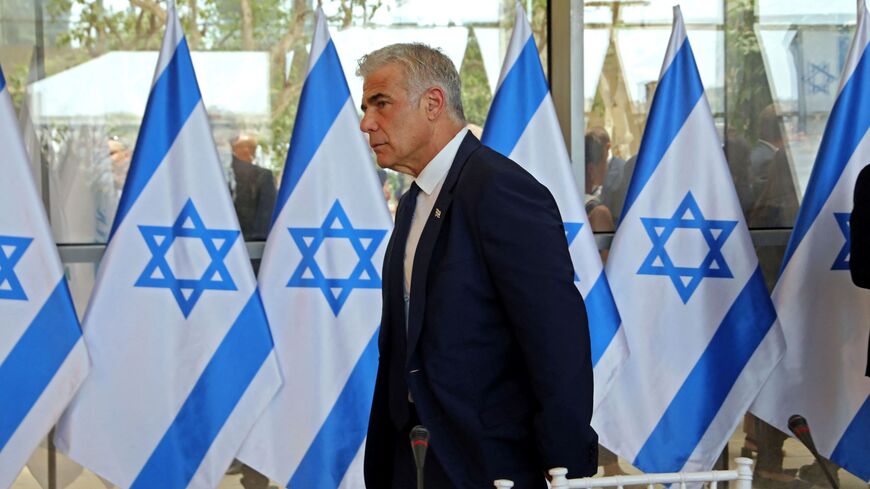 It is very possible that Israeli Foreign Minister Yair Lapid might enter the Prime Minister’s Office in just a few weeks. According to the rotation agreement between him and Prime Minister Naftali Bennett, if one of the right-wing parties causes the coalition to fall apart before the official transfer of power in August 2023, Lapid immediately becomes prime minister.

The demise of the coalition has seemed increasingly likely over the last week. The government cannot pass legislation, it is losing votes in the Knesset, and its members are violating coalition discipline. To make matters worse, members of Bennett’s own Yamina party are reportedly conducting covert and even direct negotiations with the Likud about joining them at some point.

If just one of these renegade Knesset members quits the coalition, the government is unlikely to survive a no-confidence vote. If this happens, Lapid would take over from Bennett and serve as prime minister during the election campaign.

In that case, Lapid will go head-to-head against former Prime Minister Benjamin Netanyahu from the position of prime minister. Lapid will lead the center-left bloc, while Netanyahu will lead the rightwing-ultra-Orthodox bloc, with each trying to win the 61 seats needed to form a coalition.

That is why Lapid is targeting all the Arab parties as partners in his efforts, and not just coalition partner Ra’am, led by the pragmatic Mansour Abbas. Lapid even sees the opposition Arab Joint List as a potential partner. In a television interview this week, Lapid said, “There hasn’t been an Arab party in the government for the past 74 years. We’re in the process of changing that now.”

Lapid thus completes a personal transformation from when he first entered politics ten years ago. After the 2013 election, Lapid was head of the second largest party in the country, right after the Likud. At the time, he consciously distanced himself from left-wing parties like Meretz and rejected the very possibility of cooperating with the Arab parties to block Netanyahu from forming a government.

At the time, Lapid was attempting to position himself in the center of the political divide, albeit with rightwing tendencies. It was part of his overall strategy to get elected prime minister by winning over the soft right. At the time, his efforts failed. The Likud circled the wagons in support of Netanyahu, while Lapid got sucked into the vacuum that was the center-left leadership to emerge as leader of that bloc.

Now, with a new election likely in the not-too-distant future, Lapid is the unchallenged leader of the Israeli center-left. There are no attractive candidates like Defense Minister Benny Gantz who can wage a real challenge to Lapid.

Furthermore, over the last few days, there have been assessments that another former chief of staff, Gadi Eizenkot, is in talks with Lapid to run alongside him. It would be a major achievement for Lapid to get Eizenkot as his candidate for minister of defense. Eizenkot is a highly regarded general of Mizrahi origins, and his positions on key issues are moderate. Lapid is not considered an authority on security issues, so the support of a highly regarded former chief of staff would be invaluable to appeal to the moderate right.

Lapid's recent activity also points in that direction. In a moving post to Facebook, he described a late-night vote in the Knesset on the People with Disabilities Act, submitted by his own party’s Minister of Welfare Meir Cohen. As the father of an autistic child, Lapid identifies closely with legislation for people with disabilities. Cohen’s legislation passed with the support of Knesset members from the opposition, including the ultra-Orthodox parties and Knesset Member Yoav Kisch of the Likud. Kisch was the father of a special-needs child, who passed away a few years ago at 13.

Lapid's description of a transcendent moment in a Knesset better known for acrimonious bickering said that the legislation “is bigger than us. It is more important than the political insanity. The opposition acted responsibly, heart and soul. It is important for me that everyone knows this, and for me to extend my heartfelt thanks to them.”

While expressing his emotions, the post also espoused a new tone toward the ultra-Orthodox. Lapid represents a bloc of voters that, for the most part, has a deep aversion to the ultra-Orthodox parties and the hardcore Likud voters who support Netanyahu despite his ongoing criminal trial.

Thus, over the years, Lapid had frequently resorted to the rhetoric of identity politics, with messages like, “They stole the country from us. We’re here to take it back. Give us back our country, you scoundrels!” But who does he mean by “we”? He is referring to the ultra-Orthodox parties and the Likud under Netanyahu, which ruled the country for 12 years.

These kinds of messages rally well-to-do Ashkenazi voters, or what pollsters often refer to as the “White tribe,” but they cause supporters of Netanyahu and the ultra-Orthodox to unite even more around Netanyahu, whom they consider the leader of the “second Israel” in an alliance of the underprivileged.

It is not at all certain that Lapid would prove attractive to Likud voters, as long as he makes alliances with the Arab parties – certainly not with Netanyahu getting stronger by the day. On the other hand, Lapid has good cause to believe that if he can win a single seat from the soft right, he will be closer to winning 61 seats.

As abovementioned, no one knows exactly when the next election will take place, but it is obvious to everyone that it is right around the corner. The election will be a contest between Netanyahu and Lapid, each heading a distinct bloc of parties.

Lapid’s bloc will include the Yisrael Beitenu party, headed by Finance Minister Avigdor Liberman, who has moved to the liberal side of the spectrum and is campaigning against the ultra-Orthodox. This is important, because it provides Lapid with the flexibility to be a moderating force. He no longer has to attack the ultra-Orthodox, because he knows that Liberman will do the job for him and bring in those voters who despise that community – the “anti-ultra-Orthodox bloc.”

Lapid is now facing the biggest test of his career. He leads a huge bloc and heads the second-largest party in the country. And, like his opponent Netanyahu, he is also an outstanding campaigner.