Defense Minister Benny Gantz' statements and actions of the past few weeks indicate that he has matured politically and is still hoping to be premier one day. 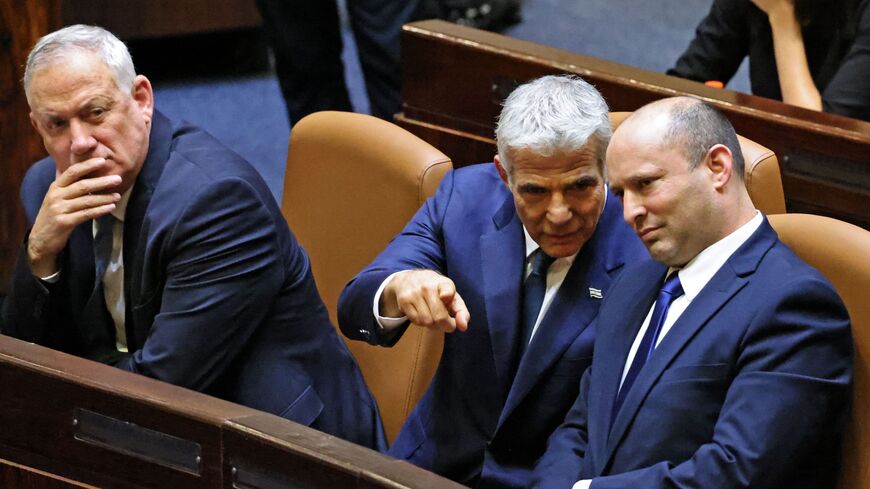 (R to L) Israel's Prime Minister Naftali Bennett and his alternate, Foreign Minister Yair Lapid, converse while Defense Minister Benny Gantz looks on in the Knesset chamber after a special session to vote on a new government at the Knesset in Jerusalem, on June 13, 2021. - EMMANUEL DUNAND/AFP via Getty Images

In an interview published Sept. 14, Defense Minister Benny Gantz told Foreign Policy magazine that Israel would be willing to accept a US-negotiated nuclear deal with Iran. The statement signaled a clear shift away from the doctrine espoused by former Prime Minister Benjamin Netanyahu that formed the basis of Israeli policy for the last 12 years. The interview also signaled that the country’s defense policy is now being shaped by Gantz.

Asked about efforts by Washington to get back to a deal with Tehran, Gantz said, “The current US approach of putting the Iran nuclear program back in a box, I’d accept that.” He added that Israel would want to see a “viable US-led plan B” that includes broad economic pressure on Iran in case the talks fail.

Still, Gantz expressed reservations about the current diplomatic efforts to hamstring Iran's nuclear program. He stressed that the backup plan should include diplomatic and economic pressure on Tehran by the United States, Europe, Russia and China: “We have to connect China in this, too; Asia has to play a role.” He also said that the Israel Defense Forces was preparing a military option to block Iran’s nuclear program. “If push comes to shove, we’ll get there. … We’re not America, but we have our capabilities.”

Emerging reports indicate that Iran has made significant progress in its efforts to obtain nuclear capabilities, from which Gantz himself said in the interview that Iran is just two or three months away. With the United States deeply involved in major diplomatic efforts to reach a new and improved nuclear agreement, Gantz’ statements are dramatic.

Judging by past statements by Israeli ministers on the issue, we can assume that Gantz would not have said such things as part of a Netanyahu government. As prime minister, Netanyahu singlehandedly managed the diplomatic struggle against Iran’s nuclear capabilities. He pressured US President Donald Trump to withdraw from what he called the “disastrous” agreement with Iran negotiated under President Barack Obama.

The fact that not a single minister, including Prime Minister Naftali Bennett and Foreign Minister Yair Lapid, disavowed Gantz’ statement or presented another approach indicates that Gantz has become the current government’s authority on security matters and has been able to create his own agenda.

When it was first established, the Blue and White Party, headed by Gantz, won a remarkable 35 Knesset seats in April 2019. Ahead of the March 2021 elections, Gantz crashed in the polls for joining Netanyahu’s latest coalition, despite all his promises to voters. Pollsters questioned whether the party would pass the electoral threshold. Gantz was considered then to be a political relic. Leaders of the center-left camp, including Yesh Atid chair Lapid and Labor chair Merav Michaeli, urged Gantz to withdraw from the race. They argued that he was unlikely to pass the electoral threshold and would therefore end up wasting votes for their bloc, which was fighting to replace Netanyahu.

But Gantz refused to concede. The former chief of staff fought back with a political campaign that at first seemed doomed to failure, but ended up with an impressive eight seats, two more than the current prime minister’s party. The win gave Gantz considerable strength in the new government, which was entirely dependent on its individual constituents.

Gantz was especially critical to forming that government, because the Likud still considered him a likable partner despite his rift with Netanyahu. Netanyahu himself made Gantz offers to join him and was even willing to give Gantz the first turn in a rotation agreement for prime minister. But Gantz turned down the offer and chose to be defense minister in a government headed by Bennett and Lapid, neither of whom he apparently holds in particularly high regard. Even now, three months after the new government was formed, he has made little effort to conceal his bitterness over how things turned out.

Almost three years after he first entered the political fray, Gantz is proving that he has learned how to maneuver through Israel’s political minefield. He is aware of his strength in such an ideologically polarized coalition and of his seniority on security affairs, especially in a new and inexperienced cabinet.

His independent approach to policy was evident in his Aug. 29 meeting with Palestinian President Mahmoud Abbas in Ramallah. It was the first meeting Abbas had with a top-ranking Israeli official in over a decade. For years, Bennett had attacked Abbas from the right, describing him as a terrorist, but now approved the meeting. People close to Bennett accused Gantz of promoting the meeting for political gains and noted that the prime minister still refuses to meet with Abbas, but Gantz seemed unperturbed. Over the next few days, his office released more reports about the tangible results of the unusual meeting.

Just like in the Iranian affair, Gantz is taking an independent course in dealing with the Palestinian issue. His center-left approach is very different from that of Netanyahu, whose policies arguably strengthened Hamas while weakening Abbas to the point of irrelevance.

While ministers on the right, such as New Hope chair and Justice Minister Gideon Saar, expressed reservations about Gantz meeting with Abbas, the bottom line is that no one in the current government has attempted to undermine Gantz’ direct line with Ramallah, which has allowed him to find a solution to the transfer of Qatari aid money.

It looks as though the new government has been good for Gantz. He has learned how to negotiate the political terrain to his benefit and to advance his own agenda. Fully aware that without him, there would be no government, he has already signaled that he does not intend to give up his position as defense minister. In recent interviews, he said that he has not given up on his dream of one day being prime minister.

It was a politically sophisticated statement and posed a threat to the heads of the other parties in the coalition by insinuating that at any given moment, he could bring the government down, join forces with Netanyahu and become prime minister overnight. While the conventional wisdom is that he would not take such a risk, Gantz wants everyone to know that he has other options.

Gantz has become a sophisticated politician, devoid of sentiment, who is active across the entire playing field of Israeli politics. Unlike other members of the government, he does not loathe Netanyahu. He maintains open channels with the Likud, the ultra-Orthodox and the Arabs, and takes into consideration that in a crazy political world where someone with just six seats can become prime minister, he could end up replacing him under the right circumstances.