With his rightwing base on the one side, the Biden administration and his coalition partners on the other, Prime Minister Naftali Bennett finds himself caught between a rock and a hard place on bettering the lives of Palestinians. 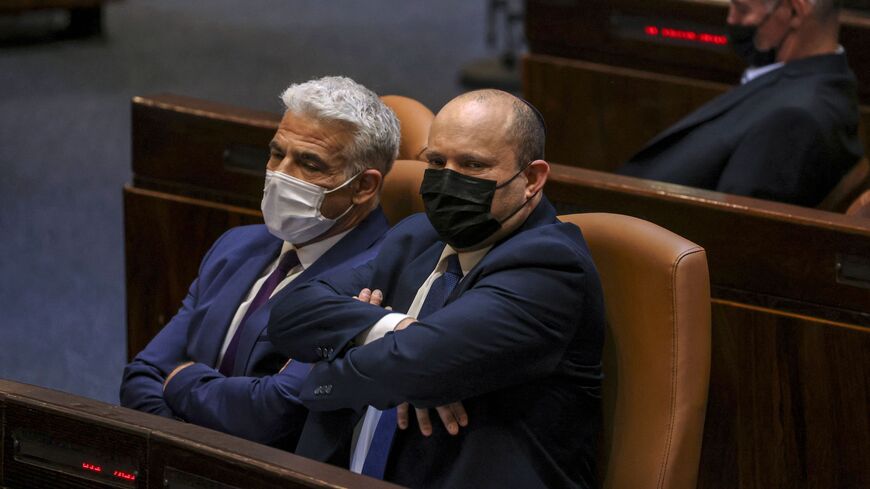 Israeli Prime Minister Naftali Bennett is caught between a rock and a hard place. He promised US President Joe Biden at their Aug. 27 White House meeting to take steps to improve the lives and economic opportunities of Palestinians. But his predecessor Benjamin Netanyahu is constantly breathing down his neck, seeking every opportunity to portray him as a leftist. He is hemmed in by Biden and the left-leaning partners in his governing coalition — the Labor, Meretz and Ra’am parties — and on the other side by Netanyahu, his followers and the pledges he himself made in the past as a far-right politician.

Defense Minister Benny Gantz came to the rescue Aug. 29. Just hours after Bennett’s return from Washington, Gantz met with Palestinian President Mahmoud Abbas in Ramallah. This first top-level meeting between the sides in over a decade reflected the policy Bennett had just presented at the White House: Goodwill gestures toward the Palestinians and economic moves to bolster the Palestinian Authority and distinguish it from the hard-line Hamas rulers in Gaza.

But reality is far more complex than the promises made thousands of miles away. Bennett's associates were furious at Gantz, accusing him of calling undo attention to the meeting and trying to create the impression that in addition to economic and security issues, he and Abbas also discussed diplomatic and political matters. After all, Bennett promised the right-wing political base (many of them Netanyahu supporters) that there would not be any peace negotiations with the Palestinians on his watch. Gantz, on the other hand, must have felt betrayed and furious that Bennett — who gave his approval for the meeting with Abbas — failed to back him publicly.

The trust between Bennett and Gantz that was frail to begin with was thus further eroded. This crisis shook the fragile coalition for two days until it was overtaken by the hullabaloo of Knesset approval for the budget. Calm was restored after the Sept. 2 budget vote, but the rifle loaded in the first act could still be fired down the line.

Gantz’ main goal was to establish the mechanism by which Qatar transfers aid to the Gaza Strip to ensure the money reaches needy Palestinian recipients rather than Hamas, as it did in the past when Qatar brought in its notorious suitcases bulging with cash. In a speech and television interview given to Channel 12, just days after stepping down in June, former Mossad chief Yossi Cohen said he had erred in urging Qatar to keep helping Gaza because the money had mostly helped the Hamas buildup. His words so angered the Qataris that they cut ties with the agency and coordination over future aid.

Gantz stepped in to conduct contacts with the Qataris, the United Nations and the Americans on an arrangement that would provide aid to the needy through refillable cards. Bennett monitored the developments and gave his blessing. Gantz met with Abbas to plug one remaining loophole in the transfer mechanism: $6 million for the salaries of Hamas employees in Gaza. He wanted the money funneled through Palestinian banks but Abbas was a holdout on the arrangement. He is no sucker — if everyone wants his help, he must have thought to himself, let them pay.

In hopes of getting Abbas on board with the plan, Gantz brought with him an impressive package of goodies, including a 500 million-shekel ($155 million) loan to be repaid next year, building permits and other benefits. News of the visit and the incentives clearly sent Bennett’s stress level sky high.

However, there is not much Bennett can do about it. He needs the support of all his coalition members. Until the budget gains final Knesset approval — the Sept. 2 vote was only a first reading and it must pass two more to become law — his government hangs by a thread. A clash with Gaza prompted by the Qatari aid delay at this stage could jostle the government’s rickety foundations, especially the support of its Arab partner, Ra’am.

Hamas is milking Bennett’s bind for all its worth. Two weeks ago, an Israeli sniper was shot by a Hamas member during Aug. 21 rioting along the border fence with Gaza. The political right took advantage of his subsequent death to launch a vicious attack on Bennett’s government, claiming the soldier had been abandoned to his fate, that the army had tied his hands in limiting authorization to fire at Gaza rioters, just to ensure the survival of the government.

When Gantz showed up at PA headquarters with bulging pockets just days after the shooting, Bennett was caught in the crossfire and went on the defensive. His people think Gantz overplayed his hand with the high-profile visit. Gantz’ associates say Bennett is ungrateful after the defense minister went to Ramallah at Bennett’s behest to pacify Hamas by arranging the aid transfer and promote a long-term cease-fire with the organization.

Spoiler alert: The Bennett-Gantz tensions will sort themselves out. They will not bring down the government. The question is who will resolve the tension with Hamas and how.

The bizarre Ramallah visit saga is typical of the Middle Eastern paradox, especially the Israeli-Palestinian one. Senior Israeli officials have boasted that their colleagues from Arab countries were eager to have their photos taken with Israelis, a stark contrast to their past insistence on secrecy over such meetings.

The Gantz-Abbas meeting did not yield a photo op, although the defense minister’s office has photos and videos of the event. This time, the Israelis were the ones who sought to downplay the event — both to avoid angering the right-wing base threatening the Bennett government and to save Abbas himself embarrassment.

“There’s no need for photos and talking,” a senior official in Bennett’s circle told Al-Monitor on condition of anonymity. “Show me one photo of a senior American official with Abbas in recent years. There’s no such thing. We have relations with the PA and security coordination but there’s no reason to boast of it and rush out to tell everyone. There’s no reason for Bennett to meet with Abbas himself, that won’t happen, but he does have good reason to continue cooperation with the PA and to try to improve the lives of Palestinians on the ground. That is precisely what he is doing.”