Domestic politics are complicating any moves toward better ties, and Hamas is seeking an advantage by stoking resistance. 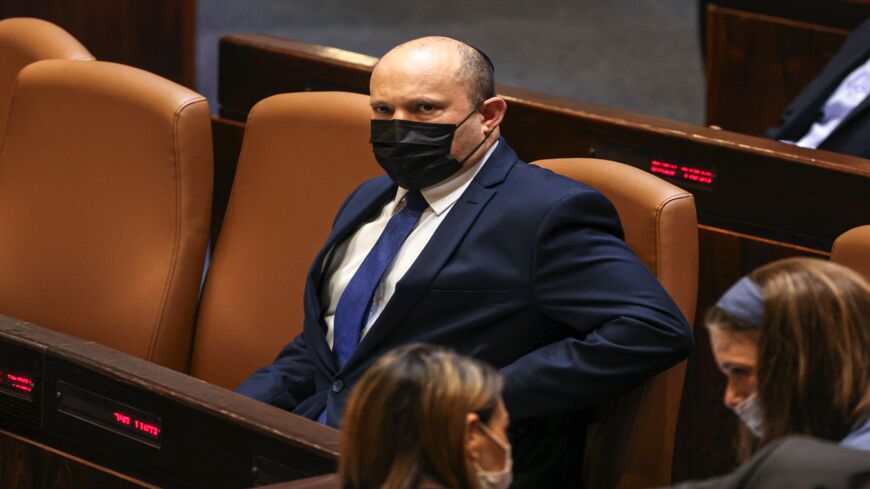 Israeli Prime Minister Naftali Bennett looks on during a plenum session on the state budget on Sept. 2, 2021. - AHMAD GHARABLI/AFP via Getty Images

Israeli Prime Minister Naftali Bennett followed through on his promise to US President Joe Biden at their White House meeting on Aug. 27 to improve conditions for the Palestinians and de-escalate political tensions. These goodwill gestures, including $155 million in aid to the Palestinian Authority (PA), have so far fallen flat. What are considered compromised or halfway measures have given no political bounces for Bennett and PA President Mahmoud Abbas, who are boxed in by domestic politics.

Israel announced a series of what it called "civil steps" to ease conditions for Palestinians, including expanding the fishing zone near Gaza; permitting an additional 5,000 Palestinian merchants to operate in Israel; and allowing more construction materials and an additional 1.3 billion gallons of water into Gaza, as Rina Bassist reports.

Most dramatically — and controversially, it turns out — Bennett dispatched Israeli Defense Minister Benny Gantz to the West Bank town of Ramallah on Aug. 29, just two days after the prime minister's meeting with US President Joe Biden, for the first high-level Israeli meeting with Abbas in years.

Gantz’s top priority was to rejigger the arrangement by which the Gulf state of Qatar channels funds to Gaza. At the moment, the money ends up mainly in the hands of Hamas, the Islamic Resistance Movement that governs Gaza. This was a challenge of some complexity since it required coordinating with a range of players, including the United States, the United Nations, Qatar, Hamas and the PA. Things have been tough in Gaza since May when Israel and Hamas fought a short, intense war. But Israel does not want its enemy Hamas reaping the windfall. And Abbas, whose popularity has been sagging, has no interest in helping out either Bennett or Hamas.

Gantz’s mission got more complicated, as Ben Caspit reports here, after Qatar cut off coordination with Israel following a speech and television interview by former Mossad Chief Yossi Cohen in which he said he had "erred in urging Qatar to keep helping Gaza because the money had mostly helped the Hamas buildup."

Gantz got Abbas to sign off on a $6 million transfer mechanism for Hamas salaries through Palestinian banks, which required coordination with Abbas, and delivered the PA a loan of $155 million to help the economy.

The endgame of all this for Bennett was getting hammered from the right for appeasing Hamas, especially following the killing of an Israeli soldier during rioting along the Gaza-Israel border on Aug. 21.

To top off the run of problems for Bennett, the Biden administration announced it would reopen the US consulate in Jerusalem, where its embassy now also sits, as a gesture to the Palestinians who consider Jerusalem their capital, too. Even Bennett’s coalition partner, center-left Foreign Minister Yair Lapid, called it a "bad idea."

Bennett, a right-winger himself, has tried to balance competing interests of left and right by promising he will neither recognize a Palestinian state nor permit further annexation of West Bank settlements.

Likud opposition leader and former Prime Minister Benjamin Netanyahu spends every waking hour planning to pick off the one or two coalition members that would bring down the government and, he hopes, offer him a pathway back to power. Mazal Mualem suggests, however, that a shared interest in preventing both a Netanyahu return and a fifth round of elections may allow the center to hold.

Securing a $155 million loan from Israel appears to have done nothing for the popularity and waning legitimacy of Abbas and his government.

Palestinians instead view Abbas and the PA as “indirectly complicit with perpetuating the status quo of a permanent occupation,” as Daoud Kuttab explains.

The PA’s popularity is sinking in the West Bank following Abbas’ postponement of elections in the spring and the security services’ killing of PA critic Nizar Banat in June.

Two-thirds of respondents to a recent poll in the West Bank supported revoking the Oslo Accords, the 1993 agreements between Israel and the PLO in which Israel recognized the PLO as a negotiating partner and established the PA for limited self-governance in parts of the West Bank and Gaza. And 61% opposed security coordination between the PA and Israel, as Ahmad Melhem reports.

Perhaps the most sure-fire political win for Abbas will come from Washington’s decision to reopen the consulate in Jerusalem.

"The simple act of changing a sign on a building will have a lot of meaning to Palestinians and to the trajectory of the conflict," writes Kuttab. "In addition, it will make it clear what can and what can’t be done in relation to the Palestinian-Israeli conflict and the attachment of the Palestinian people to their holy city."

In Gaza, Hamas gives Israel neither credit nor quarter, despite the goodwill measures, and has resumed border demonstrations and the use of incendiary balloons, which drift into Israel and start fires.

Clashes on the Israel-Gaza border have resulted in at least one death and 45 gunfire injuries, including a 13-year-old boy with a gunshot wound to the head, according to Palestinian health officials.

"The joint operation room is operating based on a consensus among the leaders of the military and political factions in Gaza," writes a correspondent in Gaza, speaking with Hamas and other officials and resistance figures. "The latter had agreed to use all popular means to pressure Israel, including holding afternoon protests at the border, holding night confusion protests and launching incendiary balloons toward Israel."

"The Palestinian factions rejected the Israeli measures and formed groups known as "night confusion units" to disturb settlers on the Gaza border," writes Mai Abu Hasaneen. "On Aug. 29, young men from the night confusion units set fire to tires, detonated sound bombs near the Maleka Camp area in eastern Gaza and directed laser beams at the Israeli military watchtowers across the border to pressure Israel to end its siege on Gaza."