Israeli security forces have redeemed their image after successfully capturing the six Palestinian prisoners who escaped last week from a high-security jail. 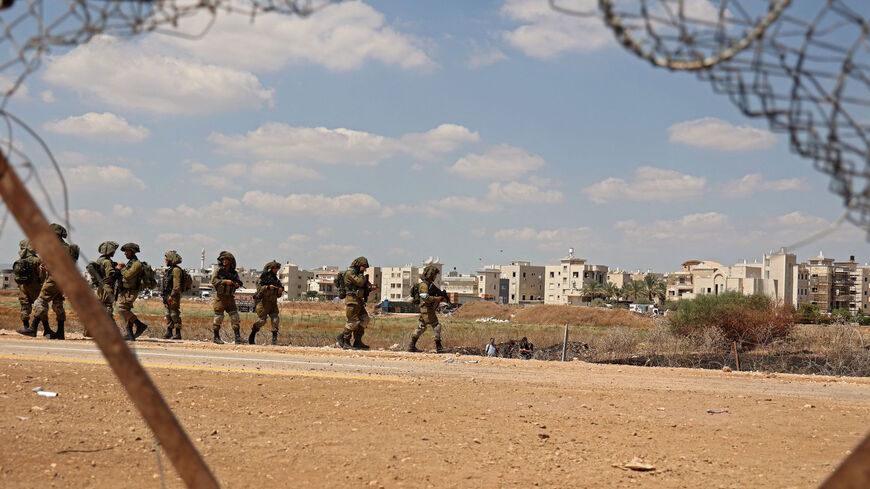 Israeli soldiers patrol near a hole in a security fence in the West Bank town of Jenin, on Sept. 6, 2021, following the breakout of six Palestinians from an Israeli prison. - JAAFAR ASHTIYEH/AFP via Getty Images

If the first half of this drama seemed like Prime Minister Naftali Bennett’s worst nightmare, its second half and denouement was a dream come true for the premier and his fragile coalition government. Following the fiasco of the Sept. 6 escape by six Palestinian inmates from Israel’s highest security prison Gilboa that threatened the shaky foundations of Bennett’s coalition, Israel's security forces managed to restore their prestige with an impressive two-week manhunt that culminated on Sept. 18 with the successful capture of the final two escapees. All six, among them the former Fatah leader in the Jenin refugee camp Zakaria Zubeidi had been caught — two on Sept. 10, two on Sept. 11 and the final two on Sept. 18 — without a drop of blood being spilled on either side. Bennett’s sigh of relief seemed to echo from Jerusalem all the way to Ramallah.

In the days following the daring jailbreak, some in Israel worried that Zubeidi would become a Che Guevara-style popular hero and ignite Palestinian violence in the West Bank and Gaza. There was concern that the escapees would manage to reach Lebanon and hook up with Hezbollah or that they would cross into Jordan and plot to destabilize King Abdullah’s rule. Speculation about their capture also did not bode well. They were supposedly armed and willing to fight Israel’s soldiers, security service and police counter-terrorism units to the death. Such an event, experts opined, could turn into a bloodbath and a third intifada and turn the escapees into martyrs whose heroic deaths would set the region on fire.

Their capture was far from a foregone conclusion. “Such an event is not a reality show,” a senior Israeli security official told Al-Monitor on condition of anonymity. “This was a detailed and meticulous operation involving many participants, with intelligence pouring in from the Shin Bet and [military intelligence unit] 8200" and hard work by military and police counter-terrorism teams. “We considered all the scenarios. We were prepared for much harder options, including entering the Jenin refugee camp, considered the most dangerous and toughest place in the West Bank. Happily for us, it ended in the best possible manner, but we must not rest on our laurels. Next time it could end far worse.”

According to indications from the Shin Bet, one of the two last escapees had realized Israel’s worst scenario by reaching the Jenin refugee camp, which is run by hundreds of armed Palestinians who do not answer to anyone, a place that even Palestinian Authority security forces refuse to enter. The escape and rumors bolstered the camp’s image as a symbol and hub of Palestinian struggle. Last month, armed militants in the camp opened fire at PA security forces and local gangs brazenly declared that they were ready and waiting for the Israel Defense Forces, daring them enter the camp and meet their death.

But then something strange happened. Along with the intelligence indicating that the second escapee had also reached the camp, it transpired that the two had moved out of the crowded camp and into a safehouse about a kilometer away in the eastern part of Jenin. “That still doesn’t mean we can expect a picnic,” a senior intelligence source told Al-Monitor a few days ago on condition of anonymity. “But it’s not the refugee camp.” Their reason for moving away from the relative safety of the camp is still unclear, but the security source suggested that “perhaps they decided to stay alive.”

There is little doubt that the pair barricading themselves in the refugee camp would have resulted in a firefight, probably with casualties on both sides and the escapees very likely ending up dead. Such an event, as many speculated, would have had explosive repercussions. Instead, the operation was over within less than an hour. The tactical police units surrounded the safehouse, backed by the Shin Bet operations unit, IDF troops and aerial cover in an operation known in IDF jargon as “pressure cooker” — isolating a structure to ensure that no one can escape the cordon.

Just minutes after the troops used megaphones to call on the escapees to come out, the two emerged with their hands up. Less than an hour later, all vestiges of Israel’s armed presence in Jenin had disappeared. The armed Jenin camp residents, who had boasted for weeks that they were ready to take on the IDF, barely sought to engage the Israelis and the whole event that threatened to prompt widespread violence was over.

What started out as a nightmare had a relatively happy ending and showed yet again that the West Bank is perhaps the most heavily monitored area in the world. With this unprecedented success, Israel’s intelligence forces proved their complete control of the area. In Gaza, Israel's ability to recruit human intelligence sources is limited compared to in the West Bank.

The successful outcome, however, does not mean everything else will come up roses. The Gaza cauldron continues to bubble and threaten to spill over. While the inmates’ escape did not spark an all-out fire, nor did it douse the potential for one. A clash with Gaza seems inevitable considering the 10-million-shekel ($3.1 million) financial aid from Qatar that Israel insists on withholding from Hamas each month. The sum is about a third of the total monthly Qatari aid for needy residents of Gaza, which is meant to pay the salaries of Hamas employees. So far, all efforts to find a solution to ensure the money is not used for Hamas' military buildup have failed. Bennett has refused so far to return to the previous cash-delivery method.

On the eve of the Succoth holiday, Bennett can breathe a sigh of relief, but as always, his reprieve is temporary. He's running a race against the political clock as well as the ticking Gaza time bomb. Will Bennett make a concession allowing the Qatari funds to reach Hamas directly that would humiliate him before the political right before November, when the Knesset is scheduled to give final approval to the state budget? Can Bennett afford an additional clash with Gaza before the budget vote that is crucial for the survival of his cabinet and hinges on the support of his Arab Islamist government partner, Ra’am?