The West Bank and the Gaza Strip are atop a barrel of gunpowder that could explode at any time. 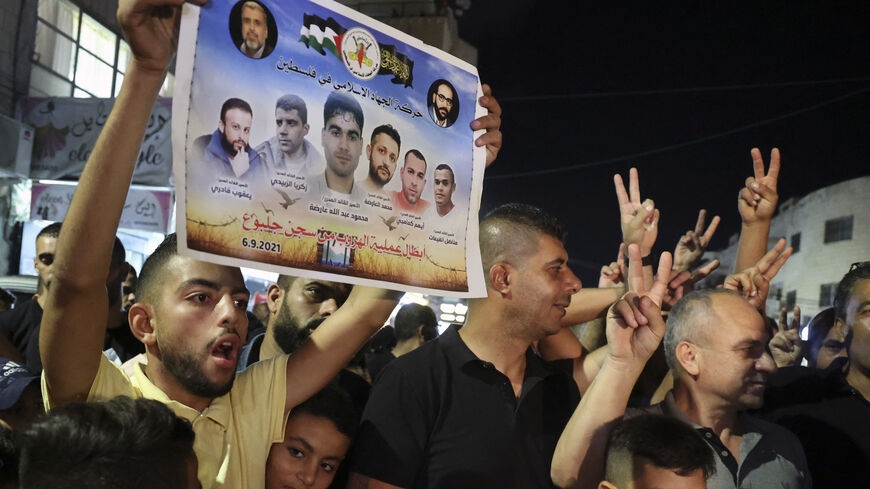 A Palestinian man flashes a poster by the militant group Islamic Jihad of the six Palestinians who escaped from an Israeli prison, as people celebrate in the Jenin camp in the northern Israeli-occupied West Bank, on Sept. 6, 2021. - JAAFAR ASHTIYEH/AFP via Getty Images

RAMALLAH, West Bank — Sept. 13 marked the 28th anniversary of the Oslo Accord, which the Palestine Liberation Organization and Israel signed in 1993. Yet the Palestinian territories seem to be closer than ever to a comprehensive intifada and further from peace.

Since Sept. 6, the West Bank and Gaza Strip have gone through daily confrontations and clashes between Palestinians and the Israeli army, after the escape of six Palestinian inmates from the Gilboa Prison. On Sept. 13, two separate stabbing attacks occurred in Jerusalem, which wounded a number of settlers. A few hours earlier, doctor Hazem Joulani in Jerusalem was killed, as he had reportedly attempted to carry out a stabbing attack, according to the Israeli police.

In the city of Jenin, in the northern West Bank, dozens of shootings targeted al-Jalama checkpoint, homemade bombs were thrown, and bullets targeted an Israeli military camp in Mount Gerizim in Nablus. Also, dozens of clashes involving stones and Molotov cocktails took place in different parts of the West Bank.

Anger mounted in the Palestinian street after Israel captured and allegedly tortured four of the jailbreakers, specially Zakaria Zubeidi, the former commander of the Al-Aqsa Martyrs Brigades.

The Palestinian factions praised the escalated confrontations in Jerusalem and the West Bank, considering them as the only option to force Israel to end its violations against the Palestinians and prisoners.

In the West Bank, tension prevails in Israeli jails, amid repression of prisoners who were scheduled to stage an open hunger strike on Sept. 17. The strike was put off after the Israeli prison service met many of their demands.

The Palestinian factions in Gaza threatened that prisoner abuse would lead to instability. The Palestinian Islamic Jihad said in a press release on Sept. 16 that they are open to all options to protect the prisoners and warned Israel against subjecting them to any danger.

Israel’s Maariv newspaper reported on Sept. 14 that the Israeli military is being prepared for a possible escalation in the near future, given the recent developments related to the Palestinian prisoners’ issue.

Jamal Huwail, a member of the Fatah Revolutionary Council in Jenin refugee camp, told Al-Monitor that anger in the West Bank is cumulative, due to the lack of political horizon, more settlements, ongoing arrests and executions, and the Judaization of Jerusalem, but that the prisoner issue increased anger at Israel.

Huwail stressed that the situation is very serious, whether in the West Bank or the Gaza Strip, and an escalation could happen. “There is no comparison between the capabilities of the Israeli army and those of the resistance," he said, "but the will of the people and fighters who have been going through hard times cannot be broken. They do not fear any threat.”

“The Israeli army is ready to storm the camp, awaiting a political decision, Yet, the resistance fighters in the camp will make them pay for it. Any price, no matter how low it is, will shake the Bennett government. This army cannot stand the killing of one or two soldiers,” he said.

Huwail, who took part in the battle of Jenin camp in 2002 and was imprisoned for seven years, said, “The current generation in the camp does not have any fears, and only understands the language of force. The proof is that they daily go to the al-Jalama checkpoint and clash with the army. They are not waiting for [the army to go to] the camp.”

“The army may storm the camp, but there will be a cost for Israel to pay and losses will be inflicted on its army,” he said. “Jenin will resist any foolishness that may be made. Gaza will not allow such a thing to happen and will join the front line. There is a possibility that Hezbollah also joins the confrontation as well. Based on that, Israel will find itself facing an open battle.”