Tension continues to prevail in the Jenin refugee camp where rounds of violence take place daily amid an Israeli threat of a large-scale military operation using helicopters. 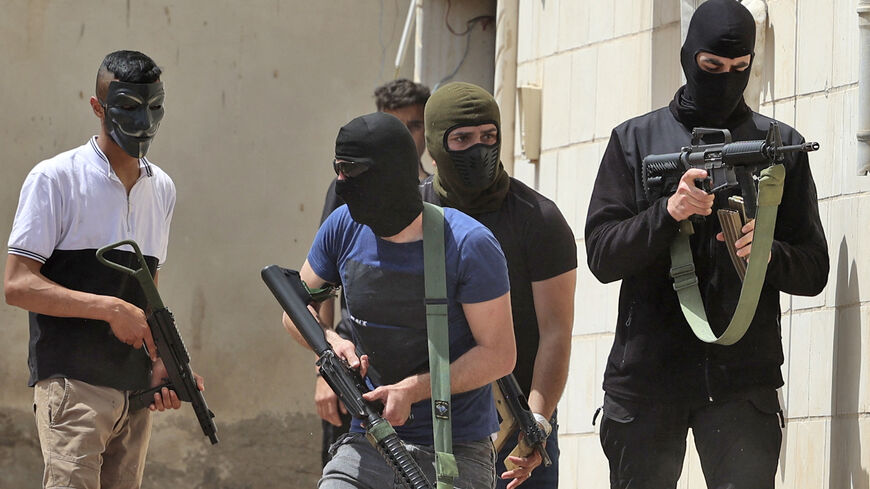 Masked Palestinian men hold automatic weapons during clashes with Israeli security forces in the West Bank city of Jenin on May 13, 2022. - JAAFAR ASHTIYEH/AFP via Getty Images

RAMALLAH, West Bank — The Jenin refugee camp in the northern West Bank continues to be a flashpoint as clashes between the camp’s armed fighters and the Israeli army have become more frequent in recent days.

In the latest round of violence, a 17-year-old Palestinian identified as Amjad al-Fayed was killed by the Israeli army in a raid on the camp and another boy was critically wounded.

The Jenin Brigade of Al-Quds Brigades, the military wing of Islamic Jihad, said in a statement on May 21, “The Israeli special forces tried to set up ambushes and infiltrate from Haifa Street (a street in Jenin) on the outskirts of the western side of Jenin city and its camp. The plot was uncovered and foiled by the resistance fighters who responded with bullets and explosive devices.”

A well-informed source from the Jenin camp who declined to be named told Al-Monitor, “The [Palestinian] fighters detected the Israeli special forces’ infiltration into the city and attacked them. When they were discovered, the Israeli forces hiding between the trees started shooting randomly, killing Amjad al-Fayed with several bullets and seriously wounding another.”

Israel has escalated its raids on the Jenin camp since Al-Jazeera veteran journalist Shireen Abu Akleh was killed during clashes in the city on May 11.

In the May 13 operation, Israeli forces surrounded the home of a wanted Palestinian youth, Mahmoud al-Dabai, leading to hourslong clashes that ended with Dabai’s arrest and the killing of an Israeli officer. Also, several people were wounded, including Daoud al-Zubeidi, brother of the former head of Fatah’s armed wing, Zakaria al-Zubaidi, who is currently in an Israeli prison. Days later, Daoud died from his injuries.

That operation seems to have derailed the Israeli army’s plan for the Jenin camp. According to Walla military correspondent Amir Bahbout, who was briefed on the Israeli army’s investigations, this is the first time in 20 years that Israeli troops are subjected to such heavy gunfire, which forced the troops to withdraw. The repeated gunfire coming from the camp popped military vehicles' tires four times. IDF officer Noam Raz was killed, according to Bahbout.

Israel’s Channel 12 cited security sources as saying that the Israeli army is considering the use of gunship helicopters during its operations in the West Bank following the May 13 raid in Jenin and the killing of Raz, in a bid to control the critical situation in the city, given the infantry forces’ failure to fend off the gunmen’s attacks.

The Jenin camp is witnessing a daily war of attrition as Israel separates the fighting locations during its operations. It has been working for months on carrying out successive blows to the camp without engaging in a comprehensive battle. This situation has raised concerns that other Palestinian areas, including the Gaza Strip, may enter into a confrontation with Israel.

Jamal Huwail, member of the Fatah Revolutionary Council in the Jenin refugee camp, told Al-Monitor, “The Israeli threats of a large-scale military operation in the camp or of using combat helicopters do not scare the camp’s residents. On the contrary, it proves that the occupation’s land forces, which were unable to confront the fighters despite the [military] capabilities discrepancy, failed militarily.”

Huwail, who spent seven years in an Israeli prison over his role during the 2002 battle of Jenin, added that the fighters in Jenin, although they have modest weapons, decided to confront the Israeli forces and prevent them from entering the camp. He noted that the camp’s advantage lies in the fact that there is national unity among the residents and popular support for the fighters.

Fadi Nahas, a researcher on Israeli national security and military affairs at the Madar Center for Israel Studies, ruled out the possibility of a large-scale military operation in Jenin camp similar to Operation Defensive Shield in 2002. He told Al-Monitor, “The Israeli army will continue to carry out specific and rapid raids to hunt down Palestinian fighters, as it fears the consequences of a large-scale military operation, especially after the assassination of Abu Akleh.”

Nahas indicated that the combat helicopters the Israeli army is reportedly considering using in its operations in Jenin have limited effectiveness since the camp is small. He ruled out a large-scale military action because such a scenario will leave many casualties, flare up other fronts and lead to the total collapse of the fragile Israeli coalition government.

Military analyst and former PLO artillery unit commander Wasef Erekat told Al-Monitor that “the Israeli army failed to storm the Jenin camp, which is why the army commanders are looking for an alternative to cover up their failure, including the possible use of combat helicopters. The Israeli troops were unable to confront the Palestinian fighters in the camp despite the military imbalance between the two sides.”

Erekat indicated that the Israeli army's use of helicopters would mean that Israel has returned to the assassinations policy at a time when the Israeli army claims that the incursions into the camp aim to arrest wanted persons.

He believes that the Israeli army is seeking a large-scale military operation that would be similar to Operation Defensive Shield, but none of the Israeli political leaders can bear the cost of such an operation. “The army is dividing its battles and attacks because it can't carry out a large-scale operation whose cost will be high and will be paid by the Israeli leadership. The latter is fragile today and unable to bear this cost. The proof is that the settlers and the family of the officer who was killed in Jenin recently hurled insults at Prime Minister [Naftali] Bennett and blamed him for the current situation,” he explained.

Erekat added that the Israeli army has pursued the phased strategy and the policy of hunting down fighters because Bennett is in a weak position that does not allow him to make a decisive decision.