Residents of the Jenin refugee camp in the northern West Bank fear yet another invasion by the Israeli army, 20 years after the Battle of Jenin. 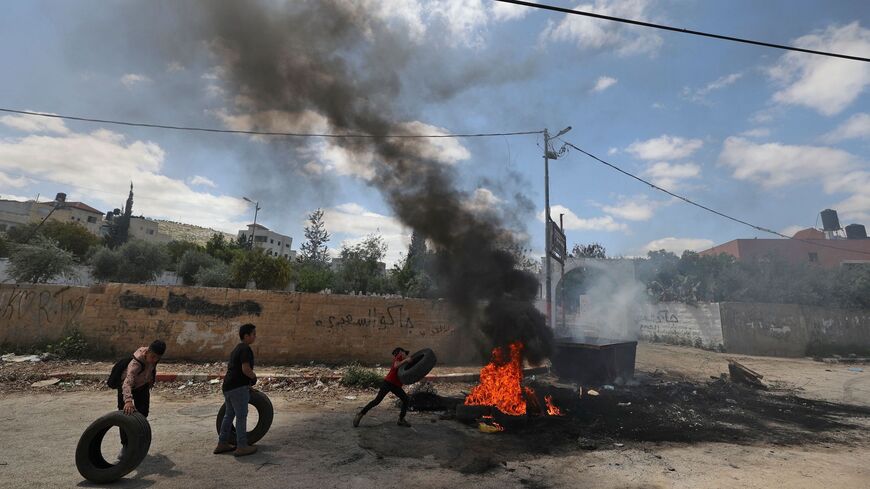 RAMALLAH, West Bank — The residents of the Jenin refugee camp in the northern West Bank are anxiously awaiting a possible Israeli invasion at any moment in light of the ongoing Israeli crackdown since one of the camp residents, Raad Hazem, carried out a deadly attack in Tel Aviv on April 7.

The Israeli army has since launched operations in the vicinity of the camp to arrest or kill fighters. On April 10, Israeli special forces failed to assassinate Hazem’s brother after shooting at his vehicle in Jenin, instead killing a young man identified as Mohammed Zakarna who was trapped in the crossfire.

On the same day, the Israeli army threatened Hazem’s father, saying it would storm the camp if he did not turn himself in.

For their part, the Palestinian factions in the Jenin camp announced in a statement on April 11 that they are ready to confront “the Israeli occupation by all available means. We will fight with the will of the victors.”

In response to the Israeli threat against Hazem’s father, the resistance factions in the Gaza Strip warned that such an operation would end the truce in Gaza and prompt them to enter into an open confrontation with the Israeli army, adding that harming Hazem’s father would be crossing a red line and they would do everything to protect him.

Although the factions in Gaza pledged not to abandon the Jenin camp, anticipation and caution prevail in the area as the residents believe that the Israeli army is waiting for the right opportunity to attack. Meanwhile, the fighters are deployed every night in the alleys of the camp in anticipation of any emergency.

Louay Tafesh from Jenin told Al-Monitor, “The threat to invade Jenin is part of the fierce campaign against our people in all cities, and the Israeli threat has intensified against the city and its camp after a number of the city's youth carried out guerrilla operations inside Israel.”

Tafesh noted, “The residents of the camp and the city have a strong sense of patriotism, in addition to a feeling of resentment, oppression and pain for the loss of martyrs, killings and arrests. The Jenin camp has never backed down from a confrontation with Israel and is now ready for open confrontation.”

Jamal Zubeidi, 66, from Jenin camp, who has lived through many confrontations with Israel, seemed unconcerned about the latest Israeli threats to invade the camp, perhaps because of the attacks he had witnessed throughout his life. “In general, we in the camp do not care about threats,” he told Al-Monitor. “People are high-spirited and willing to put up a fight. People pay no attention to threats around here.”

Zubeidi added, “The people in the camp are tired of the occupation and they want change. Long years of political negotiations have yielded no results, and the people are suffering oppression, injustice and persecution because of the occupation. The people are fed up with the Palestinian Authority’s policies and the economic situation. They want salvation, and it has been proven that resisting the occupation is the only proper response to its crimes. That is the general mood in the camp.”

He added, “We have nothing to lose in Jenin camp. Every family here has a martyr, a prisoner or a wounded person, or their house has been demolished.”

The recent Israeli threats have brought back memories of the 2002 Battle of Jenin. Mohammed Abu al-Hija, who was only 15 when the battle happened, told Al-Monitor, “I lived through the second intifada and the invasion of the camp, and now with this threat, memories come back to haunt us. Sometimes I get scared and sometimes I don't even care.”

He added, “The young generation in the camp did not experience the events of 2002. This is why the fighters today are barely 23 years old. Those of us who lived through that period sometimes feel anxious about the fate of the people and the camp, so no one wants to go through what happened in 2002.”

The residents of Jenin camp have fought hard against the Israeli army in the West Bank, specifically during the second intifada in 2000. Since then, Israel has dubbed the camp “the hornet’s nest.”

On April 3, 2002, large forces from the Israeli army surrounded and invaded the Jenin camp, but the residents’ fierce resistance resulted in the death of several Israeli soldiers, prompting the army to change its invasion plan and completely demolish part of the camp.

The Israeli army besieged the camp for 10 days and bombed it with F-16 warplanes and heavy artillery, destroying 455 houses completely and 800 houses partially, killing 58 residents and arresting hundreds. On the other hand, 50 Israeli soldiers were killed and dozens were wounded.

Although it has been 20 years since the Battle of Jenin, the camp has continued its resistance. Since the beginning of 2022, the Israeli army has killed dozens of its residents, and today it is a unique model of resistance in the West Bank, embodied by dozens of gunmen from all Palestinian factions who are confronting any Israeli incursion into the camp.

Jamal Haweel, a member of the Fatah Revolutionary Council in the Jenin camp and a professor of political science at the Arab American University, told Al-Monitor that the resistance fighters in the camp are fully prepared to confront any Israeli operation.

“The occupation army may be able to completely invade the Jenin camp, but the price it will pay is high. It will thus postpone such action because the confrontation will be very difficult, and because of it Israeli Prime Minister Naftali Bennett's political future may be lost in light of the conflict between the Israeli government and the opposition,” Haweel said.

He stressed, “The Jenin camp does not possess nuclear bombs or large weapons, but the fighters strongly believe in their cause. Israel knows that the invasion of the camp may not break its people’s will but rather contribute to the confrontation spilling over to other cities in the West Bank and Gaza and within the Green Line. Israel is not ready to pay the price of a wide-scale Palestinian confrontation.”