The dire economic situation, coupled with disappointment in the Palestinian Authority, have turned West Bank refugee camps into enclaves of violence, led by armed youths from various organizations. 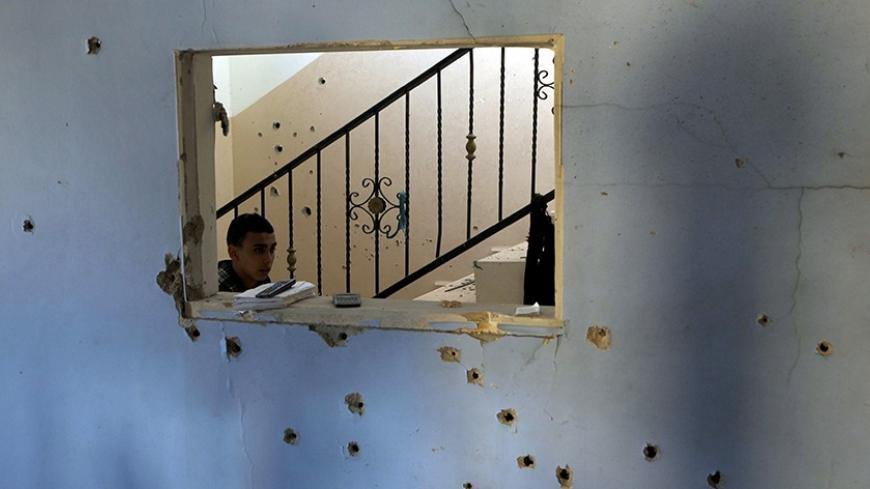 A boy walks past a bullet-riddled wall inside a house where Palestinian Hamas militant Hamza Abu al-Hija was killed in the West Bank refugee camp of Jenin, March 22, 2014. - REUTERS/Mohamad Torokman

On March 22, an Israeli elite Border Guard unit entered the refugee camp in Jenin and killed a wanted Hamas activist by the name of Hamza Abu al-Hija and two other Palestinians — one of them an Islamic Jihad activist — who were staying with him in the house where he was hiding. According to the Israel Defense Forces (IDF) and the Shin Bet, Abu al-Hija, who had been planning shooting attacks against Israeli settlers and other Israeli targets, was precisely what you would call “a ticking bomb.”

The entry of an Israeli elite operational force deep into the Jenin refugee camp has been no common occurrence in recent years, since the end of the second intifada (in 2005) and the subsequent deployment of Palestinian security forces in the West Bank. However, as of late, the refugee camps in the West Bank have been undergoing a process that might be described as the establishment of an autonomy based on fear.

This is happening mainly in the refugee camps of Nablus and Jenin. These two refugee camps, which a decade ago were labeled “the nurturing home for terrorists,” have become autonomous enclaves that Palestinian security forces avoid. In fact, for many months now, the Palestinian security services have been taking care not to enter the refugee camps for fear of being caught in gun battles. As it is, anyway, the rage and fury there toward the Palestinian Authority (PA) and everything that it stands for have been mounting, and the last thing that Palestinian President Mahmoud Abbas would be interested in is violent confrontations, much less so shoot-outs and bloodshed.

Meanwhile, considerable forces of armed youths from all the organizations, driven by frustration, are pooling resources and getting organized in the refugee camps. In this melting pot, a comrades-in-arms alliance is being forged, creating a unifying and consolidating component. Thus, joining forces in the spirit of one for all and all for one, a “defense wall,” so to speak, has been built against the PA forces. This comrades-in-arms spirit uniting the organizations is reflected, inter alia, in the joint statement issued by Hamas, Islamic Jihad and the Fatah Al-Aqsa Martyrs Brigades activists, pledging to avenge the death of Abu al-Hija.

Indeed, such close cooperation between Hamas and Fatah's Al-Aqsa Martyrs Brigades has not been evidenced since the Hamas takeover in the Gaza Strip in June 2007.

The armed youths of the refugee camps, whom the PA security forces fear, were mere boys, and some of them only young children, when the second intifada was raging. The events and sights of Operation Defensive Shield (the large-scale military operation begun on March 29, 2002, following the attack at the Park Hotel in the Israeli coastal city of Netanya) were deeply etched into their memories, shaping their worldview. And it is from this worldview that they derived their motivation and desire to fight and take revenge on the Israelis.

Thus, for instance, Abu al-Hija’s father, Gamal, was injured in the early days of the second intifada, when he was putting together an explosive bomb that blew up in his face. He was eventually sentenced to life imprisonment for planning suicide attacks. His son Hamza has followed in his footsteps. And so did many other young people in the refugee camps in Jenin, Nablus and elsewhere in the West Bank, where the prevalent feeling among the youths is that they have nothing to lose.

Suddenly again, just as during the second intifada, the only way for young people seeking to attain some social status is to join one of the armed groups. Being an active and valued member of one of the organizations — Hamas, Islamic Jihad or even the Fatah Al-Aqsa Martyrs Brigades (which, for the most part, defy PA rule) — provides a desirable social status that cannot be otherwise acquired.

Thus, unemployment, poverty, lack of hope and above all — as stated before — the deep disappointment in the PA and everything that its officials stand for have sparked rage and fury, all directed at Israel as well as at the PA agencies. Slowly but steadily, the refugee camps over the years have turned into autonomous enclaves, where law and order are determined and controlled by groups of armed youths who grew up during the second intifada and have been shaped by the events surrounding it.

Were it not for the common enemy — namely, Israel — then, as witnessed elsewhere, the central government would bear the brunt of the fury. However, in the current state of affairs of life under occupation, the rage is directed against the Israelis first, and only then against those who are seen as their collaborators — that is, the PA officials. Palestinian security forces had been trying, unsuccessfully, to lay their hands on Hamza Abu al-Hija before he was eliminated. That’s why many in the territories believe that the Palestinian security services acted hand in hand with the Israelis in this case, and provided information on his whereabouts, thus leading to his killing.

Yet, it is not the economic situation alone that has triggered the formation of autonomous enclaves in the refugee camps. The PA led by Mahmoud Abbas, which set out to establish ''one Authority under one weapon,'' (meaning with no other armed organizations) has failed to follow through and realize its goal. Vast quantities of arms are still lying around in the refugee camps, and there are armed militants from all the various organizations who were never disarmed. What’s more, the Palestinian security forces have failed to dismantle the Hamas infrastructures and have been indulgent with Islamic Jihad and other organizations.

Even the Al-Aqsa Martyrs Brigades have not been completely disarmed. The PA acted only when the weapons were directly aimed against the authority’s emblems of power, the way it happened in the case of Zakaria Zubeidi, the commander of the Al-Aqsa Martyrs Brigades in Jenin, in June 2012, who was suspected of involvement in the shooting attack on the governor of Jenin, Kadoura Musa. The latter died of a heart attack following the shooting attack. From time to time, armed militants associated with Al-Aqsa Martyrs Brigades, who were involved in gunfire incidents with the PA forces, were detained. However, most of those militants were released shortly afterward or got off with light prison sentences.

A totally different kind of game has been played vis-a-vis Hamas and Islamic Jihad. In their case, the PA has closed its eyes to the presence of armed militants, well aware that any attempt to disarm them or getting entangled in an armed confrontation with them would inevitably set off retaliation attacks by Hamas members on the Fatah activists in the Gaza Strip. The desire to maintain “domestic peace” between the West Bank and Gaza, and Fatah and Hamas, has left the weapons in the hands of Hamas militants.

It turns out that the PA has still not learned the lesson following the takeover of Gaza by Hamas. Whether in the days of PA Chairman Yasser Arafat or during the reign of his successor, Mahmoud Abbas, the PA has consistently refrained from disarming the armed militias. The motto of “One Authority under one weapon” has remained a hollow and meaningless slogan.

In the case of Gaza, it cost Mahmoud Abbas rule over the Strip. Fatah and PA officials were defeated, humiliated and driven away. The Gaza Strip fell into the hands of Hamas.

Alas, as noted, the lesson has not been learned. The way of the youths of the refugee camps to a jihad against Israel may well pass through the Muqata compound.