Israel targets Palestnian armed groups and fears resistance could spread to other cities in the West Bank. 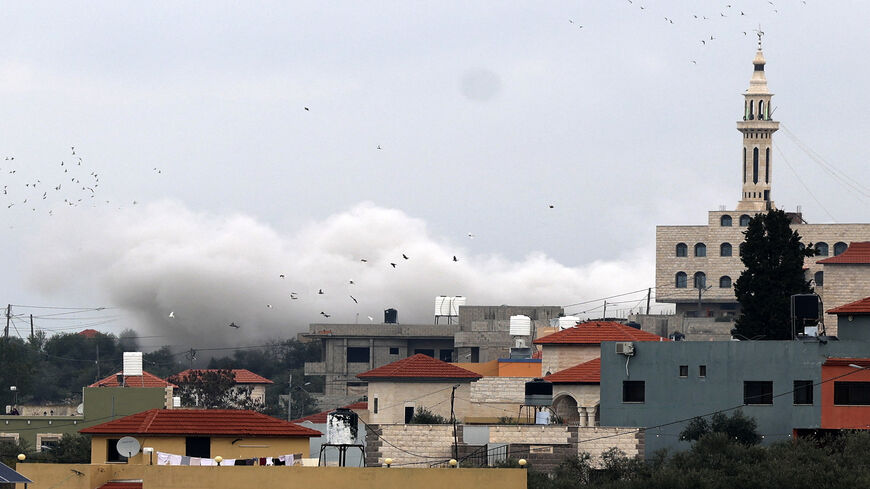 Smoke billows from the house of a Palestinian suspect after it was demolished by Israeli security forces, in the village of Silat al-Harithiya near the flashpoint town of Jenin, West Bank, March 8, 2022. - Jaafar Ashtiyeh/AFP via Getty Images

RAMALLAH, West Bank — Jenin governorate in the northern West Bank is like a circle of fire that Israel is trying to put out, amid fears that it would spread to other areas in the West Bank, especially as the Muslim holy month of Ramadan is drawing near, at the beginning of April.

The Israeli army has recently intensified its raids on the city, which faces armed clashes on part of the Palestinian resistance fighters.

On March 16, Israeli soldiers arrested Momen Nashti, a young Palestinian who was injured in the leg during a shootout that erupted at the time of his arrest in Jenin. An Israeli soldier was also wounded in the fighting.

The Israeli army has been highly relying on its special units to carry out arrests against alleged terrorists inside Jenin, often leading to the killing of Palestinians.

During a raid in Jenin city March 1, Israeli special forces killed Abdullah al-Husari, a young man belonging to the Jenin Brigade of Al-Quds Brigades, the military wing of Islamic Jihad, as well as another young Palestinian, Shadi Najm.

Jamal Haweel, member of the Fatah Revolutionary Council and a former prisoner, told Al-Monitor, “Jenin has a legacy of hundreds of years in resistance that has been passed on from one generation to the next.”

“Resistance in the city has become our lifestyle, our culture, our life,” he added, stressing that all Israeli and Western attempts to change the city’s identity since 2002 have failed.

Haweel, who participated in the Battle of Jenin in the Jenin refugee camp during the second intifada in 2002, said, “The [Israeli] occupation forces’ daily attacks and attempts to turn the West Bank into a settlement is the main reason for the resistance in Jenin, which is characterized by a unified resistance across the governorate’s countryside, city, camps and factions, where the members of Hamas, Islamic Jihad, Fatah and the Popular Front for the Liberation of Palestine fight side by side.”

Haweel noted that Israel fears Jenin would become a model in all of the West Bank, as resistance cells have recently emerged in Nablus and other cities in the West Bank.

On Dec. 16, 2021, an Israeli settler from the Homesh settlement outpost near Nablus was killed during a shootout between the Israeli army and members of Al-Quds Brigades at the entrance of the town of Silat al-Harithiya in Jenin governorate.

The settler’s killing was a major concern for the Israeli security forces, which, since then, have repeatedly raided Jenin and its environs. However, each time they are faced with a salvo of shootings while their military checkpoints are regularly attacked by Palestinians.

The town of Silat al-Harithiya emerged as a new arena for resistance in Jenin. On March 7, dozens of Palestinian gunmen opened fire on the Israeli army, while two soldiers were run over at the entrance of the town.

Khader Adnan, Islamic Jihad leader in Jenin, told Al-Monitor, “Jenin has a great history of resistance and hosts military leaders of all factions, and this inspired the younger generations to follow suit.”

He said, “Most importantly, Jenin and its camp have been — during the first and second intifada — a stronghold for Islamic Jihad, which upholds the ideology of fighting until the last breath, and never to surrender."

Adnan noted, “The Israeli occupation forces fear that the Jenin model would be passed on to other West Bank governorates, especially since it is a paragon of harmony and coordination between the fighters of Al-Quds Brigades, [Fatah’s] Al-Aqsa Martyrs Brigades and Izz ad-Din al-Qassam Brigades [Hamas’ military wing], despite the Palestinian security services’ security grip and ongoing crackdown on resistance fighters and former prisoners.”

He added, “Jenin is also witnessing the emergence of great young fighters. Jamil al-Amouri, a young leader of Al-Quds Brigades, was martyred [killed by Israeli forces] in June 2021, which was a milestone in the history of resistance in the city, especially since many young men were influenced by his martyrdom and joined the path of resistance.”

Amid security concerns of escalating tension in the West Bank and the Gaza Strip in the coming weeks, Israel decided for the first time in five years not to close off the West Bank on Purim, which could add additional pressure on Palestinians. Israel also decided not to close Bab al-Amud (Damascus Gate) in Jerusalem with iron barriers during the month of Ramadan, which could provoke confrontations with Jerusalemites.

Fayez Abbas, expert on Israeli affairs who works at the Palestinian Broadcasting Corporation, told Al-Monitor, “The Israeli security establishment views the Jenin area — and specifically its camp — as a very dangerous zone, with the intensity of the confrontations rising.” He pointed out that Israel’s main concern is that the city is close to the Green Line.

“This is not to mention that Israel has not yet forgotten what happened to its army in the battle of the camp in 2002,” he said.

Abbas noted that the Israeli security and intelligence services are keeping an eye out for what is happening in Jenin around the clock. “The city is stormed almost every day, for fear of the growing military power there and its impact on other areas.

“There are Israeli fears of the escalating tension in the West Bank, which could culminate in the outbreak of a new intifada. Israeli security leaders are warning of the danger of taking special measures in relation to Jerusalem and Al-Aqsa Mosque, which could ignite all Palestinian lands — not only Jenin,” he explained.

Abbas said that the Israeli media is trying to find an excuse for the Israeli army’s repeated raids on the Jenin camp. “Therefore, there have been many reports saying that the PA lost control over the security situation in the area, which is why the Israeli army is taking over but in cooperation with the Palestinian leadership, which is not true.”

He concluded, “Two members of the Palestinian security forces were martyred when Israeli troops assassinated Jamil al-Amouri in June 2021. They were stationed at their headquarters in the city."