Armed clashes with Israeli forces have resurfaced in the West Bank city of Jenin, where they have become an almost daily occurrence. 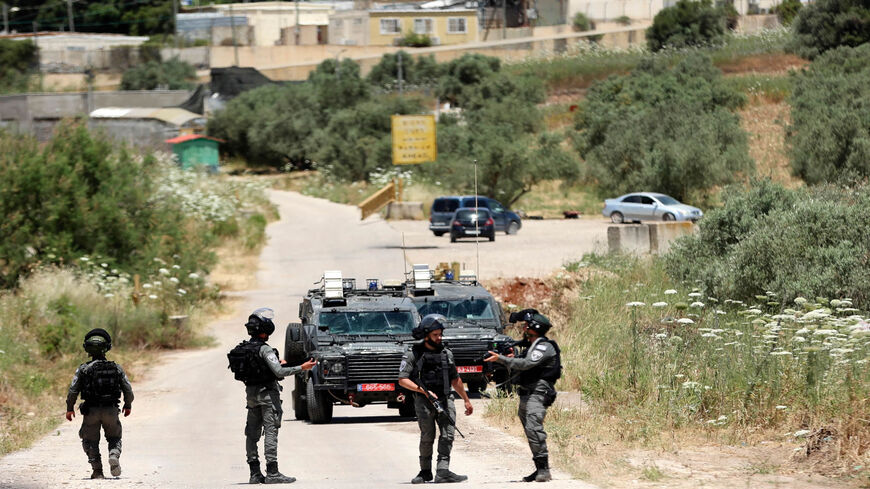 Members of the Israeli security block the road near the Salem checkpoint leading to Jenin, following an attack by Palestinians on an Israeli base, pictured in the background, West Bank, May 7, 2021. - Jaafar Ashtiyeh/AFP via Getty Images

RAMALLAH, West Bank — The city of Jenin, in the northern West Bank, is back to the forefront amid daily incidents in the past weeks involving clashes between armed young men of the Palestinian resistance in the area and Israeli forces. On July 12, a number of streets witnessed some of the most violent armed clashes in years after special Israeli forces raided the area to arrest a number of wanted men. Six Palestinians were shot and injured by the Israeli military, and another six were arrested.

Palestinian youths have been confronting the Israeli forces using light firearms such as Kalashnikov and M16 rifles. They also throw Molotov cocktails and homemade bombs at army vehicles. Clashes in Jenin have been taking place on a daily basis since the 11-day war on the Gaza strip began May 10, and has become more violent since June 10 after Israeli forces shot dead three men in Jenin. Two of the victims were from the Palestinian Authority's military intelligence, and they were killed in front of their duty station during the Israeli military’s crackdown on Al-Quds Brigades, the military wing of the Islamic Jihad movement. The third victim was identified as Jamil al-Amouri, a member of Al-Quds Brigades. Meanwhile, his friend, Wissam Abu Zeid, was arrested after he was hit during the operation.

The clashes in Jenin are not restricted to fighting the Israeli forces raiding the area. In the last few weeks, Israeli checkpoints and military stations around the city were also attacked by angry Palestinains. On several occasions, bullets targeted al-Jalama checkpoint, which separates the city of Jenin from the Green Line.

Because the clashes in Jenin are predominantly led by members and supporters of Al-Quds Brigades, they worry the Israeli forces. The Israeli Yedioth Ahronoth newspaper reported July 14, based on the account of the commander of Israeli special forces, that the forces survived an attempt to ambush them two weeks earlier in Jenin, in reference to the incident June 10 that led to the death of the three Palestinians.

The commander told the newspaper, “We entered Jenin to arrest a number of people, and we were expecting a normal sequence of events. After the arrest, as we were leaving, we were shot at close range. Previously, shots had come from a distance of hundreds of meters.”

He said, “The fighter fired with great audacity at the force members. They had located us and attacked us in a well-planned ambush as we were leaving Jenin. They followed us in their cars, and near one of the intersections they got out and fired heavily at close range.”

He continued, “Deadly fire was opened from both sides. This clash reminded us of south Lebanon, and it took us time to find out what was happening. Then motorcyclists approached our vehicles and started throwing large explosives. We were caught in the middle of explosions and shootings that came from everywhere. It was one surprise after another.”

A source from Islamic Jihad in Jenin told Al-Monitor on condition of anonymity, “The resistance in Jenin has not subsided. It has its moments of strength and moments of weakness. Yet resisting the occupation continues, especially in light of the deliberate invasion of the Jenin camp and city, and the constant provocation of the Palestinians.”

With the start of the second Palestinian intifada in 2000, Jenin and the Jenin refugee camp became a major stronghold of the Islamic Jihad movement. Later, it established its military wing, Al-Quds Brigades, which played a key role in leading the battle of the Jenin camp in 2002. Despite the continuous Israeli crackdown on the movement's members in Jenin after the intifada, they managed to establish armed cells and carry out operations against the Israeli army.

The intense military confrontation in Jenin coincided with the escalating military action in the West Bank, namely in Jerusalem and Al-Aqsa Mosque, which were followed by the war in Gaza. During that time, Israeli checkpoints and settlements in the West Bank were the targets of shootings. The latest incident happened on the evening of July 15 when a shooting took place at the Giv'at Asaf outpost, north of Ramallah. On June 13, a shooting at Qalandia checkpoint left an Israeli security officer injured. Some cities witnessed similar armed incidents, such as in Tubas city on June 2, when clashes erupted after Israeli forces raided the home of a wanted Palestinian, in the first such incident in Tubas in years.

As the Israeli army continues to raid Palestinian cities and towns almost daily, Palestinian factions called for resisting the Israeli army with force. In a July 12 statement, Islamic Jihad stated, “The resistance and every armed faction has a duty to face the enemy. Stopping the raids of cities, villages and refugee camps in the West Bank does not happen through negotiations but through force. It is the only way to deter the occupation.”

Jamal Hawil, a member of the Fatah Revolutionary Council and one of the leaders of the Jenin refugee camp battle in 2002, told Al-Monitor, “The resistance in Jenin continues using various methods to respond to the daily provocation of citizens by the occupation that is raiding the city and its camp and arresting young men.”

Hawil noted, “The resistance in Jenin has hindered Israel's attempts to push the city and its people into compliance and create a status quo accepting its sovereignty. The resistance has brought the conflict with the occupation back to square one.”

He added, “Through raiding the city and the violations, Israel is trying to gauge the attitudes of the inhabitants in the area. It has tried to stifle the will to resist and to restructure society and push it to accept the occupation. The popular support for the resistance burst the Israeli bubble of lies.”

He pointed out that after the 2002 battle in the camp, Israel has repeatedly tried to make the city a deterrence model. The Israelis believed for years that they had succeeded in deterring resistance in Jenin, he said, adding that they thought the city had surrendered, but the recent incidents are evidence of the complete opposite.