Attacks on Israeli soldiers on Sept. 20 and Sept. 22 reveal a deep split within Fatah between those who desire a return to armed resistance and those who prefer negotiations. 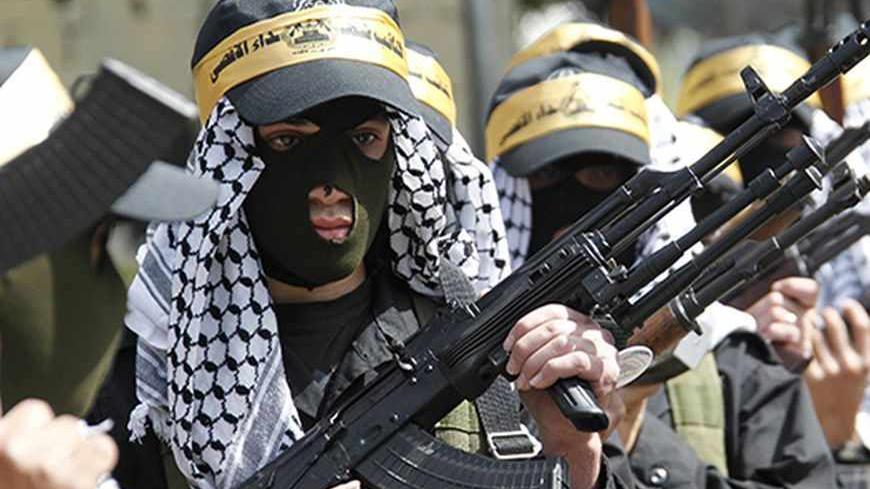 Palestinian Fatah members carry their weapons as they take part in a parade to mark the 65th anniversary of the Nakba in the Palestinian refugee camp Ein al-Hilweh, near the port city of Sidon, southern Lebanon, May 15, 2013. - REUTERS/Ali Hashisho

RAMALLAH, West Bank — The deaths of two Israeli soldiers last weekend, in the West Bank towns of Qalqilya on Sept. 21 and Hebron on Sept. 22, significantly added to the insecurity that has prevailed in the West Bank since the resumption of negotiations on July 30. The West Bank witnessed a number of incursions in August by Israeli occupation forces that left six martyrs.

The succession of events now gives the impression that the third intifada is drawing near, presaging the collapse of peace negotiations between Palestinians and Israelis. It also indicates that the armed Palestinian resistance movement had resumed its activities, with Israel holding Fatah’s Al-Aqsa Martyrs Brigades responsible for the death of the Israeli soldier in Hebron. But, Fatah al-Intifada, which broke away from Fatah decades ago, quickly claimed responsibility for this operation, the circumstances of which remain unclear.

Omar Abu Arkoub, a journalist specializing in the Hebrew press, told Al-Monitor that the Israeli media “had hastened to hold the Fatah-affiliated Al-Aqsa Martyrs Brigades responsible for the Hebron operation, and began inciting against Fatah and the Palestinian Authority [PA]. [Israeli media outlets] accused the PA of not condemning the killing of Israelis, and even claiming that some of the PA’s leaders were also guilty of incitement.”

Fueling this Israeli incitement campaign were fiery statements that spread among the Palestinian populace by Hebron native and member of Fatah’s Central Committee, Abbas Zaki, who affirmed in press statements that the Israeli soldier killed in Hebron was not there on a picnic.

Israeli accusations aimed at Fatah, fiery statements by some Fatah leaders, the scrutinization of the political identities of martyrs who fell in Qalandia’s two refugee camps near Ramallah and in the Jenin refugee camp, as well as the armed skirmishes between security forces and some Fatah members in the Nablus camps, all lead to the belief that Fatah’s military wing had returned to the forefront of Palestinian armed resistance in the West Bank. This is alongside a small presence by the Islamic Jihad’s Al-Quds Brigades, a member of which was assassinated by occupation forces in the Jenin camp on Sept. 17.

“The Israelis have in the past accused the Al-Aqsa Martyrs and Al-Quds Brigades of controlling Palestinian refugee camps, particularly in the northern areas of the West Bank, which constitutes a threat to Israel and the PA alike,” Khalil Chahine, a writer and political analyst at the Palestinian Center for Policy Research and Strategic Studies, stated to Al-Monitor.

Despite his assertion about the existence of “difficulties in casting blame for the Qalqilya and Hebron operations as a result of increasing Israeli violations that provide fertile ground for the development of organized or individual Palestinian resistance efforts,” Chahine added, “Proving that the Al-Aqsa Brigades were responsible for the death of the two soldiers would result in great problems for Fatah, the leaders of which are conducting negotiations with Israel.”

“A statement by Fatah al-Intifada was circulated in the media claiming responsibility for the death of the Israeli soldier in Hebron. Here, we must differentiate between Fatah and Fatah al-Intifada, which broke away from Fatah that is now leading the peace process, and emphasize the hostile nature of the relationship between the two,” prominent Fatah leader Nabil Amro affirmed to Al-Monitor.

Fatah al-Intifada is a Palestinian faction that split from Fatah in 1983 to oppose Yasser Arafat with Syrian support. It is still active in Syria, Jordan and Lebanon, and had not previously played a role in the Palestinian occupied territories prior to the Hebron operation, which it quickly claimed responsibility for in a statement that was published in the media.

But, according to Chahine, what increases the likelihood that the Al-Aqsa Brigades are responsible for the two operations is “the public appearance of armed Al-Aqsa Brigades elements in the Nablus and Jenin camps in the north of the West Bank. This probably means that internal disputes are raging inside Fatah on the one hand, and between the security agencies and armed Fatah members on the other.”

“All the names being circulated — such as the Al-Aqsa Martyrs Brigades' Hebron Knights, the Yasser Arafat Brigades and others — are all pseudonyms for the Al-Aqsa Martyrs Brigades, the military arm of Fatah. The different nomenclatures came probably as a result of the fact that most Al-Aqsa Brigades members signed pledges with Israel and the PA not to engage in any armed actions in return for pardons and promises not to be targeted for assassination or arrest, as stipulated by the US Dayton Plan of 2006, which aimed to dismantle the Al-Aqsa Brigades military wing and replace its military leaders with political leaders,” according to a young Fatah leader who spoke to Al-Monitor on condition of anonymity.

Ahmed Abu al-Azm, an academic and political analyst at Birzeit University in the West Bank, believes that there are still Palestinians who welcome military operations and endorse armed resistance without conditions or strategies.

“Those who support military operations against Israeli occupation may not belong to any specific political faction, or may be members of Fatah who still proclaim belonging to the latter’s military wing, the Al-Aqsa Martyrs Brigades, and who spearheaded military operations during the Qalandia refugee camp invasion of August 2013 and the Qalqilya operation. It is certain that these operations greatly upset President Mahmoud Abbas, who does not endorse armed resistance; his anger further exacerbated by the fact that some members of Fatah, which he heads, sanction and insist on this type of resistance effort,” Abu al-Azm said.

In light of this, no one was surprised by the media squabbling that took place between Palestinian and Israeli outlets concerning Abbas’ position about the killing of the two soldiers. For a while, the Palestinian media outlets relayed his statement word for word: “We condemn and denounce the killings and ask that Israelis also condemn the killings”; their Israeli counterparts merely said that Abbas condemned the killings and offered his condolences to the families of the soldiers.

The facts on the ground thus reflect the Al-Aqsa Martyrs Brigades’ return to the resistance scene on the West Bank, in a manner that goes beyond mere accusations made against them by occupation forces, to actually engage those same forces in battle when they conduct night raids in refugee camps. These brigades are also silently clashing with factions inside Fatah itself, whose official stance insists on negotiations, while some of its members still insist on carrying arms and resisting.