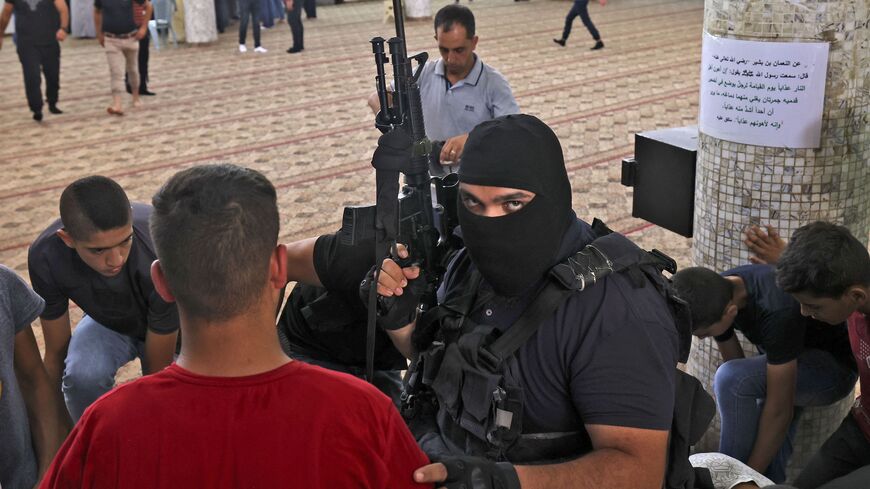 A fighter looks on while standing with mourners at a mosque during the funeral of Palestinian Mohammed Musa Mohammed Sabaaneh in Jenin in the occupied West Bank on Sept. 6, 2022. - ABBAS MOMANI/AFP via Getty Images

RAMALLAH, West Bank — Palestinians are waking up almost every day to news of violence and armed clashes across the West Bank.

The armed clashes, which for months had been limited to the Jenin refugee camp and the old city of Nablus, have now expanded to other areas of the West Bank, including the Balata refugee camp in Nablus, al-Faraa camp near Tubas, the village of Rujib near Nablus, the village of Silwad near Ramallah and the towns of Burqin and Qabatiya near Jenin.

On Sept. 4, a group of Palestinians opened fire at a bus carrying Israeli soldiers near the settlement of Hamra in the Jordan Valley, wounding seven of them, in what the Israeli media described as a “qualitative shift” in the Palestinian operations targeting Israelis in the West Bank. The perpetrators of the attack were immediately arrested.

On the evening of the same day, Palestinian militants opened fire at an Israeli military checkpoint near Ramallah, wounding four soldiers.

On Sept. 7, a round of clashes between Palestinians and Israeli forces broke out in al-Faraa camp near Tubas, during which one Palestinian youth was killed.

On Sept. 6, more than 100 military vehicles raided the Jenin refugee camp in the northern West Bank as part of an operation to destroy the house of Raad Khazem, who was behind the deadly shooting in Tel Aviv in April that killed three Israelis.

A shootout erupted after the Israeli raid, leaving one Palestinian youth dead and others injured.

Earlier on Sept. 5, a Palestinian who belonged to the Islamic Jihad movement was killed during clashes with the Israeli army in Jenin.

Heavy fighting was reported in the Jenin refugee camp on Sept. 2, one day after violence in the Balata refugee camp and the city of al-Bireh lasted for hours.

On Aug. 31, Palestinian militants belonging to the so-called Nablus Brigade, fired at a bus carrying Israeli settlers on the road between Nablus and Qalqiliya.

Meanwhile, several Israeli settlers were wounded during clashes with Palestinians as they attempted to enter Joseph’s Tomb in Nablus on Aug. 30.

On the same day, heavy gunfire erupted between two young Palestinians and the Israeli army, after the men barricaded themselves in a house in the village of Rujib. The shooting lasted for hours, as the house was targeted with shoulder-fired missiles, before the two young men turned themselves in after they ran out of ammunition.

Within 48 hours Aug. 29-31, 12 shooting attacks were recorded in the West Bank at 11 points of confrontation, causing many casualties among the settlers, according to local reports.

Israel’s Kan 11 channel reported that 60 shooting attacks were carried out against the Israeli army between January and late August, compared with 50 during 2021 and 48 in 2020. According to the Israeli channel, the army thwarted 220 attacks this year.

Commenting on the challenges that prevent this armed action from turning into a full-fledged intifada, Adnan said, “This requires efforts from all factions to provide the necessary capabilities to all the resistance fighters. Also, the daily arrests, assassinations and pursuits carried out by the [Israeli] occupation during its raids on the Palestinian cities, villages and camps, and the security cooperation between Israel and the Palestinian security services prevent a large-scale confrontation from taking place.”

“This resistance began to recover in the West Bank in 2014, because it was influenced by the Israeli aggression on Gaza in the same year and the outbreak of the Jerusalem uprising in 2015, which involved stabbing and ramming attacks and individual operations that appeared as a form of resistance,” he added.

Signs indicate that a significant escalation would be likely in the last third of this year in the West Bank, in light of the increased daily Israeli attacks, the accelerated settlement projects, the daily raids into cities, villages and towns, and the possibility of a large-scale Israeli army raid into the northern West Bank, which could lead to an explosion of the whole situation.

Israeli officials and analysts are concerned about the growth and expansion of the armed resistance in the West Bank.

Yedioth Ahronoth military analyst Ron Ben-Yishai wrote Aug. 31, “There is one issue that is preoccupying the Israeli army and the Shin Bet more than the Iranian nuclear deal and even more that [Hezbollah leader] Hassan Nasrallah’s threats,” and this issue is the West Bank.

Ben-Yishai quoted a high-ranking Israeli security source as saying, “The West Bank, especially its northern part, is boiling, and things could slide into a violent popular uprising. The security establishment must prepare for such developments and try to prevent them.”

Commenting on the clashes in the village Rujib, Israeli journalist Ohad Ben Hemo tweeted Aug. 30 that resisting the arrests with bullets and weapons has become a matter of concern to the Israeli army and intelligence.

The operations that used to end within a few minutes have turned into complex arrests that involve shootings and even missiles, he added.

Amir Bohbot, the military editor and senior defense analyst for the Israeli Walla website, wrote Sept. 1 that the recent escalation has forced the Israeli army and the Shin Bet to consider launching a large-scale operation in Nablus and Jenin.

Elif Sabbagh, an expert on Israeli affairs based inside Israel and a professor of political history, told Al-Monitor, “Israel has taken the decision to invade the West Bank in early 2022, and launched in February ‘Operation Break the Wave.’ This operation is based on singling out resistance fighters and the West Bank cities and towns.”

He added, “At first, the Israeli operation focused on Jenin city and its refugee camp, before expanding to Jerusalem to allow [Israelis] to hold the provocative Flag March. And indeed, they succeeded in holding the flag march, which encouraged Israel to launch its war on Gaza [in May]. After that, the Israeli army redirected its focus on the West Bank as part of Operation Break the Wave.”

Sabbagh said that some Israeli analysts are stressing the failure of Israel’s Operation Break the Wave because it prompted new waves of confrontation in other areas of the West Bank, beyond the Jenin camp, which they view as a threat and indicates the decline of the Palestinian Authority’s role, the growing popular support for the resistance, and the failure of the Israeli-PA security coordination to prevent more confrontations.

Sabbagh added that Israel fears an uprising against both the PA and Israel that could result in Hamas ruling the West Bank.