Embracing an opposite approach to that of former Prime Minister Benjamin Netanyahu, Defense Minister Benny Gantz tries reinforcing the status of the Palestinian Authority and Palestinian President Mahmoud Abbas. 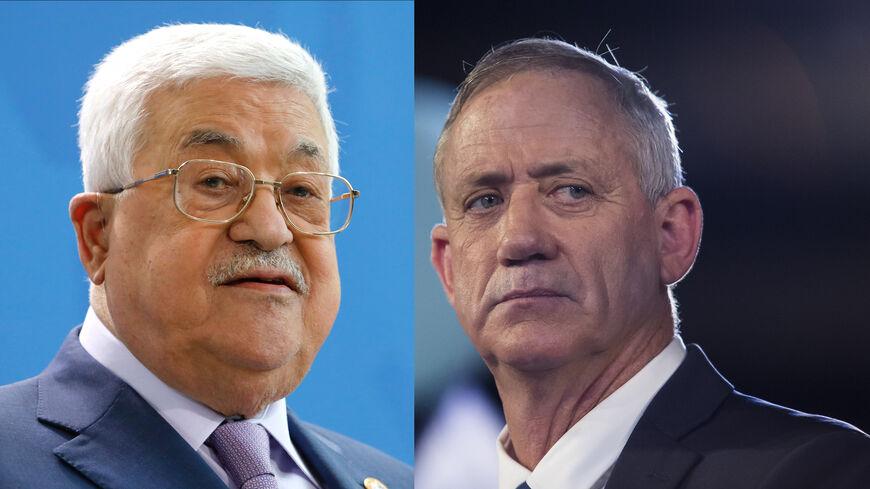 An embarrassing moment took a heartwarming turn at the Dec. 28 meeting between Palestinian President Mahmoud Abbas and his host, Israeli Defense Minister Benny Gantz, when the door opened and in walked a uniformed soldier. The soldier was Gantz’s son, who is performing his compulsory military service and was on leave at the family home where the unusual meeting took place. The Palestinian guests froze for a heartbeat, but it was Abbas himself, a man who has seen it all, who broke the ice. “I hope peace comes out of this house,” he was quoted in Israeli media as saying.

The meeting will not produce peace. Not immediately at least. In any case, its goal was primarily to prevent war. It brought Abbas for his first official meeting inside Israeli territory since 2010 (except for partaking in the funeral ceremony for late President Shimon Peres). And not just any territory — a square kilometer fraught with symbolism and history. Gantz’s home lies in the town of Rosh Ha’ayin, adjacent to the Israeli-Arab town of Kafr Qasim, headquarters of the Shura Council, the supreme spiritual body of the Islamic movement in Israel and of its political party Ra’am, the first Arab party ever to join an Israeli governing coalition.

The right-wing Israeli opposition, as expected, assailed Gantz for hosting Abbas, whom they consider a Holocaust denier and arch-terrorist. In fact, right-wing members of the politically diverse government were clearly not keen either on the intimate meeting. Abbas himself did not fare much better at home, especially with the Hamas movement that accused him of kowtowing to the former chief of the Israeli army.

Still, the two leaders’ reasons for meeting were weightier than political considerations. The highly sensitive meeting was coordinated by US national security adviser Jake Sullivan, who visited Israel and the Palestinian Authority (PA) Dec. 22. Sullivan promised Abbas that he would not be wasting his time by meeting Gantz, who was preparing a package of tangible incentives that would benefit residents of the PA so desperate for a relaxation of Israeli strictures and some good news. Abbas decided to go.

The package Gantz announced Dec. 29 was impressive, indeed, prompting the ire of the Israeli right. Permits for the construction of Palestinian homes in Area C of the West Bank, easing travel for hundreds of Palestinian traders, continued registration of thousands of statusless Palestinians in the Palestinian population registry (controlled by Israel) and an advance on some 100 million Israeli shekels ($32 milllion) that Israel has collected in taxes for the PA.

Gantz’s generosity was not altruistic. It was prompted by a surge in Palestinian violence against Israelis in the West Bank and East Jerusalem in recent weeks — stabbing and shooting attacks, stone throwing, growing unrest over Islam’s holy sites in Jerusalem. The new head of the Shin Bet security agency, Ronen Bar, also reported to the government recently about the growing potential for another round of Israeli-Palestinian violence and advised urgent measures to calm the unrest and prove to the Palestinians that a faint light of some sort was showing at the end of the tunnel. Gantz rose to the challenge.

The Israeli defense chief, who has become Washington’s “go to guy” in the Israeli government in recent months, has established his position as the responsible Israeli adult vis-a-vis Ramallah, too. After 12 years under Prime Minister Benjamin Netanyahu, Gantz is turning the Israeli ship around. While Netanyahu did all he could to weaken the PA and strengthen Hamas, Gantz is taking the opposite tact, trying to undermine Hamas and bolster the PA, dismissing the cynical criticism of the political right.

“Only someone who is responsible for sending soldiers into battle knows how deep the obligation to prevent it is,” Gantz tweeted. Clearly, Gantz’s role model is the late Prime Minister Yitzhak Rabin, also a former military general who in his later years was a staunch advocate of peace with the Palestinians. Gantz hopes he fares better than his hero, who was assassinated in 1995 by a Jewish fanatic at the height of the Oslo peace process with the Palestinians.

Reportedly, the atmosphere at the Gantz-Abbas meeting was described as intimate and positive, but Abbas also vented his frustration and anger with the Israelis. With head of the Palestinian General Authority for Civil Affairs Hussein al-Sheikh and head of the PA’s intelligence apparatus Majid Faraj at his side, the aging leader spoke of his distress and deep almost daily humiliation at the hands of the Israelis. Reportedly, he conceded that his standing with his own public was “not easy” and explained that the Palestinians were desperate for some hope. The sides agreed that in briefings about the meeting, they would both note that diplomatic issues were also raised and ways to renew negotiations between the sides were examined. Nonetheless, both men realize that significant diplomatic negotiations would not take place as long as the current government was alive and kicking.

Security was the most sensitive issue that came up. Both leaders affirmed their commitment to blocking violence. Abbas set out in detail a list of the growing attacks on Palestinians by radical settlers, a marginal Jewish minority that creates ongoing friction with the Palestinians throughout the West Bank. Gantz promised that the army and the Shin Bet were doing all they could to instill calm, and sought to focus on Palestinian terrorism, which he said was far more significant in the scheme of things.

In fact, both Abbas and Gantz are monitoring closely the tremendous efforts by Hamas to stir up violence in the West Bank from its perch in the Gaza Strip, and the relentless attempts by its military wing and its representatives operating in Turkey to rebuild the organization’s military infrastructure in Palestinian West Bank towns and refugee camps. This is one issue that Israel and the PA are in agreement on. Hamas poses a strategic existential threat to the PA and a complex security challenge for the Israel Defense Forces (IDF) and the Shin Bet. A shared enemy facilitates greater cooperation. Gantz and Abbas sought on Dec. 28 to walk together along that path.

Things are hard, Abbas reportedly told Gantz, stating that he remains committed to preserving calm and lowering the level of violence, though this, he noted, is getting harder and harder. Abbas warned against a deterioration of the conflict from a nationally motivated clash between Israelis and Palestinians to a religious one between Jews and Muslims, especially in light of the ongoing friction over Al-Aqsa Mosque. Reports in Israeli media quote Abbas as saying, “If the extremists are successful in turning this into a religious matter, preventing a blow-up will be very difficult.” Still, Abbas reportedly promised to continue doing all he could to avoid such an outcome.

Abbas complained mostly about the controversial settler attempts to rebuild their West Bank Homesh outpost that Israel razed in 2005. Gantz promised to take action, but demanded at the same time tighter coordination between the PA’s security forces and the IDF in order to forestall more violence. The two men agreed on most of the issues they discussed. What remains is to translate their agreement into tangible action.