Clearly it is no coincidence that Israel’s Defense Minister Benny Gantz met in Amman with Jordanian King Abdullah one week only after hosting in his Rosh Ha’ayin home Palestinian President Mahmoud Abbas. 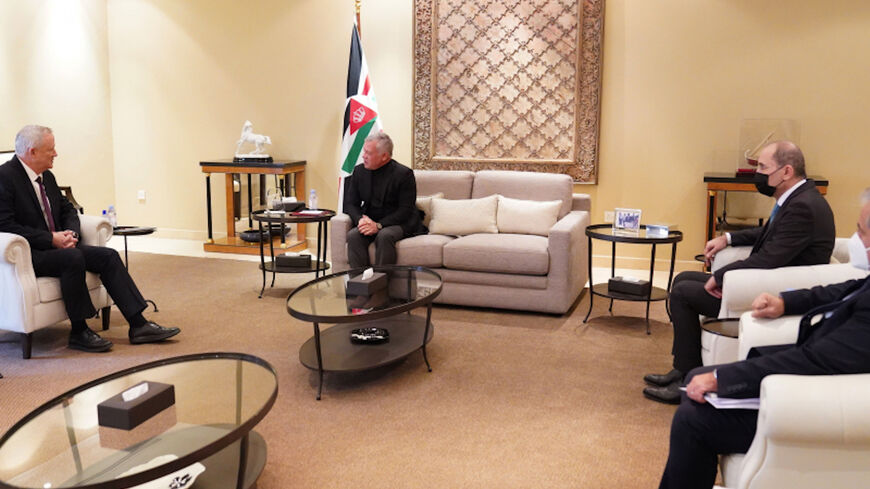 The Jan. 5 meeting between Defense Minister Benny Gantz and Jordanian King Abdullah was not their first meeting. They have known each other for many years and had met in Jordan as recently as last July. Other Israeli leaders have also met with the king in recent months, including Prime Minister Naftali Bennett, President Isaac Herzog and Foreign Minister Yair Lapid.

Still, this was the first time in seven years that the palace in Amman published a picture of the king meeting with an Israeli official. The last time was in 2014, when the king met with then-Prime Minister Benjamin Netanyahu on the backdrop of Israeli-Palestinian talks that were mediated by then-US Secretary of State John Kerry. The Jan. 5 meeting was part of continues efforts by Bennett, Gantz and Lapid to revamp ties between Israel and Jordan, after sour relations during the Netanyahu era.

A statement released by the office of Gantz shortly after the meeting said the two men discussed “the strategic importance of strong and enduring relations between Israel and Jordan, which contribute to the security and prosperity of both nations.” Gantz and Abdullah, it was noted, talked about a number of security and diplomatic issues. The statement continued, “Gantz thanked His Majesty for his leadership and for the Kingdom’s critical role in maintaining regional peace and stability. … Gantz also praised the improved ties between the two countries since Prime Minister Naftali Bennett's government came to power, and expressed his commitment to continuing to strengthen Israel and Jordan's security, economic and civil ties."

Other reports said Abdullah told Gantz he appreciated the Dec. 28 meeting between the minister and Palestinian President Mahmoud Abbas, and considers it an important step in stabilizing the region. As a reminder, the two leaders — Gantz and Abbas — met at the home of Gantz in Rosh Ha’ayin, in a rare encounter on Israeli soil. And while the Gantz-Abbas meeting was reportedly not the trigger for the Jan. 5 meeting in Amman, it certainly facilitated it and encouraged the Jordanians to go public about it, including the picture.

Israeli reports said Jan. 5 that the Palestinian issue and maintaining calm in the West Bank were just one of several diplomatic and security issues discussed at the meeting, which lasted for an hour and a half. Another issue, for instance, was Syria, and the Israeli-Jordanian common interest in avoiding escalation in the region. Reportedly, the Defense Ministry's policy and political-military bureau director, Zohar Palti, told the Jordanians that the Biden administration had promised Jerusalem it will not withdraw its troops from Syria and from Iraq in the near future.

Security cooperation is an important element in bilateral relations and rapprochement between Israel and Jordan, but not the only one. Shortly after taking office, Bennett promised the king that Israel would double the quantity of water it supplies to the Hashemite Kingdom. Then, last November, with the mediation of the United Arab Emirates and US Climate Change Envoy Kerry, the two countries signed an agreement that should help them both to face climate change challenges. The cooperation agreement will see the construction of a solar plant in the Jordanian desert, generating clean power for Israel, in exchange for a desalination plant in Israel that will provide Jordan with water.