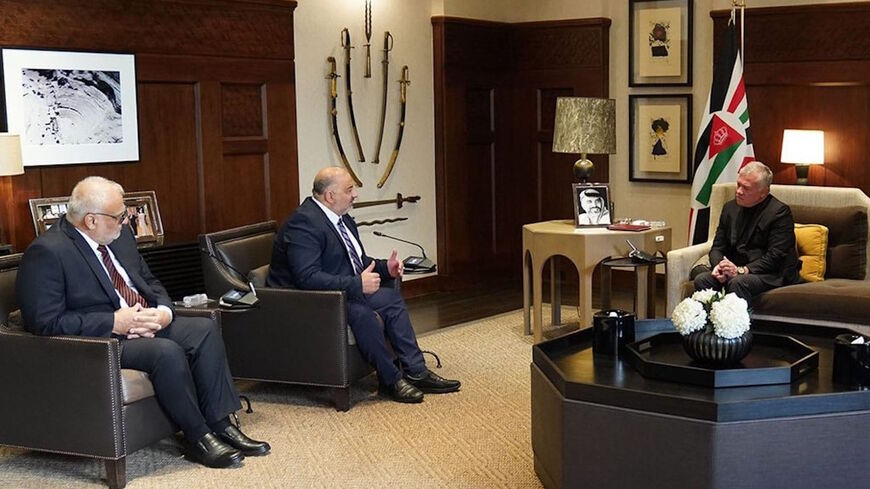 Mansour Abbas, the head of the United Arab Party (Ra'am), meets with King Abdullah of Jordan in Amman, Nov. 9, 2021. - Office of King Abdullah

Ra’am is part of the coalition, and according to Israeli press, Abbas updated both Prime Minister Naftali Bennett and Foreign Minister Yair Lapid ahead of the meeting. Israeli press also said it was the Jordanians who initiated the encounter.

After the meeting, Jordan issued a statement saying the two men discussed “the latest developments in the Palestinian territories and ways to advance the peace process.” The statement further said the king emphasized his support for the Palestinians, and for the creation of a Palestinian state in the framework of a two-state solution, with its capital in eastern Jerusalem.

Abbas reportedly hailed the king for his positions, expressing appreciation for Jordan’s engagement with Arab-Israelis, especially in education and facilitating pilgrimage to Mecca.

The meeting highlights efforts by both Israel and Jordan to mend bilateral ties. Reports claimed that the king had refused in recent years to speak with then-Prime Minister Benjamin Netanyahu on the phone. Defense Minister Benny Gantz did meet secretly with the king in February while serving under Netanyahu, though apparently not with the prime minister’s blessing. Reportedly, Gantz continues his efforts to warm up ties with Jordan, holding the same ministerial position in the current government.

In July, less than a month after the inauguration of the new government, Israeli press reported that Prime Minister Naftali Bennett had secretly met with the Jordanian king the week before. During that meeting, Bennett informed the king that Israel would sell the kingdom twice the quantity of fresh water it usually provides in accordance with the 1994 peace treaty. This offer and other understandings were formalized during a meeting a few days later between Foreign Minister Yair Lapid and his Jordanian counterpart Safadi. Israel’s Energy Minister Karine Elharrar met Oct. 12 with Jordanian Minister of Water and Irrigation Mohammed Al-Najjar, to sign the water agreement.

Also, on Sept. 4, Israel’s President Isaac Herzog revealed he had traveled to Amman for talks with the king. “Jordan is a very important country. I have immense respect for King Abdullah, a great leader and a highly significant regional actor. … There is a sense in the region of a desire to make progress, a desire to speak,” said Herzog.

Netanyahu slammed Abbas’ meeting, tweeting in Hebrew, "Bennett continues to sell out Israel.  Israel’s true Prime Minister Mansour Abbas met today with the King of Jordan. According to the official statement from Jordan: "The two discussed developments in the Palestinian territories, the King of Jordan emphasized his support for the Palestinian brothers in their efforts to obtain their rights."