In their meeting Nov. 3, Economy Minister Orna Barbivai and Jordanian Minister of Industry, Trade and Supply Yousef Alshamali agreed to expand the list of materials and products Jordan could export to the West Bank. 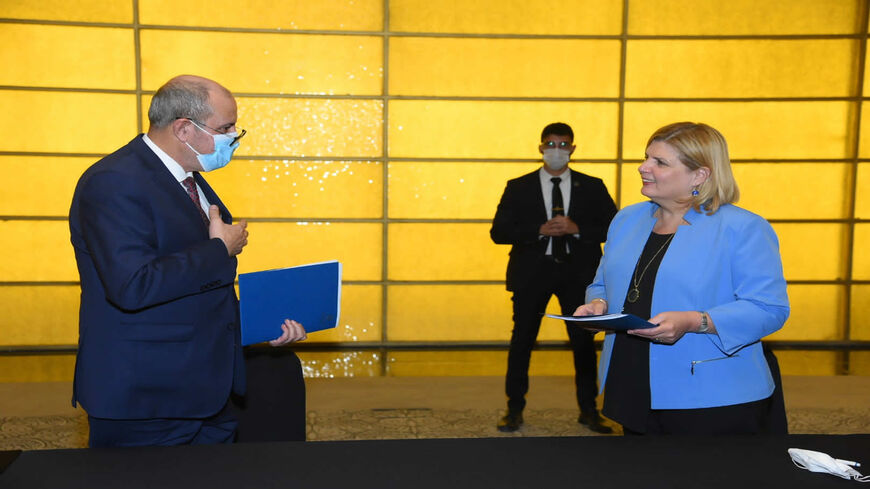 Israeli Economy Minister Orna Barbivai and Jordanian Minister of Industry, Trade and Supply Yousef Alshamali met Nov. 3 in Jordan. Israeli Ambassador to Jordan Eitan Sorkis and Jordanian Ambassador to Israel Rassan al-Majali also participated in the meeting, which was the first of its kind in over a decade.

A statement by Israel said the two ministers discussed a variety of ways to strengthen economic ties between the two countries, highlighting the ongoing efforts at enhancing civilian ties between the neighboring countries and promoting cooperation. More specifically, the ministers discussed the renewal of the trade agreement between the two countries, mutual recognition of standardization, expansion of tourism and other trade-related issues.

Moreover, Barbivai and Alshamali signed at the Nov. 3 meeting an agreement that should expand future caps on products that Jordan may export to the Palestinian Authority (PA) in the West Bank. The idea is to increase the number of Jordanian products making their way into Palestinian areas. The goods and products in question are mainly cement and construction materials, rugs, fabrics, clothing and electronics. Reports say the deal could see exports from Jordan to the PA grow from about $150 million to over $700 million per year. Reportedly, Alshamali had met with his Palestinian counterpart Nov. 2 to discuss the details of the agreement.

The Israeli statement said it recognizes the importance of economic cooperation with Jordan as a strategic goal that is important to regional stability. Barbivai was quoted as saying, "The trade benefits agreed upon today between the Israeli government and Jordan are an important dimension in the strengthening of diplomatic relations between the two countries. Deepening civilian and economic ties contributes to bilateral relations, national security and the protection of Israel's longest and most quiet border."

The new Israel-Jordan agreement corresponds to the 1994 Paris Protocol, which is part of the Oslo Accord between Israel and the Palestinians. This 1994 protocol defines the economic relations between Israel and the Palestinians. It determines tax and trade ties and delineates lists and quotas that in turn enable the PA to establish import policies.

Rehabilitating ties between Israel and Jordan is one of the main diplomatic priorities set by the Bennett government. Bilateral ties had deteriorated under the Netanyahu government over a series of incidents. Reportedly, Jordanian King Abdullah had refused in recent years to dialogue directly with then-Prime Minister Benjamin Netanyahu.

Shortly after his swearing in to office, Prime Minister Naftali Bennett met in Amman with the king, in a secret encounter that was publicized only a week later. At that meeting, Bennett proposed Abdullah to double the amount of fresh water Israel is providing to drought-stricken Jordan, a proposal that was finalized last month by both energy ministers. Energy Minister Karine Elharrar and her Jordanian counterpart Minister of Water and Irrigation Mohammed al-Najjar signed the deal Oct. 12 in Jordan.

In parallel, Foreign Minister Yair Lapid  traveled to Jordan at the beginning of July for a meeting with Jordanian Deputy Prime Minister and Foreign Minister Ayman Safadi. The two had also spoken on the phone several times. Lapid and Safadi signed at that meeting agreements on both trade and water cooperation, cementing the understanding reached days earlier between Bennett and King Abdullah.

Another person involved in warming bilateral ties is Defense Minister Benny Gantz. He has been pushing for warming up relations with Amman already during the last Netanyahu government, meeting secretly with Abdullah on February 2021, in Jordan. Last March, Gantz warned, “The deterioration of relations between Israel and Jordan is very risky. Unfortunately, Netanyahu is not doing enough [to promote relations] as he should.”

The new Israel-Jordan Nov. 3 agreement also corresponds with the policy advanced by Gantz vis-a-vis the Palestinians, since the establishment of the Bennett government, of moves and gestures designed to improve economic conditions of West Bank and Gaza residents. Gantz was the first Bennett government minister to meet in Ramallah with Palestinian President Mahmoud Abbas. A day after their Aug. 29 meeting, Gantz announced that Israel will transfer a $155 million loan to the PA. On Oct. 19, the Defense Ministry announced it had officially legalized the status of some 4,000 Palestinians living in the West Bank.