Israel’s Energy Minister Karin Elharar told Al-Monitor that the agreement she signed today doubling the water quantity supplied to Jordan is a sign of improving diplomatic relations between the two countries. 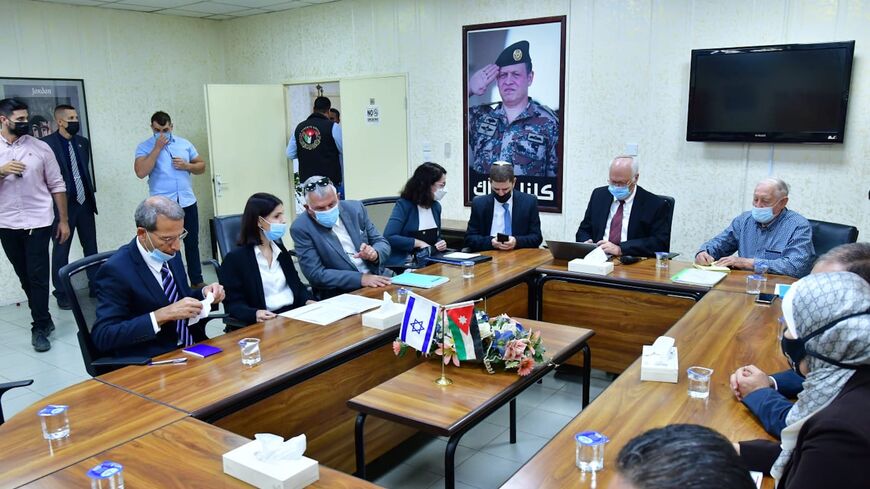 Israel and Jordan agreed today on a plan for Israel to double the quantity of fresh water it provides to the drought-stricken Hashemite Kingdom. Energy Minister Karine Elharrar met her counterpart, Jordanian Minister of Water and Irrigation Mohammed Al-Najjar, to sign the agreement in Jordan. Israel’s Ambassador to Jordan Eitan Surkis, Jordanian Ambassador to Israel Ghassan Al-Majali and the heads of the Israeli and Jordanian water authorities were also present at the signing ceremony.

Elharar told Al-Monitor that head of the Israel Water Authority Giora Shaham negotiated on Israel’s behalf. “This is an issue I’ve been dealing with ever since taking office four months ago. Our objective was clear: to assist our neighbor Jordan in coping with the terrible water shortage and drought distress it is suffering from. Thus, we agreed to double the quantity of water we supply to Jordan annually. The original agreement, anchored in the peace treaty between the two countries, stipulates that Israel will provide Jordan with 50 million cubic meters of water every year. We are doubling it to 100 million cubic meters for this year with an option to continue similarly for the next two years as well.”

Elharar noted that since the two countries signed the peace agreement, there have been very few occasions where senior Israeli officials met with Jordanian counterparts and photos of the event were published. “I believe this agreement that we reached and our meeting today on the ministerial level will enhance bilateral relations,” she said. "In fact, I think that the ceremony in itself and what it represents is already a harbinger for better diplomatic relations."

The Foreign Ministry in Jerusalem stated today that the meeting “highlights the importance of Israel-Jordan ties in strengthening neighborly relations and promoting cooperation among countries of the region, the importance of cooperation on the issue of water as an impetus for promoting further relations between countries and the solidarity that exists between neighbors who are all facing water shortages due to climate change and regional demographics.”

Shaham said at the ceremony, "The professional cooperation between Jordan and Israel within the Joint Water Committee allows us to formulate joint solutions to the challenges of the climate crisis and to strengthen water relations between the two countries on the basis of good neighborliness and professional water management."

The two countries were first reported to be working on a water agreement last July. On July 8, Israeli news outlets reported that Prime Minister Naftali Bennett had secretly met with Jordan's King Abdullah II in his Amman palace the week before. Bennett reportedly informed the king that Israel would agree to sell the kingdom more water than the quota put forth in the 1994 bilateral peace agreement.

In parallel, Foreign Minister Yair Lapid also traveled to Jordan at the beginning of July for a meeting with Jordanian Deputy Prime Minister and Foreign Minister Ayman Safadi. Agreements on both trade and water cooperation were reached, cementing the original agreement reached between Bennett and the king.