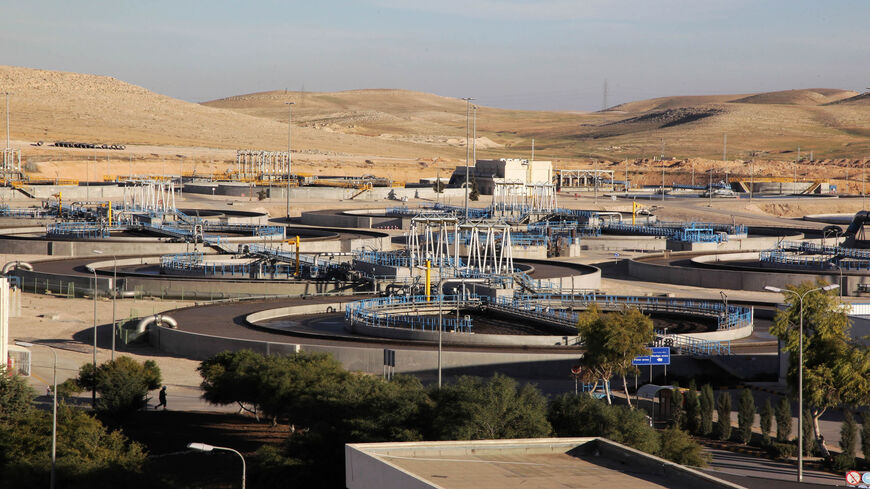 Israeli Energy Minister Karin Elharar criticized Oct. 17 the attack last week by former Prime Minister Benjamin Netanyahu over the new water deal signed between Israel and Jordan. Interviewed by the army radio station, Elharar accused Netanyahu of attempting to damage relations between the two countries. “The leader of the opposition is creating fake news and claiming that we are giving the water for free, which didn’t happen. There are no free gifts, but relations that need to be developed. This is a strategic asset to Israel,” noted Elharar.

Two days before the interview with Elharar, a senior official at the Israeli Foreign Ministry addressed the same issue. Head of the Jordan-Syria-Lebanon department at the Foreign Ministry Liron Zaslansky wrote on Twitter, “We do not give Jordan water for free. The Jordanians pay full price for it. Stability and peace are strategic interests of Israel."

Elharar and Zaslansky were referring to an Oct. 12 tweet by Netanyahu, posted shortly after the signing of a deal that would see the amount of water provided by Israel to Jordan doubled. “Just while Jordan is tightening relations with Iran, [Prime Minister Naftali] Bennett doubled the amount of water that Israel is transferring to Jordan — without Israel getting anything diplomatic in return,” he wrote.

Emphasizing his point on Amman allegedly playing out Jerusalem while strengthening relations with Tehran, Netanyahu accompanied his post by a photo of an article that had just appeared in the Israel Hayom newspaper, which is affiliated with the Israeli right, featuring a photo of Jordanian King Abdullah, with the headline “Double Game?” The article argued that while the Israeli energy minister signed with her Jordanian counterpart the new water deal, Jordanian Foreign Minister Ayman Safadi spoke on the phone with his Iranian counterpart Hossein Amir-Abdollahian, discussing means of developing bilateral ties and a number of regional issues allegedly of common interest.

The political spat between Elharar and Netanyahu over relations with Jordan highlights efforts made by the current government, ever since its inception, to repair ties with Jordan, significantly damaged during the Netanyahu era.

Relations between Jerusalem and Amman experienced several breaking points under the Netanyahu government. One such point was the 2017 stabbing incident, when a guard at the Israeli Embassy killed two Jordanians, apparently fearing that one of them was about to attack him. Amman was especially angry over Netanyahu later receiving in his office the Israeli ambassador and the guard himself. Around the same time, another serious incident took place — this time in Jerusalem. After two Israeli police officers were killed in a terror attack near the Temple Mount, Israel decided to place metal detectors at the entrance of the compound — a decision that generated a very angry reaction by Jordan. Reflecting tense relations, Amman refused in 2019 to renew the 25 year-old Israeli lease on two agriculture lands near the border between the two countries.

Diplomatic tensions only escalated in Netanyahu’s last year in office. In June 2020, after Netanyahu pushed a plan to annex parts of Jewish settlements in the West Bank, King Abdullah refused to take his calls. Reports actually claimed that Netanyahu and Abdullah had spoken only once or twice since they met in June 2018. Tensions reached another low-record point in March this year, when Amman stalled approval for Netanyahu’s plane to cross Jordanian skies. Apparently, Amman was retaliating over an incident that took place the day before on the border between the two countries. Jordanian Prince Hussein bin Abdullah canceled what should have been a historic visit to Jerusalem’s Al-Aqsa Mosque, reportedly over a dispute with Israeli authorities regarding security arrangements for his trip.

When Gabi Ashkenazi was appointed foreign minister in the last Netanyahu government, he took it as a personal mission to repair ties with Jordan. Still, with Netanyahu espousing his own agenda, Ashkenazi could take relations only up to a certain point. Israel’s former Ambassador to Jordan Amir Weissbrod was extremely instrumental in these efforts, and he continued to be so when the Bennett government was established.

Weissbrod’s efforts proved especially successful this summer. At the beginning of July, Israeli press reported that Prime Minister Naftali Bennett had secretly met with Abdullah in his Amman palace, and that he had offered the king to double the amount of water Israel supplies to the kingdom according to the 1994 peace treaty. Defense Minister Benny Gantz, who has also long championed for nurturing ties with Jordan, also met with the king in Amman.

The offer of Bennett was repeated and confirmed in a meeting and in talks between Foreign Minister Yair Lapid and Safadi. As mentioned, the formal signature for the deal took place last week. Shortly after the ceremony, Elharar told Al-Monitor that her ministry had been laboring on the deal ever since she took office, and that she personally considered relations with Jordan a highly important strategic asset of Israel.

Indeed, Israeli leadership is now hoping that the water deal would lead the way for bilateral cooperation projects in fields such as energy and battling climate change. Elharar has several ideas for such projects, as have other Cabinet ministers. With that, they are also hoping that Netanyahu’s recent statement will not jeopardize the advancement already made.