Israel, Jordan relations warm up, but not thanks to Netanyahu 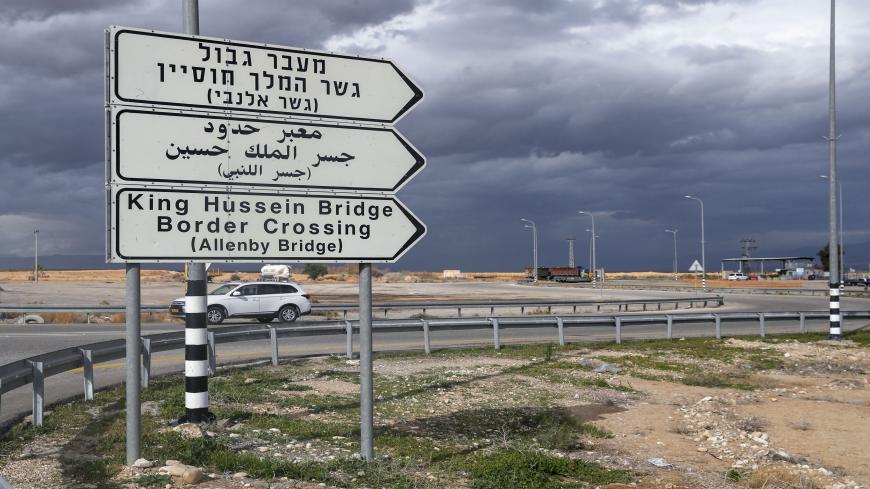 A car drives past a road sign indicating the Allenby Bridge crossing point to Jordan (background), in the city of Jericho, West Bank, Jan. 28, 2021. - Ahmad Gharabli/AFP via Getty Images

According to a Feb. 28 report by Israeli news site Ynet, Defense Minister Benny Gantz had met secretly in Jordan with King Abdullah II. The meeting apparently took place a few weeks ago. The report did not divulge its sources for this information, nor did it give a precise date for the meeting.

“I think Jordan is a great asset to Israel, and I think that our relationship with Jordan could be a thousand times better. Unfortunately, Netanyahu is an unwanted figure in Jordan, and his presence harms [relations between the countries]. I have a continuous and ongoing connection with the Jordanian king and other senior Jordanian officials, and I know we can have great achievements,” Gantz said.

Gantz expressed hope for advancing in strengthening bilateral relations, saying, “I believe that it’s possible to do one or two civilian projects each year with Jordan, and within 10 years up to 20 or 30 projects.”

Gantz’s statements were made against the backdrop of an article by Jordanian Prince Hassan bin Talal, published the same day by Israeli Yedioth Ahronoth newspaper. In the article, the prince called for the establishment of a stable Palestinian state, noting, “Iran and the Israeli Palestinian conflict, the twin elephants in the room, must be at the top of the agenda.” Still, Talal also referred extensively to advancing economic joint projects in the fields of energy, water and the environment, and called for promoting ties between civil societies in the region.

The issue of the two-state solution was addressed in a Feb. 25 speech by the king, addressing the Brookings Institution Conference titled "The Middle East and the New US Administration." “There is no alternative to the two-state solution, and continued unilateral steps will only kill the prospects of peace,” Jordanian monarch said.

Clearly, the arrival of the Biden administration, with its stated intention to revive Israeli-Palestinian talks, affects posivitely also diplomatic and economic ties between Amman and Jerusalem.

On Feb. 25, Israel’s public broadcaster Kan reported about the two countries advancing joint projects and improving bilateral relations. Kan Arab affairs correspondent Roi Kais revealed that a few weeks ago, government ministries' CEOs from both countries met in order to advance bilateral projects, and even trilateral projects with the Palestinian Authority (PA). Reportedly, Jordan would like to increase exports to the PA from $100 million to $500 million, a request favorably being considered now by the Israeli authorities. A list of products and merchandise that could be exported from Jordan to the West Bank was submitted in that meeting to the Israeli delegation, headed by the Israeli Foreign Ministry.

To these developments, we should add two face-to-face meetings over the past few months between Foreign Minister Gabi Ashkenazi and his Jordanian counterpart Ayman Safadi. One meeting took place Dec. 3 at the Allenby Bridge crossing point on the Israel-Jordan border. This meeting occurred at the request of the Jordanians, to discuss several practical issues, such as the renewal of Jordanian export permits to the PA and increasing the number of Palestinians authorized to pass at the Allenby Bridge. Reportedly, Safadi brought up Jordan’s special status in Jerusalem and the Temple Mount, and asked Israel to refrain from any bilateral moves that could block advancement toward the two-state solution. Another meeting took place two weeks later, in Jordan, to discuss regional strategic issues and economic cooperation.

Recent statements by US Secretary of State Antony Blinken over Washington’s commitment to the two-state solution obviously encourage Amman, and could very well be at the source of its willingness to thaw its chilly relations with Jerusalem. Still, signs of rapprochement between the two countries were registered already prior to the US elections and Joe Biden’s victory. Sources at the Foreign Ministry indicate that Ashkenazi has spoken with Safadi several times on the phone since taking office. Also, last October, Israeli and Jordanian civil aviation authorities signed a new aviation agreement that enables commercial flights to cross the airspace of both countries.

Other signs of rapprochement were registered at the beginning of the coronavirus pandemic. In March 2020, Israel facilitated the passage of some 200 Israeli-Arab university students studying in Amman back to the country, after the Hashemite Kingdom closed its borders. Then in April 2020, Israel donated to Jordan 5,000 surgical masks. On Jan. 25, the Israeli Embassy in Amman posted on its site that Jordanian authorities have agreed for Israeli citizens to cross the border back into Israel through the Jordan River crossing point, without submitting prior notice or notifying ahead the Foreign Ministry.

As demonstrated earlier, this process of rapprochement is championed by Ashkenazi and Gantz. Publications over the past two years have suggested that relations between King Abdullah and Netanyahu are chilly at best. In June 2020, on the backdrop of Netanyahu’s push for annexing parts of the West Bank, the king reportedly refused to speak on the phone with the prime minister.

The problem is that Gantz and Ashkenazi are unlikely to be part of the next government. In fact, Ashkenazi has already said that he is taking a break from politics. Israel’s embassy in Jordan is headed by one of the country’s most professional, experienced and discrete diplomats — Ambassador Amir Weissbrod. This capable ambassador should certainly get much of the credit for this positive change in relations, especially since he was appointed at a record-low point in bilateral ties. Still, people in the Foreign Ministry fear for the future of these ties. Much will depend on the identity of Israel’s next foreign minister.