Prime Minister Benjamin Netanyahu said he was forced to postpone today's trip to the United Arab Emirates when Jordan dragged its feet on approval to cross its skies. 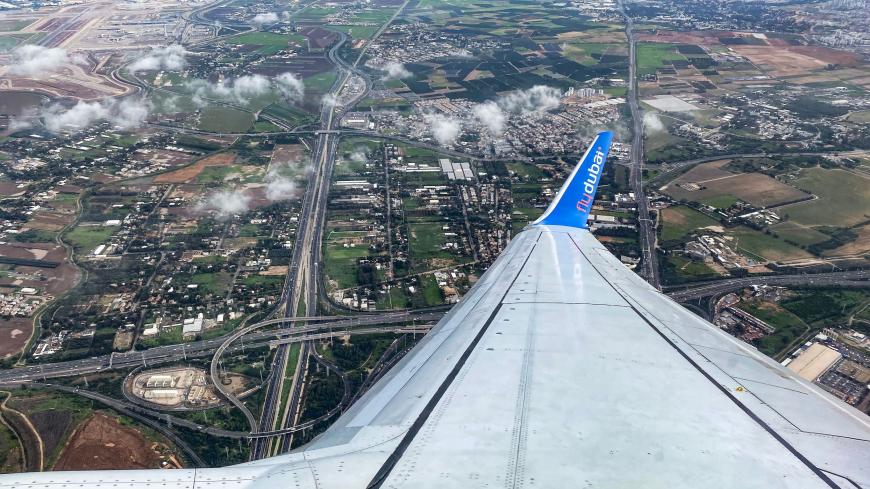 This picture taken on Dec. 16, 2020, shows a view above Israel from the window of a plane aboard a Flydubai flight from Ben Gurion International Airport to Dubai upon departure. - AHMAD GHARABLI/AFP via Getty Images

Prime Minister Benjamin Netanyahu canceled his trip to the United Arab Emirates this morning shortly before he was due to depart. Israeli officials first said there were two reasons for postponing the trip — the prime minister’s wife Sara's hospitalization yesterday with appendicitis and Jordan’s delay in approving Netanyahu’s flight path over Jordanian skies en route to Abu Dhabi.

A statement from Netanyahu's office mentioned only the second reason, saying Amman was retaliating for the cancelation yesterday of a visit by Jordanian Crown Prince Hussein bin Abdullah to Al-Aqsa Mosque at the Temple Mount.

Netanyahu’s visit “was postponed due to difficulties in coordinating his flight in Jordanian airspace. These difficulties apparently stemmed from the cancellation of the Jordanian crown prince’s visit to the Temple Mount due to a disagreement over security procedures at the site.” The prime minister’s office added that eventually Jordan agreed for Netanyahu’s flight to use Jordanian airspace, but due to the delay the prime minister and Emirati Crown Prince Sheikh Mohammed bin Zayed agreed to reschedule the visit.

Israeli reports claimed that the visit of the Jordanian crown prince had been coordinated with Israeli security well ahead of time. However, the prince arrived at the Allenby Bridge border crossing with more armed guards than had been agreed upon. Israel refused to let the additional guards enter and Hussein canceled his visit. Other reports said the dispute between the security teams erupted before the crown prince arrived to the crossing point and that Israel had blocked certain roads in preparation for the prince's convoy and that two buses carrying the prince's staff arrived to Jerusalem before the incident.

Reacting to the affair, Jordanian Foreign Minister Ayman al-Safadi said, “At the last minute Israel wanted to impose new things and change the plans so that they would limit Muslims [visiting the Temple Mount] … The crown prince canceled his visit out of respect for the worshippers.’’

Safadi added, “Al-Aqsa Mosque and all of its territory are a place of worship for Muslims. There is no Israeli sovereignty over it. It is in occupied Jerusalem. We will not accept any Israeli intervention in its matters.”

Safadi also said that peace would be difficult to achieve as long as Israel flaunts international law. He called to halt the construction of any new settlements and any actions that could hurt the holy sites in Jerusalem.

Reports late February claimed Defense Minister Benny Gantz had visited Jordan and met with King Abdullah II. On Feb. 26, Gantz hinted of contacts with Jordan, and blamed Netanyahu for sabotaging bilateral relations. “I think Jordan is a great asset to Israel, and I think that our relationship with Jordan could be a thousand times better. Unfortunately, Netanyahu is an unwanted figure in Jordan, and his presence harms [relations between the countries],” Gantz said.

Tweeting after Safadi's statement, Gantz said, “Jordan is Israel's strategic partner and our security and political relations are a cornerstone of our national security concept. … Unfortunately, in his conduct in recent years, Netanyahu has severely damaged relations with Jordan, which led to the loss of significant assets for the State of Israel — security, political and economic. I personally and the entire defense establishment will continue to work to strengthen relations with Jordan at all levels.’’

Earlier today, Israel’s ambassador to Amman, Amir Weissbrod, posted a video showing himself voting early in the Israeli general elections and explaining the process in Arabic. Weissbrod expressed excitement at voting at an Israeli embassy in an Arab country.

The experienced diplomat took the position in 2018, a low point in diplomatic relations, and established fruitful contacts with his Jordanian interlocutors. Yesterday's two incidents and today only add to his already complicated mission of restoring bilateral ties.