Israeli Prime Minister Benjamin Netanyahu keeps insisting that all is fine with Jordan. 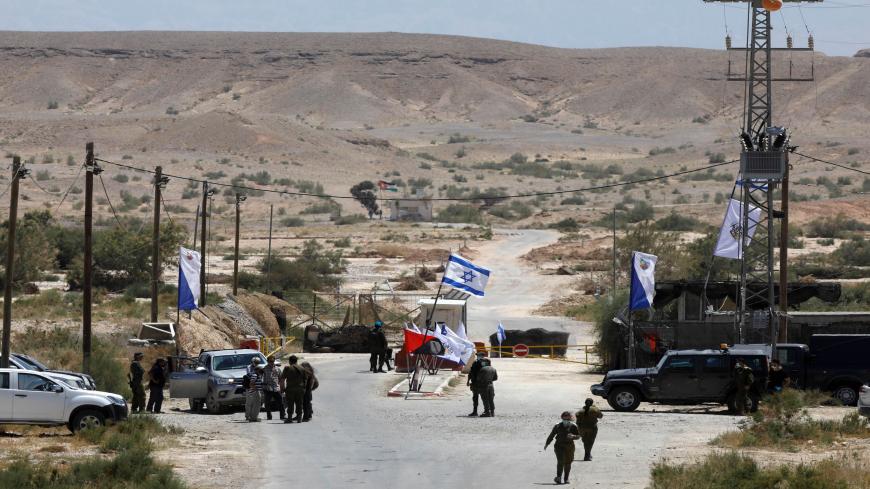 Israeli soldiers gather at the Wadi Araba crossing checkpoint on the Israeli-Jordanian border near Moshav Tsofar in the Arava Valley, south of the Dead Sea basin, April 30, 2020. - Menahem Kahana/AFP via Getty Image

The current diplomatic crisis between the two countries erupted March 10, when several bodyguards of Jordanian Crown Prince Hussein bin Abdullah were refused entry to Israel. The prince was planning to visit the Temple Mount compound and pray at Al-Aqsa Mosque. Israel claims that the detail of the prince was larger than what was agreed upon beforehand. After a dispute erupted between the teams of both sides, the prince decided to cancel his visit.

The day after, Jordan took its time approving for the airplane that was scheduled to carry Netanyahu to the United Arab Emirates to pass thought its airspace. The Jordanians agreed in the end, but it was too late, and  Netanyahu had to cancel his visit. Israeli sources said that the Jordanian move came as retaliation to the crown prince incident the day before.

Asked March 13 why he didn't choose a different flight path that didn't enter Jordanian airspace, Netanyahu simply said, "We had some issues a week ago over Saudi Arabia, missiles that were there. I don’t want to get into that.” Apparently, Netanyahu referred to the threat of the Iranian-backed Houthis targeting the jet.

On March 12, Israel’s Cabinet approved for 700 Jordanians to enter the country to work in the Eilat hotel industry. Due to the coronavirus pandemic, the Wadi Araba crossing point between the two countries, located in the south of Israel, has been closed for civilian movement.

This recent Cabinet move is being considered as an attempt by Israel to send positive signals to Amman after rising tensions, though it is also related to the upcoming Passover holiday at the beginning of April. As Israel starts emerging from a nationwide lockdown and coronavirus restrictions are being lifted, hotels in Eilat have demanded the government to enable Jordanian workers to return. They are expecting many Israeli tourists during the Passover vacation.

Still, contrary to Netanyahu’s soothing tone on March 13 and the decision in regard to the Jordanian laborers on March 12, Ben Caspit wrote March 13 that the prime minister’s office had ordered March 11, right after the Jordanian air passing refusal, to block Israeli airspace to Jordanian civil flights. According to Caspit’s exposure, officials in the aviation authority had tried disputing the order, pointing out its absurdity and significant implications. Reportedly, it was only long minutes after that the Ministry of Transportation and Road Safety retracted it.

Oded Eran, a former Israeli ambassador to Jordan, criticized Netanyahu’s handling of the crisis, stating, “The major problem is that there is no dialogue between the No. 1’s, that is the prime minister and the king of Jordan.” Eran noted there is a lack of trust between the leadership, especially on the backdrop of Netanyahu’s plans last year to advance annexation of parts of the West Bank. The two leaders did not meet in person for the last three years. Last June, King Abdullah refused to take a call by the Israeli prime minister because of the annexation plan.