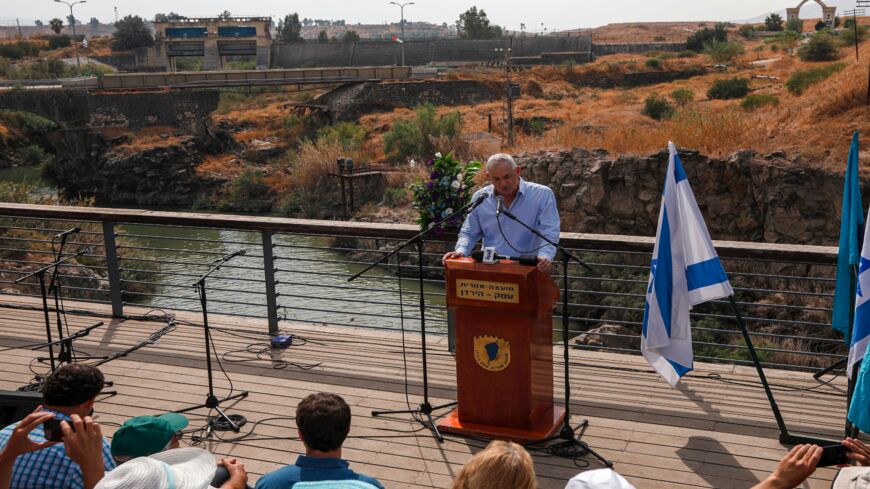 Retired Israeli Gen. Benny Gantz, one of the leaders of the Blue and White (Kahol Lavan) political alliance, speaks at the Jordan Valley site of Naharayim, also known as Baqura in Jordan, east of the Jordan River and which has been leased to Israel as part of the Israel-Jordan peace treaty, on Oct. 18, 2019. - JALAA MAREY/AFP via Getty Images

Israel’s embassy in Amman yesterday congratulated Jordanians and King Abdullah II on the occasion of 100 years since the founding of their state. A post on the embassy’s official Facebook page said, "The Hashemite Kingdom of Jordan, under the leadership of King Abdullah II, is a key player in the region and a key and strategic partner of Israel, promoting values of peace, moderation and tolerance. We wish The Hashemite Kingdom of Jordan a prosperous future and will continue to promote our bilateral relations in various fields for the benefit of both of our peoples."

The Israeli post comes as the king and Prince Hamzah feature reconciliation. Jerusalem had hesitated on how to react to developments in Jordan in recent days, with some senior officials calling to express support of the king. It was finally Defense Minister Benny Gantz who set the tone, referring to the Hamzah affair as an internal Jordanian topic while pointing out the strong bilateral security contacts. "A strong and flourishing Jordan is a security and economic interest for us, and we need to do what we can to help them. But as I said, regarding the internal developments there, that’s an internal issue," said Gantz.

Speaking with reporters, Gantz said, “Jordan is a peaceful neighbor with extraordinary strategic importance. We will do what is necessary to maintain that relationship, which has lasted some 30 years.” Gantz also referred to difficulties Jordan was facing in curbing the spread of the coronavirus. “We will do whatever is needed to assist them economically and in terms of health to help them get through the challenges they are facing. This is not only my decision, but I hope one made by the Prime Minister’s Office and the National Security Council,” said Gantz.

Gantz’s positive statements come as relations between Jerusalem and Amman keep deteriorating. Reports last month said Netanyahu has been delaying approval of a Jordanian request for water. The 1994 peace treaty stipulates Israel should transfer to Jordan certain amounts of water each month. A joint Israeli-Jordanian water committee is in charge of this issue. Over the past years, almost all of the Jordanian requests for enlarging water quotas were approved without any problem.

In a report at the end of March, Haaretz newspaper claimed Jordan had requested through this committee to alleviate water shortages that month. Reportedly, Netanyahu and the National Security Council have delayed responding to the request in an apparent attempt to refuse it. The report further noted that Netanyahu did not include Jordan in his list of 20 countries to receive coronavirus vaccine donations from Israel, though Jordan is in dire need of that.

The water issue is crucial for Jordan. Reports at the beginning of April said Jordanian Foreign Minister Ayman al-Safadi had raised the issue with US Deputy Assistant Secretary of State Hady Amr. The issue was then raised in a phone call between Secretary of State Anthony Blinken and Foreign Minister Gabi Ashkenazi. Reports say Blinken complimented Ashkenazi for his efforts to improve relations with Jordan but asked why Israel had not approved the Jordanian request for more water. It was only today, after continued pressure from Jordan and from the United States and from Israeli security officials, that Netanyahu approved the request.

Analysts in Israel estimate these moves by Netanyahu came in reaction to the March 11 incident, where Amman delayed its approval for the prime minister to fly over Jordanian airspace — a delay that resulted in Netanyahu canceling his much expected first visit to the United Arab Emirates. Amman did hide the fact that the delay in approval came as retribution over an incident a day earlier when several bodyguards of Jordanian Crown Prince Hussein bin Abdullah were refused entry to Israel. After a dispute erupted between the teams of both sides, the prince decided to cancel his visit to the Jerusalem Al-Aqsa Mosque.

Following this double diplomatic incident, Netanyahu insisted that bilateral relations were good and back on track. Still, the water incident hints otherwise. Clearly, Gantz wishes to distance himself from the tit-for-tat game played by Netanyahu vis-a-vis Amman. The same could be said about Foreign Minister Gabi Ashkenazi. Since taking office in May last year, Ashkenazi had met and spoken on the phone several times with his Jordanian counterpart, Ayman al-Safadi. Credit should also be given to Israel’s experienced ambassador to Jordan, Amir Weissbrod, doing his utmost to preserve and nourish these fragile relations.

To this list of sensitive bilateral issues, we should also add Jerusalem and the Temple Mount/Al-Aqsa Mosque compound. On April 1, Jordan officially protested to Israel over the many Jewish pilgrims visiting the compound during the Passover holiday. Then, on April 3, the Jordanian government approved enlarging the Jerusalem Waqf, which serves as custodian for the holy Muslim sites in the city, from 18 to 23 members, increasing the representation of Jordanians compared with Palestinians. Jerusalem estimates these moves reflect concerns in Amman over Israel enabling greater involvement of the Palestinians or the Saudis in the running of the Jerusalem Muslim sites.