King Abdullah II has had enough of Benyamin Netanyahu's provocations over custodianship over Al-Aqsa Mosque and has retaliated by scuttling the Israeli premier's so-called historic trip to the UAE when Israel botched his son's visit to Jerusalem. Now Jordan-Israel ties have reached a new low as Netanyahu battles for his political survival in next week's elections. 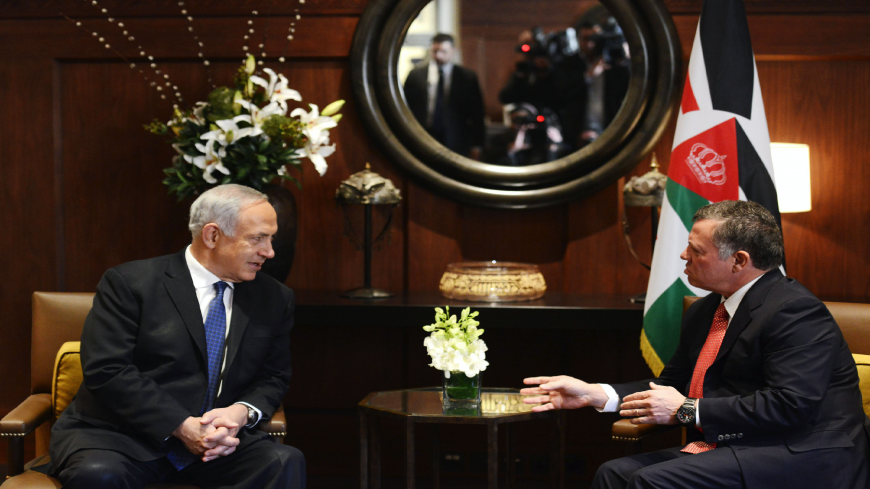 Almost a decade of the tumultuous relationship between Jordan’s King Abdullah II and Israel’s Prime Minister Benyamin Netanyahu finally boiled over last week when Amman scuttled what was to be a historic visit by the Israeli premier to the United Arab Emirates (UAE).

On March 10, Jordan’s Crown Prince Hussein had to cancel a pre-arranged trip at the last minute to East Jerusalem’s Al-Haram Al-Sharif (what Israel calls the Temple Mount) when Israel, according to Jordan, violated the visit’s protocols. Israel had claimed that the cancellation of the trip was the result of disagreements over security arrangements to protect the Jordanian royal, which Jordan had denied.

Jordan’s Foreign Minister Ayman Al-Safadi told the media on March 11 that Israel “tried to impose complications to hinder Jerusalemites’ entry to the mosque,” adding, “We agreed with Israel on arrangements of the visit, and we were surprised at the last moment that Israel wanted to impose new arrangements and change the itinerary.”

The prince wanted to visit Al-Aqsa Mosque to mark a Muslim holy celebration. He was also supposed to visit Christian churches in the Holy City. For Jordan, that would have been a historic visit too: the first by a Jordanian royal since Jordan and Israel signed a peace treaty in 1994. Al-Monitor has learned that Abdullah, who apparently has had enough of Netanyahu’s attempts to challenge the king’s role over Muslim holy places in Al-Haram Al-Sharif and provoke the Jordanians, was so angry that he ordered the government not to grant Netanyahu permission to come to Amman and board a UAE private jet that was sent to him to take him to Abu Dhabi on March 11. When the approval had finally come, hours later, Netanyahu’s plan for a short visit to Abu Dhabi, where he was supposed to meet Crown Prince Mohammad Bin Zayed, had been ruined.

Later on that day, Safadi told CNN that Amman was angry, and how could Netanyahu — who disrupted a religious and peaceful visit by the crown prince to Al-Aqsa Mosque — expect to come to Jordan and fly out of Jordan?

It was an equally calculated response by the Jordanians that hit Netanyahu where it really hurts: his re-election bid next week. “If Netanyahu thought he could take a victory lap by flying to the UAE to mark the exchange of diplomatic ties between the two countries at the expense of Amman, then he had another thing coming,” a well-informed source close to the government, who requested anonymity, told Al-Monitor.

At the crux of the matter is the issue of the Hashemites’ custodianship of Muslim holy places in East Jerusalem. Netanyahu wanted to make that custodianship an election issue to woo far-right Jewish voters 10 days before Israel goes into its fourth election in two years. This would not be the first time that he had tried to challenge Jordan’s special role and provoke the king.

For Jordan, there is no legal or political case for Israel to be made. That special role is enshrined in the 1994 peace treaty and has been reaffirmed after then-US Secretary of State John Kerry mediated between the two countries in 2014. That understanding “reaffirmed commitment to the status quo at Al Haram Al Sharif/Temple Mount compound,” and recognized again Jordan’s custodianship of the compound.

But soon after, Netanyahu reneged on his promises again by allowing Israeli officials and extremist Jewish groups to enter the compound and perform prayers there. The occasional incursions have become regular since 2014 despite continued Jordanian diplomatic protests. Some of these groups, which openly support Netanyahu, declare openly that they seek to destroy Al-Aqsa Mosque and build a Jewish temple on its ruins.

Jordan’s custodianship is not being disputed or contested by any third party. It has been supported by the Arab League and recognized by the Palestinian Authority and the Muslim and international community. But Jordan’s refusal to accept Donald Trump’s decision to relocate the US Embassy to Jerusalem and recognize a united Jerusalem under Israeli sovereignty has irked Netanyahu and senior White House officials. Even more, when Netanyahu threatened to go ahead with the unilateral annexation of major parts of the West Bank, the king threatened that such a move would have a dire effect on the peace treaty.

It is no secret that Abdullah has long distrusted Netanyahu. Multiple sources confirm that the king had rejected many attempts by Netanyahu to meet and refused to take his calls since the Israeli premier reneged on a promise to put on trial an Israeli diplomat who killed two Jordanians at the Israeli Embassy compound in Amman in 2017.

Abdullah has angered Netanyahu by meeting secretly with Defense Minister Benny Gantz last February. Gantz, a rival of Netanyahu, lashed out at his boss on March 11 when he said the conduct of Netanyahu in recent years has severely harmed Israel's relations with Jordan. He tweeted: “Jordan is a strategic partner of Israel. Our defense and diplomatic ties are a foundation stone in our national security outlook.” A number of Israeli security officials have warned against harming Israel-Jordan ties.

With Netanyahu’s political fate hanging in the balance, it is difficult to say where ties with Jordan are heading. The anonymous source has confirmed that the Joe Biden White House had prior knowledge of the royal visit to Jerusalem. He added that the issue of Jordan’s special role over Al-Haram Al-Sharif will feature again when the king visits Washington in the coming weeks.