Relations between Jordan and Israel deteriorated dramatically under outgoing Prime Minister Benjamin Netanyahu, and rebuilding them won't be easy. 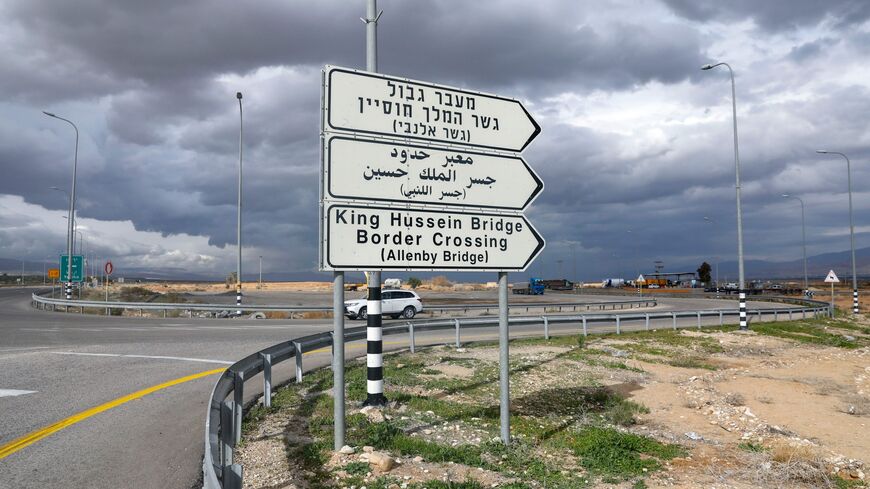 What direction will Jordanian-Israeli relations take under the Bennett-Lapid government? Here, a car drives past a road signal indicating the Allenby (King Hussein) bridge crossing point to Jordan (background), in the city of Jericho in the occupied West Bank, on Jan. 28, 2021. - AHMAD GHARABLI/AFP via Getty Images

Jordan is yet to react to the June 13 formation of a new Israeli government that ended Benyamin’s Netanyahu’s 12-year hold on power. Under Netanyahu, relations between the two neighbors, who had signed a peace treaty 26 years ago, had dipped to their worst level. The decline was not restricted to political issues but economic areas as well. It was no secret that King Abdullah had lost trust in Netanyahu who, in Amman’s view, violated every agreement and understanding reached with Jordan over the years.

But Amman is yet to comment on the swearing-in of a new coalition government headed, for now, by right-wing politician Naftali Bennett. While his coalition includes leftist and centrist parties, including one representing Palestinian citizens of Israel for the first time, Bennett’s political background and his right-wing ideology are seen by observers here as potentially even worse than those of Netanyahu, especially when it comes to the building of settlements in occupied East Jerusalem and the West Bank and the new prime minister's public rejection of the two-state solution.

Newly appointed Foreign Minister Yair Lapid, also the alternate prime minister under his agreement with Bennett, called his Egyptian counterpart, Sameh Shoukry, on June 18, and discussed the importance of relations between the countries on both the political and security level and decided to stay in continuous contact, cooperate and to meet soon. No such call was made with Jordanian Foreign Minister Ayman Safadi. Lapid plans to travel to the United Arab Emirates on his first visit to an Arab country.

But while Jordan did not comment on Netanyahu’s departure and the formation of a new government, its Foreign Ministry was quick to denounce Israeli forces' attack on worshippers at the Al-Aqsa Mosque compound June 18. Foreign Ministry spokesman Daifallah al-Fayez described the attack as “a flagrant violation of the sanctity of Al-Aqsa Mosque and the safety of worshippers,” and called on the Israeli occupation authorities to respect the historical and legal status quo, the sanctity of the mosque, the safety and freedom of worshippers and the authority of the Jordan-affiliated Jerusalem and Aqsa Mosque Affairs Department, which is the “sole body authorized to administer the affairs of Al-Haram Al-Sharif.”

Al-Aqsa Mosque has been at the center of diplomatic friction between Jordan and Israel for years. Abdullah rejected President Donald Trump’s recognition of Jerusalem, including its eastern part, as the capital of Israel in 2017. The king also refused to embrace Trump’s Middle East peace plan, unveiled in the White House early last year; Albdullah continued to maintain his position that the only path to peace is by implementing the two-state solution.

The king went as far as to say that the peace treaty with Israel would be affected if Netanyahu carried out his threat to annex parts of the West Bank, including the Jordan Valley, last summer. Relations soured further earlier this year when Amman retaliated against Israel for essentially preventing the Jordanian crown prince from visiting Al-Aqsa Mosque by denying landing rights to Netanyahu’s plane, which was en route to taking the Israeli prime minister to Abu Dhabi in the closing days of Israel’s election campaign.

But while Netanyahu sought to undermine Jordan’s role in the peace process, his coalition partners, Defense Minister Benny Gantz and Foreign Minister Gabi Ashkenazi tried to assure Amman of the importance of maintaining strong bilateral ties, The Jerusalem Post said in a June 14 article. The writer, Seth J. Frantzman, wrote that in the view of the far right in Israel, Jordan has always been dismissed, or at worst, rightists have argued in favor of designating Jordan as “Palestine.” Aware of this existential threat, Abdullah reiterated last year that Jordan will never be an alternative homeland for the Palestinians. Frantzman called on the new Israeli government "to re-write that dismissive attitude and hold more public meetings with the kingdom."

Adding to the tenuous ties between Israel and Jordan under Netanyahu are the recent revelations by Washington Post columnist, David Ignatius, that the Israeli prime minister was involved in a scheme concocted by Trump son-in-law Jared Kushner to “weaken Jordan’s position and the king’s position on Palestine and the Hashemite Custodianship of Islamic and Christian holy sites in Jerusalem.” This would involve using a former senior aide to the king, Bassem Awadallah, who was allegedly conspiring with Jordan’s former crown prince and also Abdullah's half brother, Prince Hamzah. This became the “seditious plot” involving Awadallah and a cousin of the king whose trial began in Amman on June 21.

In his article June 11, Ignatius claimed that representatives of Israel’s intelligence and security services, Mossad and Shin Bet, sent private messages to the Jordanian monarch, disavowing any role in the alleged plot. The gist, according to a former US intelligence official who has read the messages, was, “This is not us. It’s coming from in front of us” — presumably meaning Netanyahu. The objective of the alleged plot was to undermine Abdullah’s position for his role in rejecting Trump’s “deal of the century.”

Judging from his earlier statements during the Israeli election campaign in March, Gantz will play a role in the new Israeli government to “normalize” relations with Jordan. Despite his tense relations with Netanyahu, Gantz made a secret visit to Amman in early 2021 to reassure the king. Gantz reportedly said during a Zoom meeting with other Blue and White party members, “I think Jordan is a great asset to Israel and I think that our relationship with Jordan could be 1,000 times better.” He added, “Unfortunately, Netanyahu is an unwanted figure in Jordan, and his presence harms the advancement of relations.”

But despite having some allies in the new Israeli government, Amman is wary that the nuts-and-bolts issues — Jerusalem, the Al-Aqsa Mosque and settlement building — will continue to hamper good relations.

Political commentator Orieb al-Rintawi, the head of the Jerusalem Center for Political Studies in Amman, told Al-Monitor that the least of Jordan’s problems was the absence of good chemistry between the king and the outgoing prime minister. “With Bennett the issues will be more difficult, for he will move on with the ‘deal of the century’ by expanding settlements, annexing parts of the West Bank and displacing Palestinians, especially in East Jerusalem,” Rintawi said. “Jerusalem and Jordan’s custodianship of holy sites there are all threatened when you consider that 72 of the 120 members in the Knesset belong to the extreme right, so one can assume that there will be no Palestinian state and no peace process under Bennett.”

But political commentator Labib Kamhawi said he believes that with Netanyahu gone, Jordan and Israel can have a semblance of normal ties. He told Al-Monitor, “Netanyahu made clashes with Jordan a personal issue, but under the new government and in spite of its ideological background we can expect a new phase that could witness cooperation in economic and development areas such as water, which Jordan needs badly.”