King Abdullah II will be the first Arab leader to meet with US President Joe Biden on July 19. 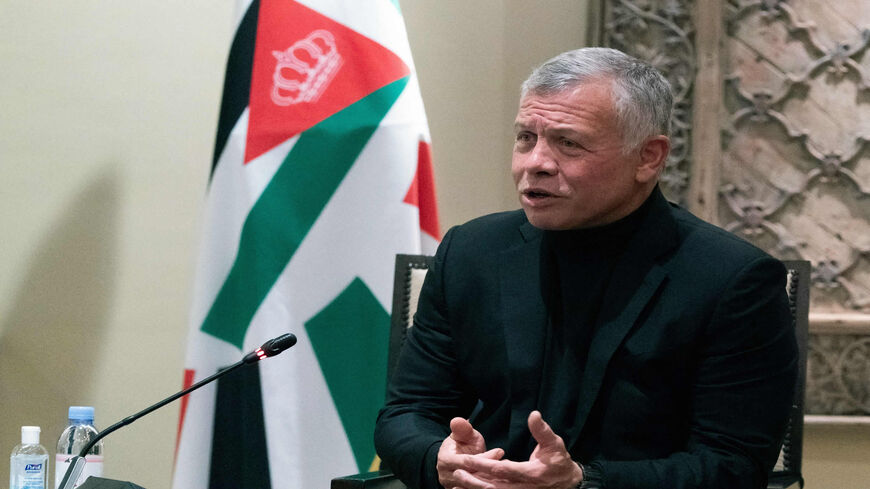 Jordan and Israel, with US backing, are looking to reset bilateral ties after more than a decade of a roller-coaster diplomatic ride that saw relations, under former Israeli Prime Minister Benjamin Netanyahu, reach rock-bottom levels. But even as a new coalition government took over in Israel June 13, it took the new premier, Naftali Bennett, almost a month to reach out to Jordan's King Abdullah.

According to Israeli media, Bennett paid a secret visit to Amman in the first week of July — a specific date was not mentioned — that would have made it the first meeting between the king and an Israeli prime minister in three years.

The Jordanian side neither confirmed nor denied the report. But according to Walla news site, which first reported the meeting, Bennett and Abdullah agreed to open a new page in relations and return to normal dialogue between the parties. That encounter paved the way for a meeting July 8 between Jordan’s Foreign Minister Ayman Safadi and his Israeli counterpart Yair Lapid on the Jordanian side of the border. The men sealed an agreement under which Israel would sell Jordan an additional 50 million cubic meters of water this summer. Israel gives the kingdom 30 million cubic meters annually under the 1994 peace treaty.

They also agreed to boost Jordan’s exports to the West Bank from $160 million to $700 million annually. The sale of the additional quantity of water was initially approved by Netanyahu, but only after the intervention of the new US administration.

Jordan is witnessing a severe water crisis this year due to a poor rainy season. Earlier this year, Jordan had to scrap a bilateral project with Israel to build a water conveyance system linking the Red Sea to the Dead Sea. The project would have supplied electricity and desalinated water to both sides. The deal was agreed to, under Netanyahu, back in 2013, but strained ties between the two countries had finally derailed the project. Jordan is now looking into other solutions including building a water desalination station at the Red Sea port of Aqaba.

On July 10, the Royal Court announced that the king received a phone call from newly elected Israeli President Isaac Herzog, and stressed the importance of working toward just and comprehensive peace on the basis of the two-state solution.

Since he formed his first government in 1996, Netanyahu, who opposed the Oslo Accord between Israel and the Palestinians, had underestimated ties with Israel’s closest neighbor, Jordan, with which Israel shares a 360-kilometer (224-mile) border. While there was no personal chemistry between the king and Netanyahu, Jordan and Israel continued to work closely at the security, military, intelligence and counterterrorism levels.

Netanyahu policies were anathema to Jordan for he stood against everything the king believed in, particularly in relation to finding an equitable solution to the Palestinian issue. Netanyahu was categorically opposed to the two-state solution, freezing or dismantling illegal settlements in the West Bank and East Jerusalem, and to the Arab Peace Initiative of 2002 that offered Israel normalization with the Arab countries but only under the land-for-peace formula.

Netanyahu, who rode the wave of a growing Jewish settler movement, believed in an alternative peace in return for a peace deal. He also believed that he could woo Gulf countries as allies to confront one common enemy — a nuclear Iran. Under former US President Barack Obama that vision could never materialize. But things changed when Donald Trump was elected president in 2015.

Trump’s top Middle East team embraced Netanyahu’s vision, further marginalizing the Palestinian Authority and Jordan. Trump’s promise to present an ultimate peace deal that would see normalization between Arab states and Israel further emboldened Netanyahu to challenge Abdullah, who saw his country as a gateway and conduit between Israel and the Gulf countries.

The king opposed Trump’s unilateral recognition of Jerusalem as Israel’s capital and ignored his peace plan unveiled at the White House in January 2020. Meanwhile, Jordan and Israel sparred repeatedly over almost daily Jewish incursions of Al-Aqsa Mosque in East Jerusalem over which the king has a special role as guardian. Netanyahu broke every promise he made to the king on maintaining the status quo of Al-Aqsa Mosque pushing ties to the brink earlier this year when Jordan denied Netanyahu permission to fly over Jordan en route to the United Arab Emirates in retaliation for Israel reneging on an agreement to allow Jordan’s Crown Prince Hussein to pray at Al-Aqsa Mosque on Lailat al-Miʿraj, a holiday marking a journey undertaken by the Prophet Muhammad.

While Jordanian pundits have avoided commenting on a new phase in Jordan-Israel relations under Bennett, the Israeli press urged the new premier to rebuild ties with his Hashemite neighbor. US President Joe Biden is believed to be urging Bennett to bolster ties with Amman, which is facing dire economic and health crises.

Pundits here believe relations will witness some improvement in the near future, but major obstacles remain in the way. Bennett is a hard-liner and he, too, opposes the two-state solution while supporting Jewish settlements and even annexation of major chunks of the West Bank. He is unlikely to stop Jewish settlers from their incursions of Al-Aqsa Mosque, which they call the Temple Mount. Some of these settler groups openly call for the destruction of the Muslim site.

It is a matter of time before an incident in East Jerusalem rattles ties between Jordan and Israel. What Israel sees as going back to normal with Amman, Jordanians, who are becoming increasingly angry over the kingdom’s growing dependence on Israeli natural gas and now water in addition to its attacks on holy sites, view it as the exact opposite.

But one major player who may succeed in resetting Jordan-Israel ties will be Biden, who is pushing both sides to come closer as he seeks to roll back most of Trump’s regional policies, especially with regard to the Palestinians. It is fair to say that the new administration in Washington is drawing a new regional role for Jordan, not only in relation to the Palestinians but also in connection to Iraq’s attempt to distance itself from Iran under Prime Minister Mustafa al-Kadhimi. Jordan is also providing key logistical support to the US military as it withdraws from Afghanistan and closes bases in Qatar. In March, Jordan made public a defense agreement with the United States that allows free entry of US forces, aircraft and vehicles onto the kingdom’s territory.

More will be become clear when Abdullah, as the first Arab leader, will visit the White House July 19, followed a few days later by Bennett.