25 years on, Jordan-Israel peace is frostier than ever

While there is no love lost between Jordan’s King Abdullah II and Israeli Prime Minister Benjamin Netanyahu, neither will take the risk of jeopardizing the fragile peace between their two states, at least for now. 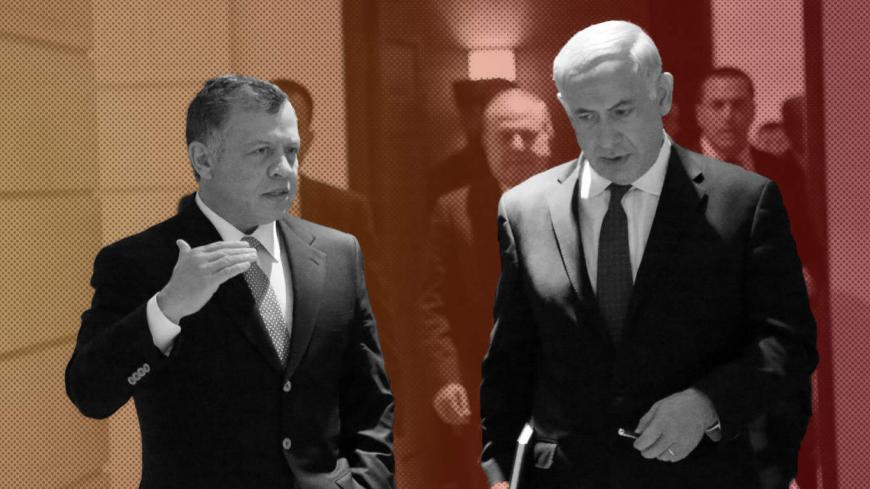 On the eve of the 25th anniversary of the Jordan-Israel peace treaty, relations between the neighboring states are frostier than ever. Neither is planning to hold events to mark the occasion on Oct. 26.

Instead of celebrating, Israel will be preparing to hand over Baqura and Ghumar, two tracks of land in the Jordan Valley. The transfer takes place on Nov. 10, a year after Jordan's King Abdullah II declined to renew the relevant treaty annexes leasing the land to the Israelis. On Oct. 10, the Jordanian Foreign Ministry dismissed Israeli reports claiming that Jordan had agreed to extend the leases on the border territories, which are being farmed by Israelis. “Final and irreversible” is how ministry spokesperson Sufian Qudah was quoted as describing the termination of the annexes.

A series of recent and more distant provocations by Israel is viewed as having driven the Jordanian decision to abrogate the annex agreements. These include the almost daily incursions by Jewish zealots on the Haram al-Sharif (Temple Mount); the failure by Israel to prosecute an Israeli diplomat accused of killing two Jordanians at the Israeli Embassy in Amman in 2017; and the gunning down of a Palestinian-Jordanian judge by an Israeli soldier at a border crossing in 2014. Another source of tension is said to be Israel’s hesitation to comply with constructing a joint water canal project between the Red Sea and the Dead Sea.

Abdullah’s distrust of Prime Minister Benjamin Netanyahu and the king's distaste of Israel's antagonistic policies toward Jordan and the Palestinians over almost a decade lie at the heart of the growing gap between the two countries. This stands in contrast to the personal chemistry that King Hussein and Prime Minister Yitzhak Rabin developed in the early 1990s and that lasted until the latter’s assassination in 1995. Both men had a remarkably optimistic vision of their countries' bilateral ties as well as peace between Israel and the Palestinians and by extension the rest of the Arab world.

By the time Netanyahu formed his second government, in 2009, relations between Israel and Jordan had survived several difficult tests. In one episode, in March 1997 in Baqura, a Jordanian soldier shot and killed seven Israeli schoolgirls, prompting Hussein to travel to Israel to offer condolences to the grieving families. In the other incident, which occurred in September 1997, Mossad agents attempted to assassinate Hamas leader Khaled Meshaal. Hussein threatened that unless Israel provided the antidote to save Meshaal’s life, he would view Netanyahu, as prime minister, as having abrogated the peace treaty. Netanyahu acquiesced to Jordan’s demands and further crisis was averted.

A poll conducted in Jordan in August by NAMA Strategic Intelligence Solutions and the German Konrad Adenauer Foundation revealed that some 70% of respondents preferred “limiting” political relations with Israel. Even with a majority of Jordanians resisting normalization with Israel, security cooperation between the two states continues at the highest levels. Israel's top military brass and intelligence officials view Jordan's stability as crucial to their own country's national security.

Netanyahu’s snubbing of the Palestinian Authority and the two-state solution, which Jordan adamantly backs, and his unbridled settlement building in the West Bank and East Jerusalem, especially during the last 10 years of Likud rule, severely strained ties with the kingdom. When in 2016 Netanyahu formed the most right-wing government in Israel’s history, Jordan sensed a real threat to its role as custodian of the Muslim holy places in East Jerusalem. Netanyahu looked the other way as Jewish extremists, including ministers in his own cabinet, began weekly and later almost daily incursions into the Haram al-Sharif compound.

Israel disregarded Jordan’s repeated denunciations of the incursions, the most serious of which took place on Aug. 11 of this year, when hundreds of Jews were allowed into the compound as Muslim worshippers celebrated Eid al-Adha, representing a clear violation of the long-standing status quo understanding between Israel and Jordan. The incursions continue to this day, adding strain to bilateral ties. Jordan accuses the Israeli government of attempting to establish Jewish prayer at Al-Aqsa Mosque, as there is at the Ibrahimi Mosque in Hebron.

US President Donald Trump’s “deal of the century” and his blatantly pro-Israel approach to ending the Israeli-Palestinian conflict have done nothing to help improve relations between Jordan and Israel. Abdullah was quick to warn against Trump’s decision in 2017 to recognize Jerusalem as Israel’s capital and to move the US Embassy from Tel Aviv. Jordan also defied US attempts to defund the United Nations Relief and Works Agency, which cares for millions of Palestine refugees, including those in the kingdom, and managed to secure international support to keep the agency afloat, for now.

It is no secret that Jordan views Trump’s (still forthcoming) peace plan as fulfilling the far-right Israeli agenda of destroying any chance of a Palestinian state and annexing the West Bank. When Netanyahu made an election pledge on Sept. 23 to annex the Jordan Valley, Abdullah responded the following day, telling a US broadcaster, “If the policy is to annex the West Bank, then that is going to have a major impact on the Israeli-Jordanian relationship and also on the Egyptian-Israeli relationship, because we are the only two Arab countries that have peace with Israel.”

Those on the Jordanian side who defend the peace treaty — and there are not many who do — argue that it has demarcated Jordan's border with Israel, secured 50 million cubic meters of water annually from the Yarmouk and Jordan Rivers, promoted security cooperation and recognized Jordan’s special role in protecting the Muslim holy places in Jerusalem.

Bilateral trade remains limited, with Israeli exports to Jordan estimated at between $50 million and $100 million per year in recent years, while Jordan’s net annual exports to Israel are estimated at around $100 million. With the peace process derailed, Israel’s aim of using Jordan as an export gateway to the rest of the Arab world remains unfulfilled.

In 2016, Jordan's National Electricity Power Company signed a controversial $10 billion deal for supplying the kingdom with 45 billion cubic meters of natural gas over 15 years from Israel's offshore Leviathan gas field. The deal faces rejection by both the Jordanian public and lawmakers for tying the kingdom’s energy needs to Israel. Under pressure, Abdullah ordered the government to review the deal in April, but work on the supply pipeline across the kingdom remains ongoing.

While Jordanian lawmakers continue to demand the cancellation of the peace treaty altogether, it is unlikely that Abdullah will move in that direction. Jordan is anxiously waiting to see who will form the next Israeli government. While there is no love lost between the king and Netanyahu, neither will take the risk of jeopardizing the fragile peace that exists between the two states, at least for now.