US President Donald Trump’s decision to recognize Jerusalem as Israel’s capital and to move the US Embassy there has added a new twist to the already strained relations between Israel and Jordan. 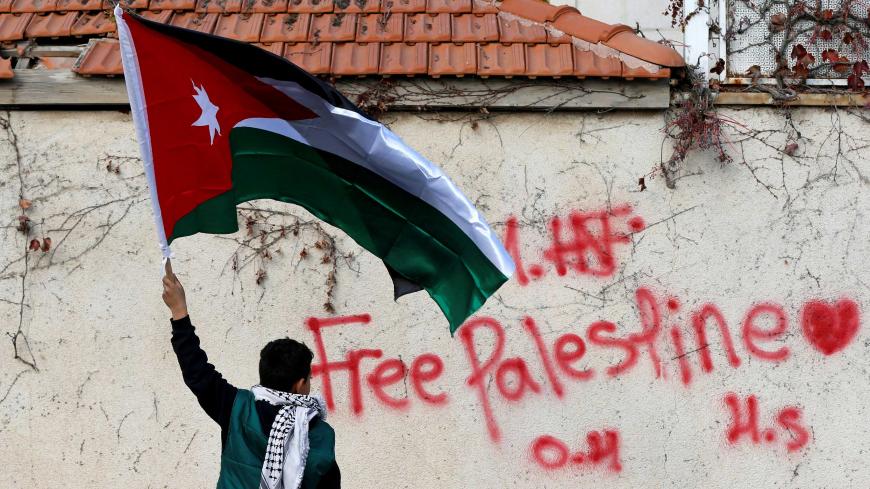 A boy holds the Jordanian national flag during a protest near the US Embassy in Amman, Jordan, Dec. 13, 2017. - REUTERS/Muhammad Hamed

US President Donald Trump’s Dec. 6 proclamation on Jerusalem appears to have complicated efforts to restore Jordan-Israel ties. The two countries have been embroiled in conflicts over repeated incursions on Haram al-Sharif (which Israel calls the Temple Mount) by Jewish settlers and the July 23 killing by a guard of two Jordanian citizens at the Israeli Embassy in Amman. Since then, Amman has refused to allow the Israeli ambassador and embassy staff to return to the kingdom until the assailant is put on trial and families of the victims are compensated. The row has threatened work on a regional water and energy project linking the Red Sea to the Dead Sea, an undertaking of high strategic importance to Jordan.

But Trump’s decision to recognize Jerusalem as Israel’s capital and to move the American embassy there has added a new twist to the strained relations between the two neighbors who signed a peace treaty in 1994. Encouraged by the government, tens of thousands of Jordanians have been protesting the US move following Friday prayers in Amman and other major cities across the kingdom. Enraged protesters have called on their government to abrogate the 23-year-old peace treaty and all bilateral agreements with “the Zionist entity.” Enmity toward Israel has reached new heights as Jordanians expressed solidarity with Palestinians in the occupied territories who have been clashing with Israeli soldiers almost every day since the Trump announcement.

Public outrage coincided with an extraordinary diplomatic offensive by King Abdullah aimed at rallying international support against the US move, which he had described as dangerous and a violation of international law. Jordan’s campaign had focused on the European Union, the Vatican, the Arab League and the Organization of Islamic Cooperation. Amman’s coordination with the EU had thwarted an attempt by Israeli Prime Minister Benjamin Netanyahu to convince European countries to support the US decision during a surprise visit to Brussels on Dec. 11.

Jordan has argued that the fate of Jerusalem, in particular occupied East Jerusalem, should be decided in final status negotiations between Israel and the Palestinians. Trump’s vague pronouncement is seen as pre-judging the city’s future, threatening Jordan’s special role as custodian of Muslim and Christian holy sites in the Old City and destroying the two-state solution. Furthermore, it pre-empts credible negotiations to reach a peaceful settlement and strengthens the Israeli far-right's false claims that a Palestinian state already exists in Jordan. Far worse, the decision resurrects Jordanian fears of a possible transfer of Palestinians by Israel to the east bank of the Jordan River, a scenario that undermines the Hashemite kingdom.

Such existential fears explain why the government has allowed anti-Israel, and in many cases anti-US, protests and sit-ins to continue. Jordan’s parliament has gone so far as to form a committee in December to review the peace treaty with Israel and other bilateral agreements, including last year’s multibillion-dollar gas deal between the kingdom’s national electricity company and a US company responsible for exploiting Israeli gas fields.

Jordan’s official and public reaction to Trump’s decision has not only added pressure on ties with Israel but may have rattled relations with Washington, the kingdom’s major economic and military backer. Observers here believe Amman can’t afford to threaten its peace treaty with Israel despite Netanyahu’s provocative stances. For years, Jordan and Israel had maintained a special security and intelligence-sharing relationship. Jordan’s internal stability has been traditionally defended by Israel’s top military and security brass.

Jordan’s first ambassador to Israel, former Deputy Prime Minister Marwan al-Muasher, told Al-Monitor that while “Israel is no longer a partner or a friend to Jordan, we cannot repeal the peace treaty or even amend it.” Muasher added, “What we can do is cancel the gas deal that makes us dependent on Israel for 15 years.”

In his view, Jordan has no cards to play in confronting Israel or the United States. “The only option for us is to strengthen our domestic front and close ranks, back the Palestinians so they can stay on their land and raise the cost of occupation for Israel,” Muasher said.

Political commentator and columnist Oraib al-Rintawi agreed. He told Al-Monitor, “This is the worst crisis to hit Jordan-Israel relations and we have to accept that we have no partners in Israel.”

In his view, the time when Jordan could influence the ruling elite in Israel has ended. “We are dealing with a new type of leadership that is hostile to us and we also have no real allies in the White House,” he said. With few options left, Rintawi said Jordan should continue to move diplomatically and try to create new alliances, but avoid major confrontations and “certainly the peace treaty with Israel should remain intact.”

Despite public outrage and parliament’s threat to review the peace treaty, which would not be the first time it has done so, it is unlikely that Jordan will take any step that risks its shaky peace with Israel. But there could be other moves that include suspending the unpopular gas deal or not renewing the lease of territory in the Jordan Valley to Israel. The 25-year lease ends next year and deputies have called on the government not to renew the agreement.

Columnist Mohammad Abu Rumman warned in his Dec. 18 piece in Al-Ghad that Jordanians should be aware that there is a cost for Jordan’s diplomatic offensive over the issue of Jerusalem. “We are almost alone in fighting this battle and there are disagreements with our Arab allies and our options are few and difficult,” he wrote.

“We should stick to our principles, but we must be aware that we will come under pressure at the worse economic times,” Abu Rumman concluded.