Jordan has always been a staunch supporter of the two-state solution and the Arab Peace Initiative, but that might not mean much anymore after Israel and the UAE agreed to normalize ties under a historic US-brokered deal. 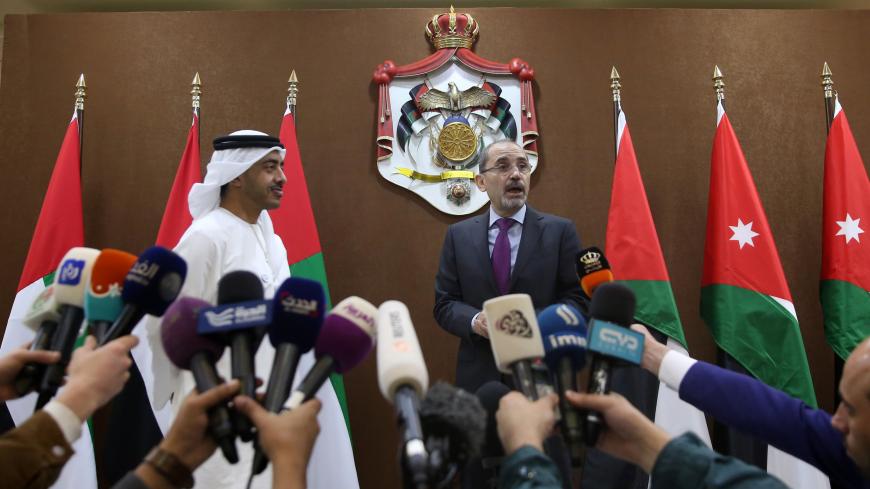 Jordan’s defense of the two-state solution as the only path for peace between Arab states and Israel has always been an uphill struggle that grew harder when Donald Trump moved into the White House. But the recent normalization agreement between the United Arab Emirates and Israel has made this objective more difficult to attain than ever. The UAE has claimed that the deal, announced by Trump on Aug. 14, has buried Israel’s plan to annex parts of the occupied West Bank, but Prime Minister Benjamin Netanyahu was quick to announce that annexation was still “on the table.”

For years Jordan has nervously watched Israel and a number of Gulf States engage in secret and sometimes open contacts, encouraged by Washington. Only the UAE, Bahrain and Oman sent their ambassadors to attend the unveiling of Trump’s peace vision at the White House on Jan. 28. Jordan’s King Abdullah has ignored the proposal and reiterated his support for the two-state solution as outlined by the Arab Peace Initiative of 2002. Under that plan, normalization between Arab states and Israel can only take place following Israel's withdrawal from the West Bank, paving the way for the creation of a Palestinian state with east Jerusalem as its capital.

Jordan’s reaction to the UAE-Israel deal was muted. Foreign Minister Ayman Safadi said in an Aug. 14 statement, “The deal will be tied to Israel’s actions in the post-agreement period,” according to the Jordan Times. Safadi was quoted as saying, “If Israel considers the agreement as a means to end the occupation and meet the Palestinians’ rights to freedom and the creation of a viable independent state with East Jerusalem as its capital on the pre-1967 borders, the region will move ahead towards realizing peace, or else Israel will deepen the conflict that will jeopardize the entire region’s security.”

His carefully worded statement, which avoided criticizing the UAE for breaking ranks with the rest of the Arab countries, reflected Jordan’s sensitivity over the sudden but unsurprising deal. King Abdullah and Abu Dhabi’s Crown Prince Mohammed bin Zayed have a close working relationship. The Jordanian monarch was in Abu Dhabi as recently as July 22 to discuss ways to improve bilateral ties and regional issues including the challenges facing the Palestinian cause. Both leaders rejected any unilateral steps in reference to Israel’s intention to annex parts of the West Bank, according to a royal court statement.

Newspaper columns avoided any mention of the UAE-Israel deal while the news received minimal media coverage. Only columnist Fahd al-Khitan, who is known for having close ties to the government, wrote on the subject for Al Ghad on Aug. 15. He said that the deal was a way for both Trump and Netanyahu to walk away from the annexation move, which was rejected by the entire world. Khitan added that normalization has become the objective rather than a just and lasting peace deal based on the Arab Peace Initiative, which is no longer valid.

But Jordanians were openly critical of the deal on social media, going as far as accusing Emirati leaders of treason and of abandoning the Palestinians. Though Jordan and Israel signed a peace treaty 26 years ago, a vast majority of Jordanians, many of Palestinian origin, are against normalization with Israel.

With more Arab countries expected to follow the UAE’s example before the November US elections, Jordan’s longstanding political approach to resolving the Palestinian-Israeli conflict will become a minority position. But there are no signs that Amman is changing course.

On Aug. 18, Safadi paid a surprise visit to the West Bank city of Jericho to meet with the secretary of the Central Committee of the Palestine Liberation Organization, Saeb Erekat. A Foreign Ministry statement read that Israel's halting of its plan to annex Palestinian lands and embrace of the two-state solution are necessary conditions for "opening a political horizon" and that the Arab Peace Initiative is “the sole path” to peace.

But while Netanyahu bragged about other Arab countries joining the UAE, Jordanian officials breathed a sigh of relief when after almost a week of silence, Saudi Arabia renewed its commitment to the Arab Peace Initiative. Saudi Foreign Minister Prince Faisal bin Farhan was quoted by Arab News on Aug. 19 as saying that peace must be achieved with the Palestinians on the basis of the initiative before any changes can be made in ties with Israel. “When we sponsored the Arab Peace Plan in 2002, we fully envisioned that there would eventually be relations between all Arab states, including Saudi Arabia, and Israel if the condition is met,” Farhan said.

The Saudi reaction will boost Jordan’s position, but Amman knows that Washington will continue to exert pressure on Arab capitals to follow the UAE's example.

Unlike any other Arab country, Jordan has a unique relationship to the West Bank, which was under Jordanian administration when it was occupied in 1967. The kingdom hosts two million Palestinian refugees and its "open bridges" policy is the West Bank’s only gateway to the rest of the world. Furthermore, under the Jordan-Israel peace treaty, the king enjoys a special role as custodian of Al-Aqsa Mosque in east Jerusalem, long a source of tension between Jordan and Israel. With Israel inviting Muslims to visit the mosque via Abu Dhabi or Dubai, Jordan fears that its special role may be compromised.

Head of the Jerusalem Center for Political Studies Orieb al-Rintawi told Al-Monitor that Jordanian officials were shocked by the UAE-Israel deal and had not been consulted before its announcement. “Jordan is worried that the deal will set a new approach to resolving the conflict, one that departs from the two-state solution and replaces it with Trump’s peace vision,” he said.

“The deal is more than just normalization of ties; it is close to a strategic alliance in the region which would introduce a new strategic agenda for the region that leaves Jordan and the Palestinians by themselves,” Rintawi added.

Political analyst and head of the Middle East Center for Media and Political Studies Amer Sabaileh believes the damage to Jordan’s geopolitical role will be limited. “Jordan’s ties to the West Bank are both geographical and demographic in nature. Its peace treaty with Israel benefits both sides, especially in the security area, and neither side will risk damaging bilateral ties,” he said.

Sabaileh added, “On the other hand, Jordan used to be the back channel for any contacts between Israel and the Gulf and that is now ending. With the new deal, that back channel is no longer needed.”

The signing of the UAE-Israel normalization accord will reportedly take place in Washington next month. The question now is whether Jordan will attend the signing ceremony. There will be a price to pay for either choice.