In the week ahead of President Joe Biden's inauguration, Jordan engaged in a flurry of diplomatic activity. 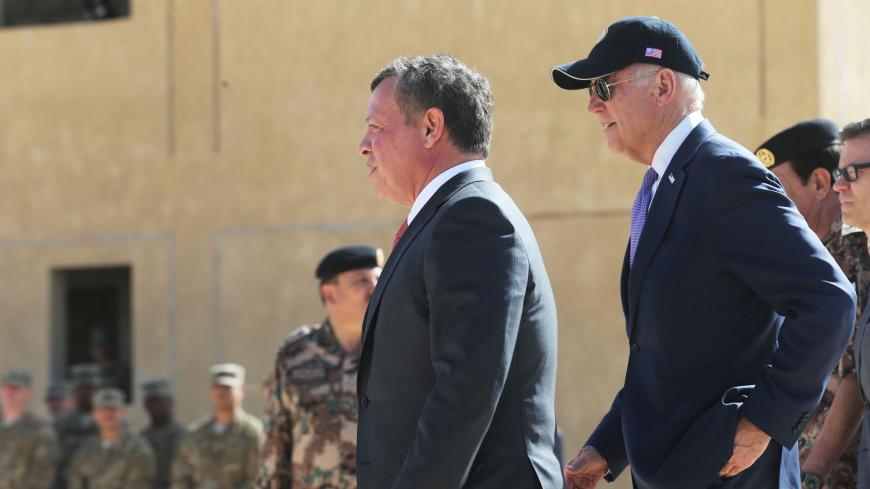 US Vice President Joe Biden (R) visits with Jordan's King Abdullah (L) at a joint Jordanian-American training center on March 10, 2016, in Zarqa, northeast of Amman, Jordan. It was the final stop on Biden's Middle East tour that also took in Israel and the Palestinian territories. - Jordan Pix/Getty Images

Jordan engaged in a flurry of diplomatic activity ahead of Joe Biden's inauguration as president in an effort to help lay the groundwork for a fresh engagement with the United States following years of frustration for many countries that was brought about by the unilateral approach of the Donald Trump presidency.

On Jan. 18, King Abdullah hosted Egyptian President Abdel Fattah Al-Sisi in Amman. The two leaders held talks that covered bilateral ties and regional issues. They also discussed ways to expand Jordanian-Egyptian-Iraqi cooperation while building on progress made at the three previous summits, according to a royal court statement. The king reaffirmed Jordan’s standing position calling for a just and comprehensive peace on the basis of the two-state solution that guarantees the establishment of an independent, sovereign and viable Palestinian state on the June 4, 1967, lines with East Jerusalem as its capital, the statement said.

Sisi was quoted as saying that Egypt will continue to push for efforts to secure Palestinian rights, adding that supporting the Palestinian cause is a fundamental element of Egyptian policy.

On Jan. 17, the chiefs of the Egyptian and Jordanian intelligence services arrived in Ramallah, where they met with Abbas. Ahmed Husni, head of the Jordanian General Intelligence Directorate, and Abbas Kamel, head of Egypt’s General Intelligence Service, discussed preparations for the Palestinian legislative and presidential elections to be held for the first time in 15 years later this year. Elections are to be held for the PA presidency, parliament and the PLO’s Palestinian National Council.

The visit was within the context of ongoing coordination between the Palestinians and the two Arab countries in preparation for engaging the Biden administration, a Palestinian Authority official in Ramallah said.

Sisi’s visit to Amman came two days after Abdullah flew to Abu Dhabi on Jan. 16 to hold talks with Sheikh Mohammed bin Zayed Al Nahyan, the crown prince of Abu Dhabi and the deputy supreme commander of the UAE armed forces. Jordan's royal court said in a statement that the talks focused on the need to maintain coordination and consultation on issues of mutual concern, while bolstering cooperation across all sectors.

The meeting covered the latest Arab and regional developments, foremost of which is the Palestinian cause and means of achieving peace in the region, the statement said. It added that the king stressed the importance of reaching a just and comprehensive solution to the Palestinian cause on the basis of the two-state solution. He also welcomed the outcome of the Gulf Cooperation Council summit held Jan. 5 in Saudi Arabia that ended the rift between Qatar and its Gulf neighbors as well as Egypt.

While the king was in Abu Dhabi, his foreign minister, Ayman al-Safadi, was in the Saudi capital, Riyadh, on a rare visit where he held talks with his counterpart Prince Faisal bin Farhan. In addition to discussing bilateral ties, the two men reviewed Jordanian-Saudi coordination and consultation toward resolving regional crises and achieving security and stability, according to the Jordan Times. It added that the two sides also stressed the need for efforts to relaunch “serious” peace negotiations between the Palestinians and Israelis based on the two-state solution and the Arab Peace Initiative. Renewed Saudi commitment to the Arab Peace Initiative is important for both Jordan and the Palestinians as it comes in the wake of the signing of normalization agreements between Israel and a number of Arab countries in the past few months.

Abdullah had parted ways with the Trump White House over the president’s handling of the Middle East peace process. The king was bold enough to reject Trump’s recognition of Jerusalem as Israel’s capital in December 2017 and had rebuffed the peace plan Trump released in January 2020. Jordan rallied Western donor countries to support the UN Relief and Works Agency for Palestinian refugees after the Unied States suspended its financial backing for the agency. Abdullah had done so despite the kingdom’s heavy dependence on America’s economic aid and Jordan's reliance on US political and military support.

Under the Trump administration, Jordan had felt its regional role marginalized as US officials supported direct talks between Israel and Gulf states. Abdullah continued to underline his backing for the two-state solution as the only path to resolving the Palestinian issue.

Since Biden’s victory in the November presidential election, the mood in Amman has been upbeat. Abdullah was the first Arab leader to congratulate Biden for his electoral victory and speak with him. Biden had renewed his support for resolving the Israeli-Palestinian conflict based on the two-state solution.

The king is now in position to put Jordan in the forefront of regional players as he is expected to be the first Arab leader to visit Washington, most probably in March, and meet with President Biden. “The king feels that there is a good chance that the peace process could be resumed under Biden and salvage what remains of the two-state solution,” Orieb Al-Rintawi, head of the Jerusalem Strategic Study Center in Amman, told Al-Monitor. “This is the reason for the recent burst of diplomatic action out of Amman,” he said.

“There is also a belief that there is a need to reunite Arab countries over a new vision for peace with Israel following the series of normalization deals in recent months,” Rintawi said. “Jordan sees that these deals may be used as leverage over Israel to resume negotiations with the Palestinians,” he added.

Writing in Al-Ghad daily Jan. 19, political commentator Fahd al-Khitan said Amman had become the center of active diplomatic moves aimed at preparing the region for the post-Trump era. “Jordan sees hope for forming a united Arab stand on resolving the Palestinian issue now that there is a new US administration and following the resolution of the Gulf rift,” he said. “The king has unique ties in Washington, especially with the Biden team, that no other Arab leader has and Jordan will emerge as a key regional player in the coming weeks and months,” Khitan added.

One sign of growing optimism in Amman was the nomination by Biden of veteran diplomat William Burns to head the CIA. Burns had served as US ambassador to Jordan between 1998 and 2001 and is believed to have a deep and balanced understanding of the region, particularly the Israeli-Palestinian conflict.