Jordan clings to two-state solution in wake of normalization deals

With normalization deals being signed and regional dynamics in flux, Jordan is trying to adapt to what it fears is faltering Arab support for the Palestinian issue and a two-state solution. 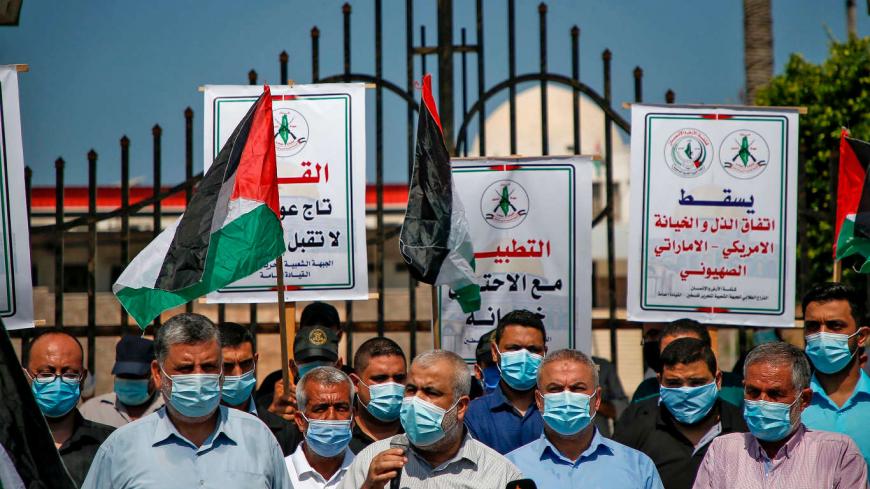 Demonstrators, mask-clad due to the COVID-19 pandemic, attend a protest against the United Arab Emirates' and Bahrain's decisions to normalize relations with Israel, in Gaza City, on Sept. 15, 2020. - MOHAMMED ABED/AFP via Getty Images

Jordan has been watching moves to normalize ties between Gulf states and Israel with concern as the Arab consensus has crumbled around conditioning the recognition of Israel to its withdrawal from Palestinian territories occupied in 1967 and the creation of a Palestinian state.

US President Donald Trump has stated that "seven or eight" states may soon follow suit in normalizing ties with Israel. Jordan declined a White House invitation to attend the Sept. 15 ceremony in which the United Arab Emirates and Bahrain signed historic agreements recognizing Israel.

Jordan has reacted to the latest developments by reiterating Amman's position on the Palestinian question. On Sept. 17, Prime Minister Omar Razzaz told a local radio station that there will be no lasting and comprehensive peace while Israel continues to take unilateral steps that undermine the Palestinian people’s legitimate right to an independent state with east Jerusalem as its capital. He added that Jordan wants to maintain a united Arab stance on this issue.

While ordinary Jordanians were quick to denounce the White House event on social media, calling the step taken by the UAE and Bahrain a betrayal, local news outlets avoided any mention of the ceremony. All eyes are now on Saudi Arabia, whose official position continues to back the 2002 Arab Peace Initiative. There has not been any public contact between Amman and Riyadh since the UAE declared its readiness to normalize ties with Israel last month. A reliable source told Al-Monitor that Jordan had informed the UAE of its decision not to attend the White House ceremony and that Abu Dhabi understood Amman’s delicate position.

The source also said that Jordan is frustrated with Palestinian President Mahmoud Abbas’ refusal to engage the Trump administration and his lack of a strategy in dealing with a series of setbacks that began with Trump’s 2017 decision to recognize Jerusalem as Israel’s capital. Jordan cannot afford to wait much longer for Abbas to change his mind and it must consider its interests in the wider region, the source said.

Jordan was among a majority of Arab countries that voted against a Palestinian proposal presented at the Arab League on Sept. 16 condemning the US-brokered deal between the UAE and Israel.

Against a changing geopolitical terrain, Jordan is trying to adapt pragmatically to the reality that Arab consensus on the Palestinian issue may be breaking up. For decades Jordan, which signed a peace treaty with Israel in 1994, positioned itself as a buffer between Israel and the Gulf states. Its unique ties to the Palestinians played a pivotal role in sustaining its commitment to the two-state solution, especially under Trump’s presidency. King Abdullah was quick to reject Trump’s recognition of Jerusalem as Israel’s capital and to lead efforts to salvage UNRWA, the UN body responsible for the welfare of millions of Palestinian refugees. Amman ignored Trump’s peace plan that was unveiled last January while continuing to defend the two-state solution.

Jordan had relied on Gulf financial aid for decades, but with the sharp drop in oil prices and the dire effects of the COVID-19 pandemic on regional economies, the flow of aid has dried up. And with Jordan and some Gulf countries parting ways on the Palestinian question, Amman finds itself walking a tightrope. It knows that it cannot abandon its commitment to the two-state solution, but it also realizes that it cannot afford to let the issues affect its close relations with the Gulf states, where tens of thousands of expatriate Jordanians live and work.

In dealing with new regional dynamics, Jordan, which is facing unprecedented economic challenges, is trying to build an economic alliance with Egypt and Iraq. But with both countries facing their own enormous political and economic difficulties, that alliance is unlikely to deliver dividends anytime soon. Unlike Abdullah, Egyptian President Abdel Fattah al-Sisi publicly welcomed the recent normalization deals.

Jordan is also careful not to antagonize the United States, its primary political, economic and military backer. Ironically, while Israel is celebrating normalization with two Gulf countries, its peace with Jordan remains frigid at best, with Abdullah not hiding his suspicions of Prime Minister Benjamin Netanyahu’s intentions of changing the status quo of Al-Aqsa Mosque in Jerusalem’s Old City, over which the Jordanian monarch holds a special role as custodian.

Professor of political science at the University of Jordan Hassan Barrari told Al-Monitor that the recent normalization agreements present a series of strategic challenges for Jordan. “For one, these agreements will not stop Netanyahu’s annexation plans, nor do they end the conflict with the Palestinians along the two-state solution, which is an existential issue for Jordan,” he said. “Jordan has lost its role as a gateway to any Israel-Gulf security and economic arrangements, while the decades-old Arab solidarity with the Palestinians is wavering. Moreover, Jordan fears that its role over Jerusalem holy places may be compromised as the UAE will now fly Muslim pilgrims directly to Israel and bypassing Jordan,” Barrari added.

“Let’s also consider that the demise of the two-state solution, which Israel rejects, endangers Jordan’s security and stability, which means that even though we have a peace treaty with Israel, future confrontations between the two cannot be discounted,” he said.