What are Jordan’s options if Israel annexes West Bank?

Jordan is considering suspending parts of the 1994 peace treaty with Israel, sources told Al-Monitor, if Israel goes ahead with its plan to annex parts of the West Bank and the Jordan Valley. 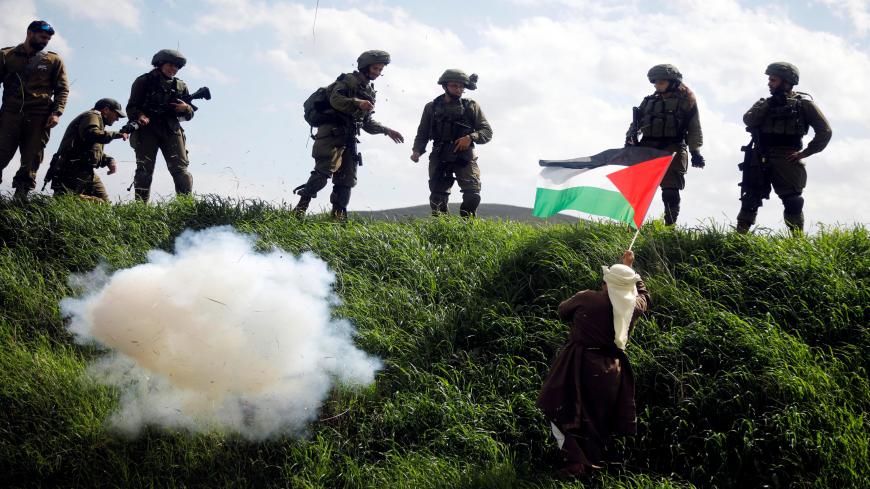 A demonstrator holds a Palestinian flag in front of Israeli forces as a sound grenade explodes during a protest against Israeli settlements, in the Jordan Valley, Israeli-occupied West Bank, Feb. 29, 2020. - REUTERS/Raneen Sawafta

More than two weeks after Jordan’s King Abdullah issued what can only be described as the sternest warning to Israel if it goes ahead with its annexation plans, Jordanians and Israelis are still wondering how Amman will react if Israeli Prime Minister Benjamin Netanyahu does go ahead with his intention to annex parts of the West Bank and the Jordan Valley as early as July.

In his May 15 interview with German magazine Der Spiegel, the king warned of “a massive conflict” between Jordan and Israel “if Israel really annexed the West Bank in July.”

“I don’t want to make threats and create an atmosphere of loggerheads, but we are considering all options. We agree with many countries in Europe and the international community that the law of strength should not apply in the Middle East,” the king was quoted as saying.

In what was seen as doubling down on the king’s position, Prime Minister Omar Razzaz told the official Jordanian news agency Petra May 21, “[Jordan] will not accept this [annexation], and accordingly, there will be an opportunity for us to reconsider the relationship with Israel in all its dimensions, but we will not rush ahead of things.”

He added that the Israeli plans “come in exceptional circumstances represented by the coronavirus pandemic and the world's preoccupation with it,” and that “it became clear that there is an intention on the Israeli side to take advantage of the current situation in order to impose unilateral measures on the ground.”

Razzaz’s statement came a day after Palestinian President Mahmoud Abbas declared May 20, "The PLO and the state of Palestine are absolved, as of today, of all the agreements and understandings with the American and Israeli governments and of all the commitments based on these understandings and agreements, including the security ones.”

Jordan has not commented on the Palestinian decision although a source close to the Jordanian government, who requested anonymity, told Al-Monitor that Jordan was in favor of the Palestinians “engaging the [Donald] Trump administration” in order to delay or foil Israel’s annexation plans.

Netanyahu, who formed a new government May 17 and vowed to extend Israeli sovereignty over parts of the West Bank, had not responded to King Abdullah’s warning. But newly appointed Foreign Minister Gabi Ashkenazi of the Blue and White party that partnered with Netanyahu’s Likud was quoted by the Jerusalem Post May 18 as saying that he saw “a great importance in strengthening the ties with the countries with which we have peace, Egypt and Jordan.” He added that both countries “are the most important allies in dealing with regional challenges.”

Israeli pundits have been divided over the king’s remarks. While some, including former security officials, have cautioned Netanyahu over the risk to the peace treaty with Jordan if he goes ahead with annexation, especially of the Jordan Valley; others, particularly those on the far right, have attacked the king with one commentator describing his warning as “empty threats,” adding that the peace treaty guarantees the survival of his regime.

But what would Jordan do if Netanyahu does go ahead with annexation? Al-Monitor has learned that Jordan is considering, among other options, suspending parts of the 1994 peace treaty claiming that the Israeli annexation of the Jordan Valley violates the delineation of borders between Israel and Jordan, in addition to being illegal under international law and pertinent United Nations resolutions. Immediate reaction may include expelling the Israeli ambassador in Amman and recalling the Jordanian ambassador in Tel Aviv.

The unilateral annexation of parts of the West Bank is seen as presenting an existential threat to Jordan’s national security. It not only renders the two-state solution irrelevant, but it resurrects some far-right Israeli claims that Jordan is a de facto Palestinian state. It also raises fears about the fate of over 2 million Palestinian refugees living in Jordan. Jordan had not supported Trump’s peace vision, unveiled last January, and rallied Arab and international support for the two-state solution.

Writing in Al-Ghad daily May 16, political commentator Fahd al-Khitan said, “Jordan will not pull out of the peace treaty with Israel because that option means going back to a state of war that Jordan cannot afford.”

“What is meant by a massive conflict is that bilateral ties will be frozen at all levels because Israel’s unilateral actions will destroy the elements of a just and lasting peace while toppling Washington’s ambitions of creating a new basis for regional cooperation,” he added.

Political commentator Oraib al-Rintawi believes that Jordan’s reaction will be calculated and will gradually escalate. Writing in Ad-Dustour daily May 17, he said that abrogating the peace treaty is not the first option. “One wonders about the fate of bilateral security coordination, the gas deal with Israel and two-way trade,” he wrote.

But he admits that the timing of the impending crisis is sensitive since Jordan is dependent on US aid and is facing tough economic conditions made even worse by the coronavirus outbreak. “Our options are not set in stone and we could still use our special ties with the international community and with those in Washington outside the White House to put pressure on Israel short of succumbing to the new reality,” Rintawi added.

The only official US reaction to Abdullah’s warning came from US State Department’s chief spokeswoman Morgan Ortagus May 15, made during a phone briefing with Israeli reporters. Asked about her reaction to the king’s statement, she said, “The United States has a close relationship with the state of Jordan. We know that Jordan plays a special role in the Middle East, especially their relationship with Israel. What we want for both Israel and Jordan is a relationship that is not only strong on the security level, but that is also strong at the diplomatic level and the economic level.”

“We certainly understand that the king has expressed his concerns today and again that is why we think it is important to turn back to President’s Trump’s Vision for Peace, and to bring all parties to the table to work toward this peace plan,” she added.

But what worries some Jordanians is the US reaction to Jordan’s tenacious position on Trump’s peace plan. There is a growing belief that the Israeli lobby in Washington could be behind a letter that was sent earlier this month by six Republican congressmen to the Jordanian Embassy in Washington demanding the extradition of Jordanian national Ahlam al-Tamimi, who was previously convicted in Israel over the 2001 bombing of a Jerusalem pizzeria. Tamimi was released in a Hamas-Israel prisoner exchange in 2011, and a high court in Jordan rejected a US request for her extradition in 2017.

Under a 2019 US law, Jordan could be prevented from receiving US aid for violating an extradition treaty in relation to individuals wanted on charges for which the maximum penalty is life imprisonment without the possibility of parole. Jordan claims the extradition treaty was never ratified by parliament.

There has been no official reaction in Amman to the congressmen's letter. But political columnist Maher Abu Tair wrote in Al-Ghad daily May 22 that while Jordan has enjoyed bipartisan support in Washington, it is now receiving conflicting messages. “The threat of economic sanctions against Jordan over the Tamimi case is an important sign that should not be missed,” he wrote. “Could this be tied to Jordan’s escalation toward Israel’s threat of annexation and what could affect the peace treaty with Israel?” Abu Tair asked. “We should keep an eye on the activity of the Israeli lobby in Washington while taking into consideration the possibility that the US administration may not like our latest position … in any case neither US interest nor those of Israel will be served by weakening Jordan,” he concluded.