Even though the controversial Israeli annexation plan appears to be on hold for now, Jordan is careful not to let down its guard. 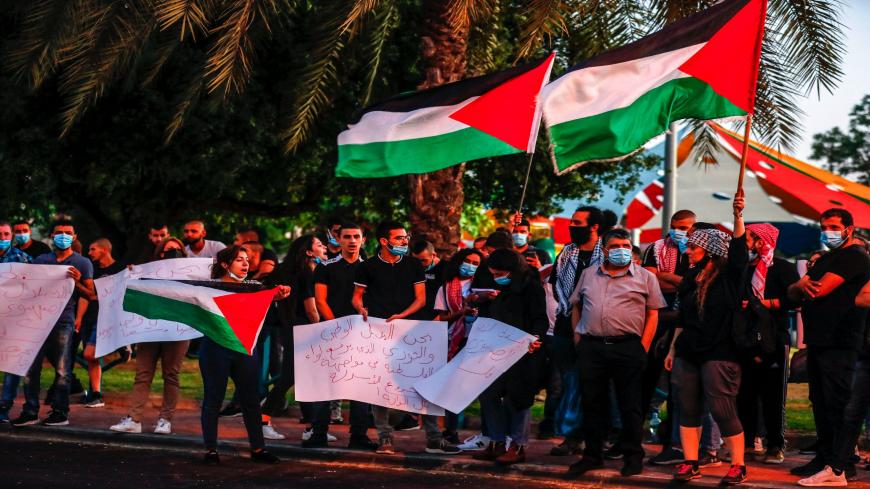 Demonstrators, mask-clad due to the COVID-19 pandemic, wave Palestinian flags as they gather for a protest against Israel's plans to annex parts of the West Bank, in the Arab town of Arara in the Wadi Ara region of northern Israel, on July 1, 2020. - AHMAD GHARABLI/AFP via Getty Images

The July 1 deadline set in March by Israeli Prime Minister Benjamin Netanyahu to begin a process of annexing up to 30% of occupied West Bank territories has come and gone, and nothing happened. There is a sense of reserved relief here in Jordan, a country whose leader, King Abdullah II, emerged as one of the most vociferous critics of the annexation, issuing on May 15 a terse warning of “a massive conflict” between Jordan and Israel “if Israel really annexed the West Bank in July."

But even though the controversial and illegal move appears to be on hold for now, Jordan is careful not to let down its guard. During a meeting with a number of military retirees July 1, the king stressed that “Jordan’s position on the Palestinian cause remains unwavering,” reaffirming that “any unilateral Israeli measures to annex lands in the West Bank are unacceptable,” according to a Royal Court statement cited by The Jordan Times. He added, “Jordan has clearly expressed its steadfast position that such measures would undermine chances to achieve peace and stability in the region,” pointing out that the kingdom was coordinating its position with a number of Arab and European countries.

While rejecting any form of annexation, Jordan was particularly critical of plans to annex most of the Jordan Valley on the Palestinian side. By doing so, Israel would be severing any geographical connection between Jordan and what Amman sees as the future Palestinian state under the two-state solution. Jordan and the rest of the Arab countries have rejected the Donald Trump peace plan unveiled at the White House Jan. 28. The plan allowed Israel to annex Jewish settlements in the West Bank as well as the Jordan Valley, while recognizing a Palestinian state on bits and pieces of whatever remains. It sealed the fate of East Jerusalem as well as Palestinian refugees, 2 million of whom reside in Jordan.

Even as the kingdom battled the coronavirus pandemic, King Abdullah and Foreign Minister Ayman Safadi conducted talks with leading Arab and European officials in a bid to build diplomatic momentum against annexation. The fact that a number of European countries had warned of “consequences” including possible economic sanctions against Israel if annexation took place is seen in Amman as the fruition of an extensive Jordanian diplomatic campaign.

On June 17, King Abdullah held conference calls with US congressional leaders underscoring the danger that Israeli annexation poses to regional stability and to the peace treaty with Israel. On June 18, more than 190 Democrats in the House of Representatives sent a letter to the Israeli government arguing that “unilateral annexation puts both Israel’s security and democracy at risk” and “would have a clear impact on Israel’s future and our vital bilateral and bipartisan relationship.”

While Jordanian officials did not specify what Amman’s reaction would be if annexation takes place, local analysts said the king has a number of options available to him, including downgrading diplomatic ties and suspending parts of the 1994 peace treaty. On June 29, the Israeli press reported, citing unnamed Israeli officials, that King Abdullah made it clear to Israel that he will not accept even a limited annexation of West Bank land and will respond to any such move in the same way it would react to the unilateral annexation of all settlements and the Jordan Valley. The message was reportedly conveyed to the head of the Israeli Mossad, Yossi Cohen, who visited Amman in the last week of June and met with the king. The Jordanian media did not report the visit.

Because of the unique historical political and demographic ties between Jordan and the West Bank, Amman sees annexation as a direct existential threat to its own stability. A poll conducted by the University of Jordan’s Center for Strategic Studies and published June 24 found that a majority of Jordanians believe that the biggest external threat to the kingdom is Israel’s planned annexation of the West Bank.

Political analyst Labib Kamhawi told Al-Monitor that compared to the position of other Arab leaders, “The king was the most courageous and bold.” But he warned that the delay in annexation does not mean “the conspiracy has failed.” Kamhawi said the purpose of annexation is to erase the term “occupation” from the annals of the conflict, “just as Israel has labeled the occupied territories as disputed territories; it’s a piecemeal land grab.”

Head of the Jerusalem Center for Strategic Studies Orieb al-Rintawi told Al-Monitor that “the sword of annexation is still hanging over the Palestinians and Israel is not backing away anytime soon.” He added that Israel is having a tough time swallowing a big bite of the West Bank without facing the consequences.

“Jordan’s bold position in backing Palestinian rights and threatening bilateral ties with Israel was instrumental in building an international front leaving Netanyahu by himself to confront the rest of the world. But the game is not over,” he said. “We have learned the hard way that partial or symbolic in Israel’s view soon becomes comprehensive and permanent. We should remain vigilant,” he added.