While Jordan's King Abdullah focused on economic relations during the trilateral summit Aug. 25, the two-state solution to resolve the Palestinian issue and the recent Israel-UAE normalization agreement were also discussed by the three countries. 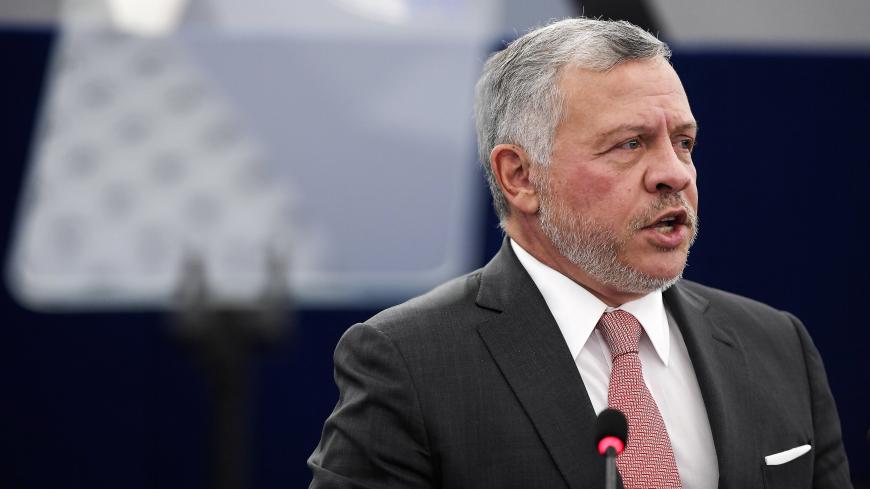 Jordanian King Abdullah II gestures as he delivers a speech at the European Parliament, on Jan. 15, 2020, in Strasbourg, eastern France. - FREDERICK FLORIN/AFP via Getty Images

Jordan’s King Abdullah hosted Egyptian President Abdel Fattah al-Sisi and Iraqi Prime Minister Mustafa al-Kadhimi at a one-day trilateral summit at Amman airport Aug. 25, the third of its kind in 17 months, which was seen by analysts in Jordan as a response to shifting regional geopolitical dynamics. The summit was attended by senior officials on the three sides, including Jordan’s Crown Prince Hussein.

In a joint communique released after the meeting the three leaders stressed the need to translate the strong strategic ties between the three countries into cooperation in vital sectors, such as electricity interconnection, energy projects and a joint economic zone, while capitalizing on each country’s potential to achieve an integration in resources, especially to deal with the implications of the coronavirus pandemic on healthcare and food and economic security, according to the Jordan Times.

In an opening statement, carried by the royal court, the king was quoted as saying that the meeting was very important “in light of the current extraordinary conditions in the region and the world.” He also stressed the importance of close coordination and joint action to deal with rapid developments in the region and foreign meddling attempts. The king went on to say that the Palestinian cause remains the core issue in the region, and that Jordan continues to call for a two-state solution that ends the Israeli occupation and leads to the establishment of an independent Palestinian state on the 1967 lines.

Kadhimi stressed Iraq’s support for the Palestinian cause and the Palestinian people’s right to statehood, adding that Baghdad’s vision is based on avoiding conflict and seeking economic cooperation and integration with Jordan and Egypt, according to the royal court statement. The same statement quoted Sisi as saying that he agreed with the king on the Palestinian cause and the importance of reaching a solution, based on the two-state solution, noting that this would have a positive impact on the entire region.

The meeting took place following the Aug. 13 announcement by US President Donald Trump that the United Arab Emirates (UAE) and Israel had reached an agreement to normalize relations. Egypt had welcomed the agreement, while Jordan's Foreign Minister Ayman Safadi made reference to it in a statement, saying it should push Israel to accept a Palestinian state.

Kadhimi had concluded what was described as a successful visit to Washington a week before, where he and Trump reiterated the status of the strong bilateral strategic relationship.

King Abdullah’s reference to foreign meddling in the region is believed to point to Turkey and Iran — two non-Arab countries that are adding to instability in Iraq and Syria. Turkey’s military involvement in Libya and its attempt to expand its maritime sovereignty in the eastern Mediterranean has heightened tensions between Cairo and Ankara.

Jordan continues to support the two-state solution as the only way to end the Palestine-Israel conflict based on the Arab Peace Initiative, even as the US administration is pressuring other Arab countries to follow in the UAE’s footsteps.

The three countries face deep economic challenges and the three leaders believe they can pool their resources and expertise to build a common economic platform. The last time these countries joined ranks was in 1989 when they created the Arab Cooperation Council (ACC), which included northern Yemen, in response to being left out of the Gulf Cooperation Council (GCC). The ACC collapsed when Saddam Hussein invaded Kuwait in 1990.

Political analyst Labib Kamhawi told Al-Monitor that the summit had two purposes: political and economic. “Politically it had to do with the implosion that hit the GCC [over the Qatar boycott and the UAE normalization deal with Israel] and the vacuum it had left, making it essential to create a new regional platform that would stand up to foreign meddling,” he said. “Iraq has deep issues with Iran, Turkey and the United States, and Egypt is facing challenges in Libya and with Ethiopia, and Jordan finds itself in a minority vis-a-vis the two-state solution,” Kamhawi said.

Writing in the London-based New Arab daily Aug. 29, political analyst and former Culture Minister Mohammad Abu Rumman pointed to Kadhimi’s reference, while he was in the United States, to a Europe-like future for the region, with freer flows of capital and technology in what he called "the new Levant."

“While the term was not mentioned during the Amman summit, Kadhimi’s use of it coincides with the reality of the collapse of the traditional powers of the Arab East — namely Iraq, Syria and Egypt — against the rise of smaller powers that are trying to fill the void,” Abu Rumman said.

He added, “This is what the trilateral summit was trying to respond to — in a timid way — through an alliance that remains vague in its goals and policies and the diverse visions of each country. From a specific angle, those three countries that had played a leading role in supporting the Palestinian cause have now been replaced by a new US-backed alliance — which includes the UAE and Saudi Arabia — to install a new regional peace formula.”

Head of the Jerusalem Center for Political Studies Orieb al-Rintawi told Al-Monitor that the UAE-Israel deal heralds the end of all forms and institutions representing pan-Arab cooperation including the Arab League. “These three countries will need to rely as little as possible on politics because of their unique ties to the United States and others, and as much as possible on economics as a common denominator,” he said. “Even then with so many internal challenges facing each country the road to reaching economic complementarity will prove difficult at best.”

One immediate test of the alliance the three leaders will face is how to respond to White House invitations to attend a high-profile ceremony to mark the signing of the Israel-UAE deal in Washington expected to take place in the first half of September.