Amid accelerated regional threats and economic repercussions in the wake of the coronavirus pandemic, a tripartite summit was held between the leaders of Egypt, Jordan and Iraq Aug. 25 to develop a security, diplomatic and economic bloc. 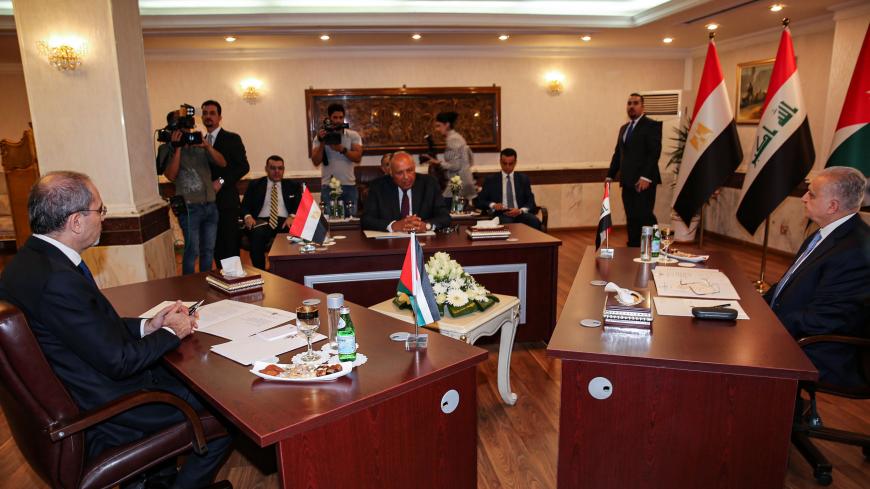 A tripartite summit was held in Amman Aug. 25 between Egypt, Jordan and Iraq to develop a security, diplomatic and economic bloc, at a time when the three countries face accelerated regional threats and economic repercussions in the wake of the coronavirus pandemic.

The summit tackled the joint tripartite coordination in the sectors of energy, electrical interconnection, main infrastructure and food, and involved deliberations and coordination on the security and political developments in the region and efforts to counter terrorism, as per the Egyptian presidency statement Aug. 25.

The Egyptian presidency stated that the three leaders aim at establishing an upcoming phase of strategic integration based on the joint development goals by boosting areas of economic, trade and investment cooperation, in addition to fostering political and security cooperation.

Sisi underlined the importance of joining efforts among the three countries to face challenges threatening stability and security in the region.

The three leaders agreed to stand against foreign interventions destabilizing Arab security and emphasized the need to stop them. They also talked about increasing efforts to reach political solutions for the crises in the region, especially in Syria, Libya and Yemen, as per a joint statement released at the end of the summit.

Hassan Abu Taleb, expert at Al-Ahram Center for Political and Strategic Studies, said that the three countries are facing challenges and threats that have one common denominator: Turkish interventions in the region.

Abu Taleb told Al-Monitor that Egypt is using this tripartite alliance to send a message to Turkey that it will not stand idle facing Turkish colonial policies in the Arab region.

Abu Taleb added, “Turkey is being condescending in the region by violating the principles of good neighborliness, out of its greed for natural resources — just like in Libya and the eastern Mediterranean — or its desire to impose its control — like in northern Syria and Iraq. Through their alliance, the three countries want to address the Turkish scheme and foil it.”

Abu Taleb said that Egypt and Jordan support Iraq in facing Turkish interventions on its soil and want to help it to overcome its dependency on Iran, at least economically, and build ties based on good neighborliness. He added, “Cairo and Amman constitute an important Arab component for Iraq in the coming stage.”

He expects the alliance to succeed, noting that the three countries are facing changes and common security risks; the key change being the sudden declaration of normalization between the United Arab Emirates and Israel. He said that this agreement gives the Israeli policy more momentum at the expense of Arab Jordanian rights in the Palestinian cause.

“Egypt is concerned about Jordan’s future, given the challenges of the Palestinian cause and Israeli annexation plans, not to mention the 'deal of the century' that favors Israel. This is a nagging concern for Jordan and threatens its existence,” he added.

Abu Taleb added, “The challenge is how much expertise these states can garner to receive wide Arab support to protect the Arab states’ sovereignty and the stability of the region, face terrorism and deter Turkish and Iranian interventions.”

He argued that the tripartite alliance is a legitimate ambition fed by the circumstances.

Kadhimi aspires to establish a project he called “The New Levant” in order to expand economic and trade cooperation among several Arab countries and allow a more free influx of capital and technology among the project’s countries. Kadhimi pledged to propose the project to Egypt and Jordan during the Amman summit.

Abu Taleb noted that the tripartite alliance might constitute the heart of this project. “A regular cooperation mechanism among the countries and a united strategy and unified cooperation fields and policies are enough to constitute the core of any alliance,” he added.

Reports indicate that Kadhimi’s project is not only economic, but also carries political and military dimensions among the member states.

Gamal Bayoumi, secretary-general of the Arab Investors Union, said that Egypt sees promising opportunities in increasing trade cooperation with Jordan and Iraq. “These countries are the closest to Egypt — geographically and politically — and they share common interests,” he told Al-Monitor.

He said that the three countries seek to develop trade as they are members of the Greater Arab Free Trade Area, which is an agreement that aims at facilitating low customs’ trade.

Bayoumi noted that Egypt and Jordan aspire to cement Euro-Mediterranean trade ties and considered the Agadir Agreement a pillar. The agreement seeks to establish a free trade zone that includes Morocco and Tunisia, in addition to Egypt and Jordan, and enjoys support of the European Union.

He said that Egypt intends to increase electrical interconnection projects with Jordan, then export power to Iraq. Egypt and Jordan are connected by a power line that has an output of 450 megawatts (MW).

The Egyptian Ministry of Electricity and Renewable Energy is exploring prospects of increasing the output of the power line to 2,000 MW, then exporting power to Iraq and Syria at a later stage, in the framework of its endeavors to make Egypt a regional energy hub.

Egypt has three huge power stations implemented by the German Siemens company, and they have a total output of 14,000 MW. Egypt’s total average production of power reaches 54,000 MW, and it has a surplus of up to 27,000 MW.

Bayoumi said that Egypt wants to increase Jordanian investments in the country, from the current $700 million. It also aims at finding commercial markets that would boost its economic capacity and participating in rebuilding Iraq.