Egypt, Iraq and Jordan are working to establish an alliance to boost cooperation in various economic fields. 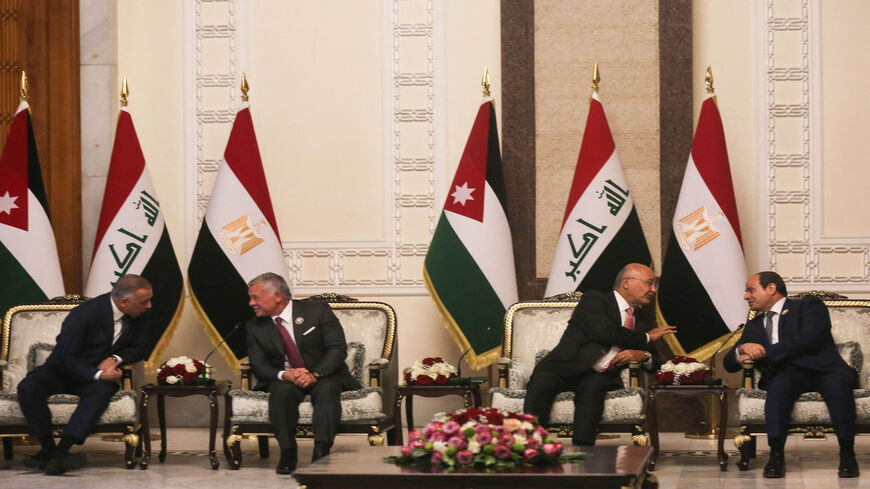 Egypt, Iraq, and Jordan are taking new steps toward forming a strategic partnership, which Iraqi Prime Minister Mustafa al-Kadhimi described as the “New Levant” alliance, based primarily on the economic and investment dimensions, and political and security aspects. The three countries held a summit June 27 in Baghdad to move forward with the New Levant project as per the political, security, economic, cultural, educational and investment agreements and understandings.

Energy and electrical interconnection projects top the list of economic interests between the three countries, while Baghdad and Cairo support the Jordanian role in the region to fight terrorism.

Ahmed Zaki, director of the Department of the Arab Mashreq, Islamic Organizations and Gulf Cooperation in the Egyptian Commercial Service, told Al-Monitor, “The value of Iraqi investments in Egypt is about $490 million, carried out by about 3,329 Iraqi companies, with capitals exceeding $724 million. Iraq comes in 25th place among the countries investing in Egypt, with 25% of Iraqi companies investing in the industrial sector, 24% in the agricultural sector, 22% in the service sector and 20% in tourism.”

Zaki said the trade balance between Egypt and Iraq is in Cairo's favor, with a value of $116.231 million during the first quarter of this year.

He noted that Iraq is one of the promising markets for Egypt and has many opportunities for investment, trade and economic cooperation. He added that Egypt’s most prominent exports to Iraq include furniture, cotton, dough, various food ingredients, medicines, oils, iron, silicone, dried onions, soap, cleaning supplies, tiles, ceramic sanitary ware, agricultural crops, clothes, petroleum and carbon products. Egypt also exports vegetables and fruits to Iraq, while it imports chocolate and cocoa products, he pointed out.

Economist Khaled al-Shafei told Al-Monitor that the tripartite summit between Egypt, Iraq and Jordan will create a great economic rapprochement, in light of the cooperation between the three countries in several fields, including trade in goods, services and raw materials.

He said that economic cooperation between the three countries will expand in the coming period, namely when it comes to electrical interconnection projects, as Egypt seeks to become a regional center for energy and export gas to Jordan. This, he said, will lead to further rapprochement as well.

Shafei noted that the New Levant alliance is based on maximizing the use of the resources of the three countries. He mentioned a project to extend an oil pipeline from the Basra port in southern Iraq to the port of Aqaba in Jordan and then to Egypt, through which Jordan would buy Iraqi oil at a price lower than the international market price.

He explained that Egypt will also benefit from the process of refining part of this Iraqi oil on its territory, while Iraq imports electricity from Egypt. Iraq can also benefit from Egyptian expertise in the reconstruction process, in addition to making the most of Jordan’s capabilities in the field of transportation, not to mention exporting goods from Jordan and Egypt to Iraq, he added.

Shafei pointed out, “Egypt's economic orientations reflect the plans of economic decision-makers in Cairo to move toward major economies, and show Egypt's efforts to benefit from the experiences of all successful countries and try to adopt economic ideas that serve the Egyptian economy, and not to limit economic cooperation to one country only.”

Qadri Ismail, dean of the Faculty of Economic Studies and Political Science at Alexandria University, told Al-Monitor that the Egyptian cooperation with Iraq and Jordan currently comes in response to other regional powers seeking to take advantage of Iraq’s great economic capabilities.

He said that Egypt has begun to emerge regionally by strengthening its relations with Arab countries, and its important role in Iraq comes in light of the common economic interests, which are represented in Egypt's import of Iraqi oil, in exchange for Cairo’s participation in the reconstruction process.

Ismail explained that the economy represents the largest player in the Arab region during the coming period, in light of the normalization initiated by some Arab countries with Israel, which entails the establishment of a Middle Eastern market to be managed by regional powers. Thus, Egypt must strengthen its presence in the Arab countries in order to ensure a prominent role during the next stage, he explained.