Egypt is seeking to expand its participation in the reconstruction of Iraq amid a growing alliance between Baghdad, Amman and Cairo. 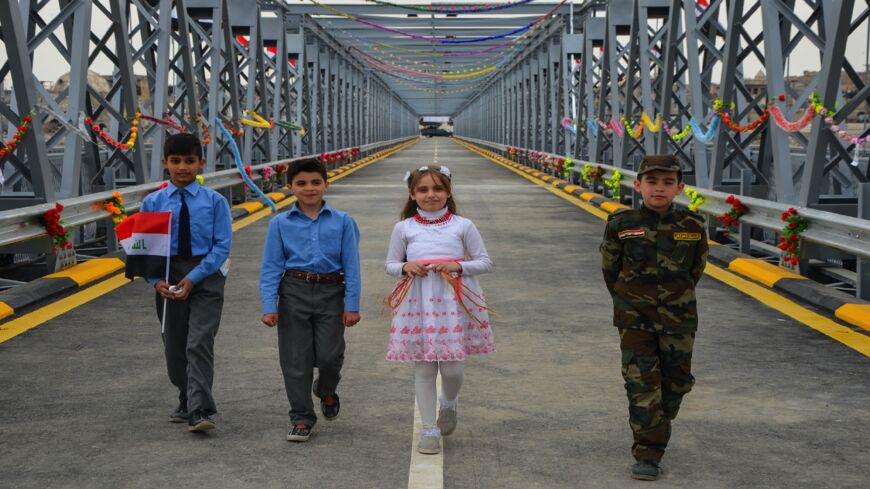 Iraqi children are seen at the Ninevah Bridge, previously known as Mosul's Old Bridge, during an inauguration ceremony following its reconstruction in the city of Mosul on March 14, 2018. - AHMAD MUWAFAQ/AFP via Getty Images

CAIRO — An Egyptian state company announced May 28 the restoration of four bridges in the Iraqi city of Mosul.

The rehabilitation of the bridges was put up for international bidding, and the tender was awarded to Nasr General Contracting (Hassan M. Allam), a subsidiary of the Holding Company for Construction and Development of the Ministry of Business Sector. The company is currently negotiating to build a new bridge in Kirkuk, thus paving the way for a broader Egyptian participation in the reconstruction of Iraq.

The Egyptian involvement in Iraq’s reconstruction points to the growing alliance between Cairo and Baghdad, according to Egyptian officials and observers.

In this context, the Ministry of Business Sector said in a statement on May 28, “This (rehabilitation of the bridges) comes within the framework of the Iraqi reconstruction process and as part of the Egyptian companies’ contribution to these projects, especially in the field of infrastructure, in light of Egypt’s capabilities, expertise and efficiency.”

The May 28 announcement preceded the visit to Baghdad of Hisham Abu al-Atta, chairman of the Holding Company for Construction and Development, where he met with Iraqi officials.

Abu al-Atta told Al-Monitor these projects mark the beginning of cooperation between Egypt and Iraq and Cairo’s growing participation in the reconstruction of Iraq.

“We have six companies specialized in civil and electrical works, and I promised the officials there (in Iraq) to send them a complete file of the companies’ accomplishments over the past years, and we hope that we will have a share” in Iraq’s major projects, Abu al-Atta said.

In November 2020, Egyptian Prime Minister Mustafa Madbouly and his Iraqi counterpart, Mustafa al-Kadhimi, signed 15 agreements and memoranda of understanding for the reconstruction of Iraq, including the establishment of an oil-for-reconstruction mechanism, which stipulates that Egyptian companies implement development projects in Iraq in exchange for Egypt’s import of oil.

Daoud al-Jumaili, head of the Iraqi National Business Council, told Al-Monitor that Egyptian participation in the reconstruction of Iraq is “thus far shy,” as it implements projects that are based on the government’s investment budget or on foreign funding bodies through donor countries. He called for the Egyptian private sector to also take part in the process.

Cairo has been interested in the reconstruction of Iraq since 2018 after the collapse of the Islamic State (IS). Egypt participated in conferences to support reconstruction in Iraq, while political relations between the two countries remarkably developed in 2019 in an effort to restore the Egyptian presence in Iraq to its level in previous decades.

Egyptian Minister of Housing Assem el-Gazzar said in televised statements May 28 that Egypt has become a leading country in urban development in the region, adding, “Reconstruction projects in these countries will cost billions of dollars. There is competition between states over their share in the reconstruction process, and I expect Egypt to play a major role in these projects.”

He added that Egyptian companies are applying a new bidding system called EPC+Finance, which provides financing for projects either from local banks or foreign parties, with the aim to compete for the reconstruction project.

Meanwhile, Egyptian and Iraqi officials have intensified their meetings and visits in recent months since Madbouly’s visit to Iraq at the end of October 2020, where he attended the first meeting of the Egyptian-Iraqi joint committee in nearly 30 years.

The volume of trade exchange between Egypt and Iraq amounted to $1.65 billion in 2018, the largest between the two countries since 2003, according to the State Information Service.

Kamal el-Desouky, deputy head of the Building Materials Chamber at the Federation of Egyptian Industries, told Al-Monitor the participation of Egyptian companies in the reconstruction process in Iraq boosts Cairo’s chances of gaining a foothold in regional countries that are about to witness a reconstruction process, such as Libya. Such participation also promotes Egyptian labor and increases Egyptian exports of building materials, he explained.

On March 1, Egypt, Iraq and Jordan announced the launch of a land route to transport passengers between the three countries.

“The situation has widely changed in recent years, as Egypt has begun to regain its economic presence in Arab countries such as Iraq and Libya with the emergence of its political role,” Desouki went on to say.

Jumaili said that Cairo has human, mineral and building material wealth that Iraq needs, in light of efforts by Egypt to transfer the experience of the administrative capital to Iraq.

The relationship between Cairo and Baghdad has remarkably developed since 2019 both at the bilateral level and in the context of the emerging alliance between Iraq, Egypt and Jordan. The leaders of the three countries, namely Egyptian President Abdel Fattah al-Sisi, King of Jordan Abdullah II and Kadhimi, held two summits in Amman and Cairo in the past months, while a third summit is scheduled to bring them together in Baghdad soon.

In an interview with the Egyptian newspaper Al-Ahram, Kadhimi expressed March 28 his enthusiasm for cooperation with Egypt and Jordan, saying, “The economy will unite us and bring our political views closer together.”

Chatham House said in an analysis published in May that the alliance between Egypt, Jordan and Iraq has a clear political goal, which is to counter Iranian influence in Iraq not through direct or indirect military means, supporting proxies or even carrying out covert operations, but by strengthening economic ties, encouraging population exchanges, increasing security and counterterrorism cooperation, and tying the three countries together through extensive and expansive energy infrastructure.

Former Deputy Foreign Minister and member of the Egyptian Council for Foreign Affairs Rakha Ahmed Hassan told Al-Monitor Iraq is well aware of Egypt's capabilities and laborers given that Egypt had a large presence in the country under former Iraqi President Saddam Hussein, and there is potential to expand participation in the reconstruction field.