The tripartite meeting between the foreign ministers of Egypt, Jordan and Iraq, and the ensuing agreements to boost cooperation raises questions about a nascent alliance that could confront Iran’s growing influence in the region. 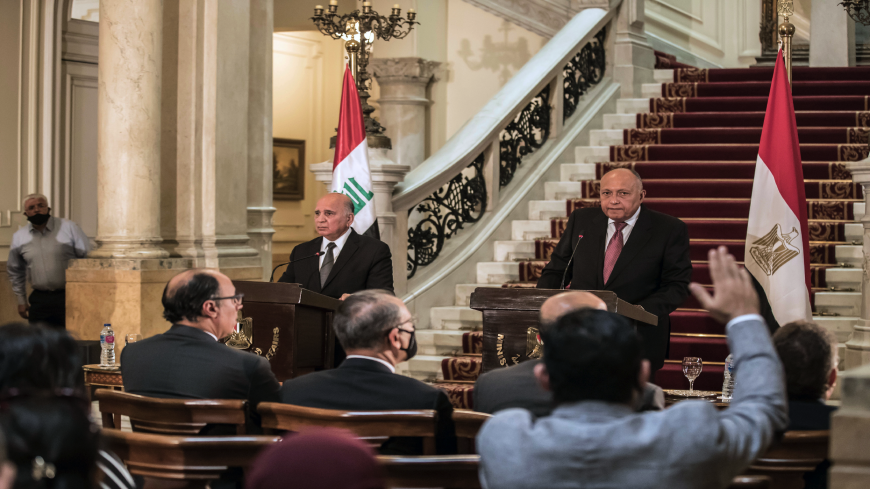 CAIRO — The foreign ministers of Iraq, Egypt and Jordan met Oct. 13 in Cairo to discuss a joint coordination mechanism. The meeting raised the question of whether an Arab alliance is emerging in light of the growing coordination between the three countries.

In a joint press conference with his Egyptian and Iraqi counterparts following the meeting, Jordan’s Foreign Minister Ayman Safadi said, “Our security is one and our future is one. Bringing about a common Arab security requires greater cooperation.”

Egyptian Foreign Minister Sameh Shoukry stated, “There is total consensus on the importance of maintaining the stability of our countries and Arab entourage and not interfering in their affairs.”

He noted that the three discussed ways to activate cooperation frameworks in the fields of energy, reconstruction and electricity, on the basis of this political and economic consensus.

Iraq’s Foreign Minister Fuad Hussein said the meeting focused on economic issues and ways to establish a mechanism for the continuation of their joint action. He said they prepared the agenda of the next meeting that will be held at the leadership level, without specifying a date.

He added, “We discussed projects in the energy field … and reconstruction, especially in Iraq where many cities are destroyed. We focused on ways to benefit from Egyptian and Jordanian companies in this field and help the Iraqi people rebuild their cities.”

Prior to the tripartite talks, Egyptian President Abdel Fattah al-Sisi had met with the Jordanian and Iraqi foreign ministers in two separate meetings. Sisi stressed that “the joint coordination, the willpower and unity of Arab positions would impose the setters and lines of Arab national security.”

The recent talks come as part of the implementation of the mechanism agreed upon at the tripartite summit held between Sisi, King Abdullah II of Jordan and Iraq’s Prime Minister Mustafa al-Kadhimi on Aug. 25 in Amman.

At that summit, Kadhimi proposed a new Levantine project, in line with the European format, to be based on mutual political and economic understandings between the three countries.

Rakha Hassan, a member of the Egyptian Council for Foreign Affairs, told Al-Monitor that the recent meetings reflect the growing close cooperation between the three countries, as they share a unified vision on regional issues in the absence of joint Arab action.

Hassan said the current Iraqi government is seeking rapprochement with Arab states, away from Iran, and is thus working hard to achieve stability and consolidate state control over weapons in order to start rebuilding the country.

“Egypt has extensive experience in the infrastructure sector, and Egyptian construction companies are ready to take part in the reconstruction of Iraq. Also, Jordan will be an important link between Baghdad and Cairo in any energy transfer lines,” Hassan added.

Hassan also spoke about challenges that may affect the tripartite cooperation, such as the Iraqi pro-Iran factions’ opposition to the state’s control of arms, the ongoing conflict between Iran and the United States on the Iraqi arena, and the Turkish intervention in Iraq.

Hassan Nafaa, a professor of political science at Cairo University, described this tripartite cooperation as “an alliance of necessity, given the difficult circumstances that these three countries have gone through.”

While the Iraqi government struggles to impose control over its own territory in preparation for the reconstruction of the cities that the Islamic State destroyed in the past years, Jordan is suffering from a severe economic crisis and Egypt has been implementing a strict economic program since 2016. The program has exacerbated the social and economic crises in Egypt, as almost a third of the population suffers from poverty, according to official statistics.

Nafaa told Al-Monitor that the rapprochement between the three countries is not initially of a political nature but concerns commercial and economic goals.

The ministers of trade and industry of the three countries held a video conference on Oct. 4 in which they agreed to start cooperating in four sectors, namely in the pharmaceutical, chemical, textile and ceramic industries, provided that each country prepares lists of companies and investors interested in building partnerships in these fields and shares them with the other countries within 10 days.

Abdul Hussein Shaaban, an Iraqi researcher, said the nascent axis can only succeed by “turning these agreements into plans and projects that are applicable on the ground.”

He told Al-Monitor, “It is too early to say that a new alliance is being formed since a strategic alliance requires a long time to be established. Yet, if achieved, it will benefit the peoples of the three countries and joint Arab action.”

The three countries had previously formed the Arab Cooperation Council in 1989, alongside Yemen, at the initiative of late Iraqi President Saddam Hussein. The council collapsed a year later following the Iraqi invasion of Kuwait in 1990. Shaaban commented that “the new cooperation comes at a time when the Arab world suffers from severe religious and sectarian divide, armed conflicts and civil wars.”

“Nevertheless, the emerging axis can play a political role as well, given the lack of any Arab project in the Arab region in the face of the nationalist hegemony projects, such as the Iranian and Turkish projects, or the Israeli project that seeks to expand at the expense of the Arabs,” Shaaban explained.

Commenting on the position of the Gulf states, he said, “I do not think that [the Iraq, Egypt, Jordan axis] will turn into an axis in the face of the Gulf Cooperation Council. Egypt and Jordan have close relations with the United Arab Emirates and Saudi Arabia, and Iraq is trying to improve its relations with the Gulf countries and calls on them to understand its special case as an arena of Iranian-US conflict.”

“Any limited or broad Arab alliance will seek to boost relations with Saudi Arabia, given its pivotal role at the regional level and ahead of the G20 Summit, which Riyadh will host next month,” Shaaban added.

Nafaa agreed, saying, “The Gulf states understand the need for an emerging alliance and indirectly encourage it in the hope that it will manage to push Iraq away from Iranian hegemony as much as possible.”